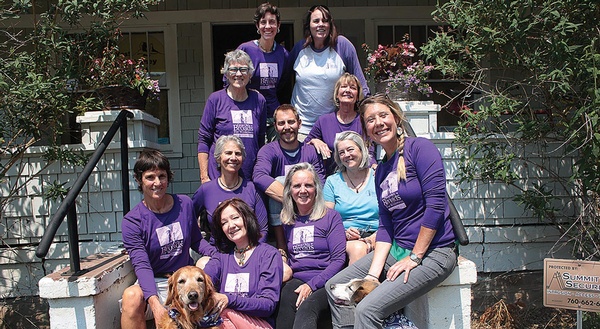 Old Broads, new Broads, four-legged Broads and even a Bro sit in front of the Great Old Broads for Wilderness HQ on College Drive and 7th Ave. The Broads will be imparting their wilderness-saving knowledge in August at their Women's Advocacy Leadership Training./ Photo by Jennaye Derge

So your national forest is closed due to a wildfire that may or may not have been started by the chief economic choo-choo of your beloved hometown. Your access to public lands – your playground and place of worship – is prohibited, pending the heavens releasing a deluge. Till then, hungry flames lick ponderosas to charred sticks sending wildlife into a frenzy and scaring the daylights out of homeowners, who are more than ever heavily aware of the cost of dwelling in paradise.

Below the swollen, ashy tower, houses perched in the woods look miniscule, much like the buckets of water carried by helicopters. But you can't linger in that dark place for long, so you buy socks for firefighters. You drop off popsicles for CDOT workers. You consider volunteer firefighting. You donate as much as your meager bank account will allow. And then another smoke-choked morning clears to a June-blue sky with an ominous pinkish plume looming to the north. Doom and gloom, you think, and then you remember Silverton. Sigh.

Wilderness: nothing reminds us how small we are as quickly. Usually it's a delightful, benign experience, like looking up at the walls of Grand Canyon. Climbing volcanoes in Guatemala. Riding singletrack in the San Juans. But then the river devours, the tsunamis devastate, the molten lava destroys, the forests burn. Mother Nature shakes her head at you, ye of little power.

So why do we pour our hearts into protecting her? Why do we live to be near her, in her? It's primal, a tug on the soul that draws us away from the coasts and the Front Range. Yet we take for granted that these wild places and open spaces will exist forever – until a disaster smacks us upside the head. Yet another circumstance reminiscent of the feelings churned by November 2016 that has given us no choice but to get the hell involved.

So often we forget that the never-ending battle to protect wilderness is fought by frontline defenders who come in all packages: beards and flannel, suits and ties, chicks with armpit hair, and grannies with rolling pins.

This latter category of the wizened woman was a soft voice until 1989, when a group of sun-kissed, sexy sexagenarians was tagged for duty, thanks to the not-so-smooth-talking of Utah Sen. Orrin Hatch. As the longest serving Republican senator in U.S. history, Hatch has quite the laundry list of Things That Rile Up Liberals. But, in 1989, he made a statement that set in motion a new meaning to the term "active senior."

It was the 25th anniversary of the Wilderness Act. The last mapped area of the U.S., Escalante, Utah, was up for wilderness designation. Hatch was against it, touting, "If for no other reason, we need roads for the aged and infirm.” Clearly he'd never lived in a mountain town.

The sentiment struck a chord with feisty, red-rock advocate Susan Tixier, and it took no time to rally her sophisticated female hiker friends. These boomers didn't need roads. Rather, the environmental movement needed them, and they needed a name to unify their quest. The story goes like this:

One fine day while the original-gangster, Tixier-led group (OGTL) was hiking and discussing what action to take, a band of dusty, tan, sinewy and gray-haired ladies was coming off the trail. Someone in the OGTL gang remarked, “What a bunch of great old broads."

Broads. The term captured perfectly the essence of "the budding entity they envisioned, emphasizing the old and the feminine." Twenty-nine years later, the Great Old Broads for Wilderness (Broads) thrives as one of the nation's leading grassroots conservation advocacy nonprofits. With style and humor, they're mission "to preserve and protect wilderness and wild lands" for their grandchildren's grandchildren.

The first five years of the organization were dues free, and any woman who declared herself a member was one. She'd buy a Broads T-shirt, and then the rest of the world would know. Kitchen tables served as the informal headquarters until 1993, when the cost of furthering the cause got too expensive for amateur hour. So members had to put their money where their mouths were, and dues were managed by the first official staff person hired in 1994.

In 2008, the Broads launched Broad-bands, or chapters, in 15 other states. The Broadbands have since grown to 40 strong, blossoming into the backbone of the Broads, which now celebrates 8,500 members and friends, including Training Broads (younger broads) and even some Great Old Bros. With the mentorship, training and resources of the Broads headquarters in Durango, no less
than 73 leaders guide on-the-ground, all-volunteer wilderness and public lands protection campaigns from east to west.

From monitoring established wilderness to urging Congress to designate new wilderness, the chief duty of the Broads is to educate communities about threats to public lands. They're the voice at town hall meetings, the authors of letters to the editors, the protest marcher and face for the cause, meeting with elected officials and decision makers.

"We hold these federal (land management) agencies accountable for what they say they want to do in management plans and, at the same time, we help them out as their eyes on the ground," Robyn Cascade, co-leader of the Northern San Juan Broadband for Broads, says.

With a background in public education and a couple seasons as a wilderness ranger for the Forest Service, Cascade brings knowledge in facilitating collaborative partnerships to protect wilderness in the San Juans. Fairly new to the San Juans as of 2008, 59-year-old Cascade grew up playing in the salt marshes of the Northeast and sailing her little Sunfish into the Atlantic to find wide open spaces.

"I came to Colorado for the land," says Cascade. "There are just too many people out east."

With the support of the national office, one of her Broadbands' most recent campaigns includes advocating for the passage of the San Juan Mountains Wilderness Act, which would protect approximately 60,000 acres in the San Juan Mountains from mining, oil and gas development. Another is their involvement in the Grand Mesa-Gunnison-Uncompahgre National Forests (GMUG) forest plan revision. "Broads has a unique vision and way of operating," explains Cascade. "We're more than policy. There's heart to it. We can advocate till we're blue in the face, but what keeps us sane is sitting by the bubbling brook, listening to the birds." A major role she plays as a Broadband co-leader is mentoring the next generation of public lands activists. This aspect of sharing advocacy tools with younger women is one of the cornerstones of the Broads. In light of this responsibility, the national office hosts weeklong grassroots advocacy and leadership trainings for Broadband leaders, who vary

from retired lawyers and accountants to grandmothers. This Aug. 2-3, Broads take this acclaimed model public, offering a two-day Women's Advocacy Leadership Training at Durango Nature Studies. The workshop creates space for women of all ages to hone in on their leadership skills and learn how to apply viable strategies to help bring their campaigns – conservation or otherwise – to fruition. Designed for staff or volunteers, the training will help build momentum for community change and social justice causes alike.

"We'll focus on discovering the 'why' behind your work so that you're more able to bring others into it," says Broad's Grassroots Leadership Director, Lauren Berutich.

A younger broad than most, 39-year-old Berutich is the perfect fit for the Broads with over 10 years of experience in environmental education, stewardship and sustainable community development.

"The work is endless," says Berutich. "But knowing that others are out there working tirelessly to fight the good fight really fires me up when the times are hard."

She adds that "Broadness is a state of mind," so you don't have to be a woman to join, which didn't even cross Mike Kruse's mind when he applied to be the Broad's Grassroots Leadership Coordinator this spring. Kruse, 33, grew up in Michigan and got his travel bug and passion for public lands from a radical broad also known as his mother.

He found the Great Old Broads after digging around for work in public lands advocacy and was struck by how affective the Broads is as a grassroots organization. So he applied.

"It's the one instance where affirmative action could work for a white male," laughs Kruse.

So if the fire’s got you down, it's time to realize that you can do more than donate socks. You can join the fight for public lands. And, if you don't know where to start, sign up for the Advocacy Leadership Training. Whatever you do, don't wait till you’re 60 to realize you have a voice (unless you are 60, in which case, welcome aboard!)

"It's great to see these wild women speaking up and getting after it," says Kruse. "You see these gals doing it, and it's really inspiring for everyone. They're pretty bad ass, don't back down, and bring amazing experience."

And, when in doubt, keep donating popsicles and eating brunch downtown because only YOU can prevent economic disaster. #SilvertonLove