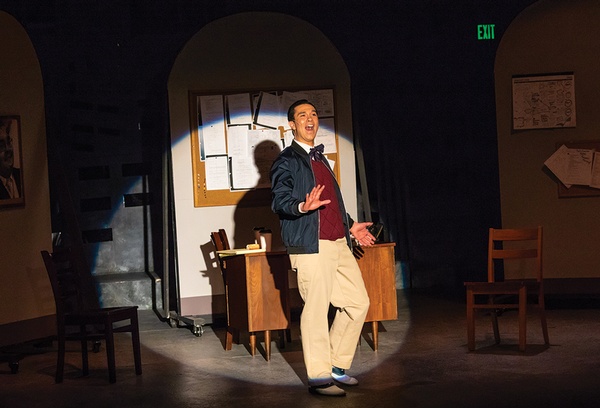 Most of us don’t actually want America to return to the 1950s, but wouldn’t it be sweet to slip back in time for the best parts of that so-called simpler era? For two hours a day through this weekend, that’s exactly what you can get at the Fort Lewis College Theater.

The spring theater production at FLC is “My Favorite Year,” a musical by Joseph Dougherty, Stephen Flaherty and Lynn Ahrens, and directed by Theresa Carson. The musical is based off the Peter O’Toole movie of the same name, and while it is set squarely in the ’50s, the stage production itself debuted in 1992.

The musical revolves around a fictional variety show, the “King Kaiser Comedy Cavalcade” (which blissfully spares us the use of gratuitous initial K’s) and its wet-behind-the-ears junior writer, Benjy Stone (played by Gustavo Palma). Stone guides the audience through the nostalgia for his past – this was not, he says, his best year, his most successful year, but it was his favorite year, because of all that comes from getting to write a sketch for his long-time movie idol, Alan Swann (played by Harrison Wendt).

A mild spoiler-alert here, since audiences learn all this in the first 10 minutes or so: Swann’s star has washed up, as evidenced by the fact that he’s moving from the silver screen to TV. He’s constantly “blotto,” as the kids said in those days, and likes to roam the town. Stone is tasked with keeping Swann sober and chaste until the show airs.

And thus, the stage is set for Stone to work out his various problems: he is unsuccessfully wooing his coworker, K.C. Downing (played by Hallie Denman), has an over-bearing Jewish mother (played by Erin E. Natseway) and a new boxer-turned-chef stepdad (played by Tyler Gleason), and is still grappling with his father walking out on him as a child. He took on Swann’s film characters as surrogate father figures, and now, the actor (who isn’t such a great dad himself) is perhaps different than Stone cracked him up to be. Not to mention, it’s hard to get your sketches on the air as the new guy on the staff.

In many ways, “My Favorite Year” is like a musical theater version of “30Rock.” Yet that sitcom’s predecessors are foreign material to many of the FLC students performing in the production. “It’s like a cross between Dick Van Dyke and Carol Burnett,” director Theresa Carson said. “That’s what I’ve been using as models and research, and we’ve been talking about them as a cast.”

One of the challenges in staging this musical is embodying the character of the 1950s. When putting on a period piece set out of living memory, we all draw on the same cultural references, the same movies, the same books, to cobble together a sense of, say, Victorian England. But plenty of audience members remember the ’50s and its television series vividly. And many of the cast members? Well, they don’t.

“Our whole style, our whole essence today in 2019 Durango is so different,” Carson said. “I’ve been coaching Gus (Palma) about the difference in how we hold our bodies, how we talk. It’s just getting us out of our modern-day vocal patterns, physicality.”

dency to play this young writer with a sarcastic bent. His performance makes this production what it is, considering that he is on stage for more than 90 percent of the time.

Other standouts include Wendt, who carries a worn worldliness with him as the faded star; Denman’s straight-backed portrayal of the square inge?nue; and Natseway as the loud-as-life, willfully and endearingly invasive mother.

As one might suspect with a musical centered around a variety show, the cast of characters is hardly slim. Right from the opening scene’s number “Twenty Million People,” we see a Viking, a rabbit, an Egyptian, an astronaut, showgirls, and enough other costumes to match Third Avenue on Halloween. We know right away we’re in for an eclectic night.

The script itself leaves something to be desired. The play lacks the structural soundness of the more enduring musicals, and many of the songs fail to reveal character depth and find synthesis the way the best Broadway numbers do. Still, the performances are full of heart, and this musical whisks us on a nostalgic tour, whether we remember the ’50s or not.

“Our Durango community is so supportive,” Carson said. “They really love the musicals.”

What: “My Favorite Year”