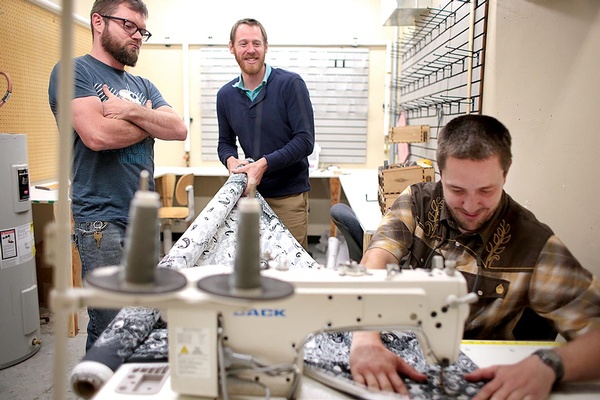 From left: Ryan Finnigan, Brian McDonagh and Brandon Walter collaborate on what to sew on one of two industrial sewing ma- chines at MakerLab HQ, next to the Powerhouse./Photo by Jennaye Derge

My older sister is notorious for tinkering with things. Growing up, she would take apart all my toys while I was off playing with my best friend next door. I would come home to her sitting down with a screwdriver in one hand and my Furby’s electronic guts splayed across the carpet. I cried as I watched her try to put my dead toy back together. As much as I doubted her though, and aside from a small twitch in Furby’s right eye, she would almost always put everything back to working order.

Little did she, or anyone, know at the time: my sister had started her own, small version of a makerspace right in our living room. Today, makerspaces exist across the country and the world offering spaces for people who, like her, enjoy tinkering. Makerspaces have special equipment such as 3-D printers and industrial sewing machines to facilitate creativity and invention, but with less broken toys and tears from little sisters. These makerspaces not only exercise creative brains, but help to assemble like-minded people for collaboration and provide resources and education that may not be available otherwise.

Co-founder of Durango’s bubbling inaugural maker-space, coined “MakerLab,” Ryan Finnigan suggests that makerspaces are a space where one can go to invent or just to network. “(You can) build a robot if you want, a fire-breathing sculpture or make a dress,” he says. The MakerLab operates just like a club of any sort, whereby members pay dues for access to its amenities. “Just like a rec center, we pitch in together to have monthly memberships so that we can all have access to all this great fancy workout equipment,” Finnigan says.

It was about five years ago when Finnigan, a metal fabricator by day, began to see the need for such a resource. He felt there was a void for technological and inventor-based education locally and saw a need to keep people ahead of the ever-accelerating high-tech curve. So Finnigan, along with two cohorts – Brandon Walter and Alexi Carey – created Durango’s MakerLab. In its earliest stages, Durango MakerLab offered after-school and summer programs to kids on science, technology and creativity based out of the Powerhouse Science Center. Today, after a lot of planning and a merge with the Powerhouse, MakerLab has a home of its own in the Powerhouse’s old administration building on the south side of the court-yard – making it the Four Corners’ only dedicated makerspace.

The space is made up of five rooms, most providing high-tech and programmable machines such as laser cutters and a CNC (computer numerical control) mill for carpentry. One room is filled with industrial sewing machines, and another serves as a classroom or extra work space. The lab offers monthly and annual memberships, or if all you want is to tinker for a day, day passes are also available. There will be free mingle nights every Friday and the lab plans to offer other free community classes to welcome the general public.

The makerspace culture in the United States began in San Francisco in 2006 at the TechShop, which, in its first year, saw seven of its original 300 members go on to launch multi-million dollar companies. (One of these was “Square,” that little credit card swiping device that attaches to smartphones and personal tablets.)

Likewise, Finnigan hopes that area innovators with entrepreneurial intentions will use the MakerLab to spread their wings and give flight to ideas such as these. “We’re hoping that people will bring their business ideas and create their prototypes here,” Finnigan says. He added that the MakerLab will be the perfect place to create anything from mock-up samples of a business idea to computer coding.

The new MakerLab director, Brian McDonagh, assures that anyone, even a self- proclaimed science and technology dummy such as myself, can walk in, get a day pass, and within 40 minutes have a basic safety training and some idea of what the machines do. I called his bluff, but he promised that if, in a year, he only sees one type of person attending the MakerLab, he has not done his job. His goal is to have MakerLab appeal to anyone and everyone who wants to collaborate on ideas, projects or share knowledge.

Finnigan agrees. “We’re really excited to see what the members want to teach. It’s an information-exchange model, and this education philosophy is lateral. It’s the community teaching the community,” he says. “You don’t have to be a professor to teach, if you have a passion, if you have a curiosity, if you have a hobby and you want to share it, come and share it.”

And who knows? Maybe in the process people will discover something new about themselves. “Maybe someone comes in knowing coding and will leave with a love for sewing,” Finnigan says.

So far, the maker crew agrees that the most interest is in welding, and there is even a “women, welding and wine” class in the works. Yes, that’s right, the MakerLab also has its liquor license, which will come in handy for those Friday happy hour meet ups, or if, as McDonagh suggests, you want to create a robotic shot glass and need to test it out.

“It goes back to being collaborative. It’s a place for people to feel safe, feel happy,” McDonagh says.

Although the inaugural maker group – Finnigan, McDonagh, Walter and Carey – takes their jobs seriously, in the end, they want to have a fun, laid back spot where friends, ideas, futures – and maybe even fortunes – can be made. Because, as Finnigan puts it, it’s either keep up or get left in the cyber dust.

“Current projections are looking at a 38 percent job loss in the next 15 years alone in the United states to robotics and AI,” he says. “Makerspaces are putting these tools back in the hands of people so we feel empowered to continue to be makers and cre- ators and also find roles for ourselves.”

He also says they will enable us, as a society, to broach the grander conversation about what it means to be dominated by automation and robotics. “We need to be able to understand those technologies in order to have reasonable and ethical conversations, so makerspaces are going to be very important in the next 15 to 20 years – they’re important today,” Finnigan says.

It’s a heavy thought, but with enough light-up robotic 3-D printed shot glasses, we can all have a drink and at least be grateful for collaboration, innovation, creativity and some new friends. 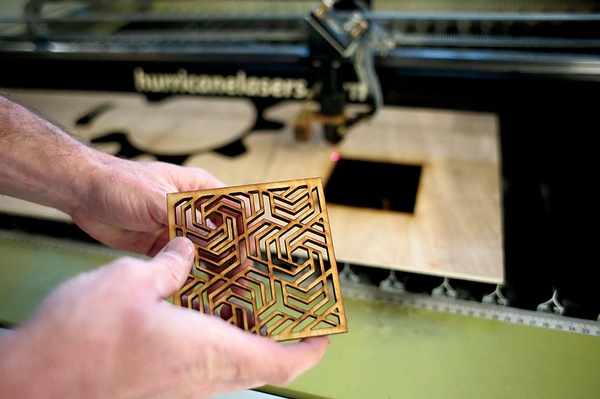 A thin, hardwood coaster cut by a laser cutter derived from a design on a connected computer./Photo by Jennaye Derge

Durango’s new MakerLab is slated to open the beginning of July. Memberships are available for $45 general; $65 advanced; and $90 for a family membership. Got a special project? A three-day punch pass goes for $30 and day passes are $12.

For more information, go to www.durangomaker.com