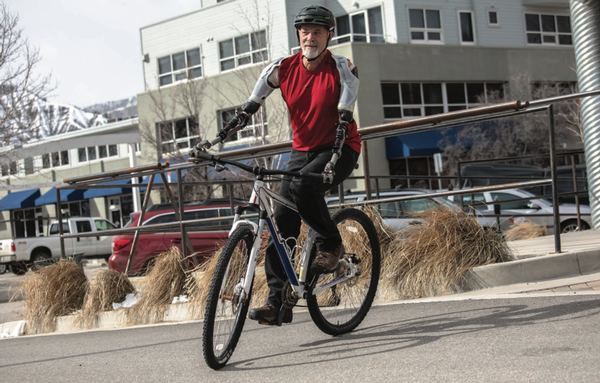 Otto Yerke takes his new robotic arms for a spin recently at 2nd Ave. Sports. Yerke, who formerly lived in Montrose but now lives in California, was put in touch with local prosthetist Bryan Lott, of the Hanger Clinic. Lott put together a local "dream team" that helped customize not just Yerke's arms but his bike so he could better enjoy his favorite pastime./Photo be Stephen Eginoire

On June 2, 1861, three months into the Civil War, 18-year-old James Edward Hanger enlisted in the Confederate Army. As rain fell heavily the next morning, surprise gunfire from the Union Army unleashed on the shoddy Rebel cavalry. Hanger, who was on guard duty, leapt from the hayloft to his horse just as a cannonball ripped through the stable walls, ricocheting smackdab into Hanger’s leg.

Four hours later, the unconscious lad received the first documented battlefield amputation, a procedure performed by Union doctor, Dr. James Robinson, who removed Hanger’s leg 7 inches below the hip. Hanger was fitted with a peg leg and held captive until a prisoner exchange returned him home to Virginia. There, the former engineering student immediately got to work whittling away at an oak barrel stave, attaching hinges to create what would become his new “artificial leg.” In 1871, Hanger got a patent for the device, setting into motion the next era of advancements in prosthetic technology.

Nearly 160 years later, the Hanger Clinic thrives as a $1-billion-plus company providing prosthetics and orthotics for amputees around the globe. Like Hanger, many amputees are war veterans or victims of trauma, but the rise of prosthetics in the last decade is largely due to aging baby boomers and an increase in diabetes, Bryan Lott, clinical specialist with Durango’s Hanger Clinic, says.

“Amputees will tell you that people assume they’re vets and thank them for their service,” says Lott. “My dad, who has a lower-leg amputation, jokes that it was a shark attack when really it’s from too many running injuries and surgeries.”

Lott discovered the industry when his dad, an elective amputee, was showing off his prosthetic leg and suggested Lott pursue a career in prosthetics. Seems like a weird job, thought Lott. Weird, but intriguing.

A project manager for homebuilders in Santa Fe, Lott was struggling during the housing crash of 2008 and ready for something fresh. So, he and his wife, Megan, spent the evening Googling what it would take to break into the field of prosthetics. He woke up the next morning resolved to go for it.

Lott enrolled in a distance-learning certificate program through the University of Hartford and started as a volunteer tech at the VA hospital in Albuquerque. The work was menial, mixing plaster, pulling plastic over molds, and sweeping up messes. Lott spent any spare moments trying to see as many patients as possible. Meanwhile, he unraveled the mysteries of biomechanics, kinesiology and materials science, learning the differences between orthotics – which focuses on bracing, diabetic shoes and spinal halos, for example – and prosthetics, or artificial limbs. As a climber, Lott felt a strong connection to prosthetics. He loved the study of human body movement, balance and how subtleties in alignment could mean sending a project (or not), or how, in prosthetics, alignment addresses function (or not).

When he completed his post-graduate certificate in prosthetics (CP), Lott landed a year-long residency at the Hanger Clinic in Albuquerque. He primarily worked with patients requesting devices for everyday activities, such as lower-extremity amputees in need of a foot or leg. On the other hand, most upper-extremity amputees can lean on their, er, other hand to, say, brush their teeth.

For those actions and hobbies that involve two hands, like golfing or fly fishing, activity-specific devices come to the rescue. A baseball mitt can be attached to an arm, for instance. In our neck of the woods, climbing-specific or cycling-specific devices are hot-ticket items.

Lott was naturally drawn to wielding prostheses for these adventure-prone patients. He recognized a developing niche at the Hanger Clinic in Durango, where he envisioned a mecca for outdoor athletes with missing limbs.

“It’s totally self-serving,” says Lott. “Mountain sports athletes are the most awesome population to work with.” He scored an interview, and while in Durango, ducked into 4Corners Riversports. Co-owner Tony Miely chatted him up, and Lott couldn’t help but notice that Miely was missing his right hand. It had been squashed at the wrist during an ATV accident in 2009. Unabashed by the scenario, Lott blurted out that he was in town interviewing for a job as a prosthetist and would love to assist Miely. Miely was thrilled with the thought of access to adjustments that didn’t involve a drive to Denver.

Lott got the job at Hanger in 2011 and moved his family to Durango. He reconnected with Miely, who brought his collection of prostheses that included fixtures for everything from kayaking to lawnmowing. Miely shared with Lott his observations about how each worked well – or didn’t. Lott took notes and contemplated solutions.

“The problem-solving takes trips to Home Depot, sketching out ideas, 3D prototypes, and all the brain work,” says Lott. “Sometimes everything gels and sometimes it doesn’t, so we try something else. You have to take your ego out of it and remember that there’s a human on the other side of the device.”

For kayaking, Lott ordered Miely a right-hand paddle/glove fitted with neoprene for added insulation. His mountain bike gadget was a little trickier. Lott tried a Mert’s Hand, which features a ball mounted to a prosthetic hand that attaches to a socket on the handlebar with a release system akin to clipless pedals. When it was fitted to Miely’s arm though, the result was 6 inches longer than his left arm. Not ideal. Lott called the inventor, Mert Lawwill, who came up with a newfangled Mert’s Hand just for Miely.

Word of Lott’s passion for getting amputees back to their passions spread throughout Durango. When Bee Mathis crushed her foot while bouldering in Sailing Hawks in 2011, she went through multiple surgeries before asking Lott about alternatives. Over time, Mathis realized amputation would be less of a loss and more of an opportunity to get back to living her life to the fullest.

Mathis worked with Lott to conjure up prostheses for rock climbing, ice climbing, biking and whatever else her heart desired. She claims she’s stronger now than ever, a nonstop tour de force, who puts purpose behind her adventures, summiting peaks to raise awareness for underserved communities that don’t have access to prosthetics. Mathis was so inspired by Lott’s work that she switched from nursing to an exercise science degree from Fort Lewis College in 2015.

Mathis assisted on one of Lott’s most recent projects with Otto Yerke, who rides his mountain bike 20 miles a day – no matter he’s a double upper-extremity amputee. He MacGyver’ed a way to brake, bracing his foot against the handlebar and hoping for the best.

“I crashed a lot,” he smiles, adding that he doesn’t wear  helmet because it’s too hard to clip without fingers.

On Aug. 14, 1990, Yerke was working on powerlines in Los Angeles when he spotted a “bad pole” with six wires, one of which was loose. As he reached to fix it from his bucket, the truck lurched, throwing Yerke into the wires – not once but twice.

“The second time blew my arms off,” says Yerke. “I died twice: then and the next week on my 29th birthday in the hospital when I got gangrene.”

A self-proclaimed fearless adventurer, Yerke went from comfortably standing atop 250-foot poles to experiencing vertigo as he relearned how to walk without arms. But he didn’t stop with walking. Yerke picked up snowboarding through the Adaptive Sports Association. He started riding his wife’s bicycle after they moved to Montrose in 1995, but she wasn’t thrilled with what Yerke’s clawed devices were doing to her handlebars. Yerke bought a Huffy and later upgraded to the GT Karakoram hardtail he’s currently riding in his new home of Bodfish, Calif.

“Biking puts my head in a totally different place,” says Yerke. “I do all my best thinking. It’s heavenly.”

In September 2018, Yerke’s prosthetist in Grand Junction recommended Yerke give Lott a call to discuss potential myoelectric options, which didn’t work for Yerke. But the conversation drifted to Yerke’s biking, and Lott couldn’t resist scheming ways to address the unsustainable braking situation.

His big plans called for a dream team of Durango geniuses. Lott crafted arms affixed with Fox Shock elbows and cycling-specific Mert’s Hand models (the same design that was reworked for Miely). Mathis sewed the harness holding the arms together, much like backpack straps. Anthony Diaz, of Diaz Suspension Designs, custom-tuned the preload of the Fox Shock elbows. Ron Andrews, creator of King Cage water bottle cages, and Eric Tomczak, founder of Myth Cycles, developed a bracket for the butt brake that Lott envisioned. Harris Bucklin, mechanic at Second Ave. Sports, put the brake onto Yerke’s GT Karakoram and added the Mert’s Hand connections to the handlebars.

“This is what I always wanted but didn’t know it,” says Yerke, shrugging off his every-day arms and slipping into the robotic limbs designed just for his cycling pursuits. “Except after going into Second Ave., I’m screwed; I’ll be putting this setup on a new fat-tire bike as soon as possible.”

For Lott, Yerke’s contraption was an all-time project, highlighting the power of collaboration in an uber-talented community.

“When I started talking with Otto about this idea, I realized I would have to collaborate with all these people who have skills outside of health care and prosthetics,” says Lott. “It’s awesome to think outside the box and come up with solutions, but I can’t weld. I needed experts. That’s where the cycling folks came in, blending my two passions of work and fun. It was beyond rewarding to work within the community and not go outside of Durango. No arms and a butt brake? That’s pretty amazing.” 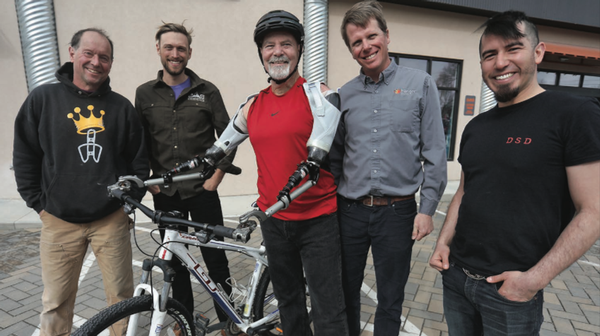