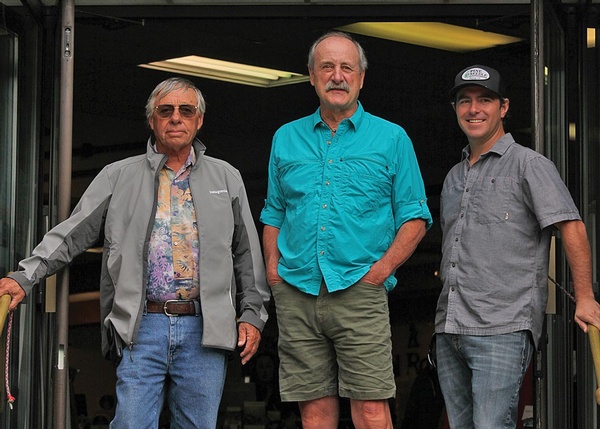 Pine Needle Mountaineering turns 40 this year, and in many ways, its evolution as an outdoor retailer mirrors the industry as a whole. It also says a little something about the town of Durango.

When you walk into 835 Main Ave. now, Pine Needle looks pretty new (except maybe the sign in the mall entrance). But if you stay a bit, you’ll notice a sliding door where the old entrance used to be, the craftsmanship of the stairwell and the main entrance, the strange steel “sculpture” high up in the south window.

Every element of the store comes with a story, and the story starts with Mel Matis.

Actually, the story starts with a fire in the 800 block of Main Avenue in 1974, which killed two people and leveled multiple businesses. But, in so doing, created space for new ones.

The Main Mall as we know it was built the following year. While the skeleton was being framed, Matis was living in Colorado Springs, teaching industrial arts to middle school students and getting anxious about a grim number of ski days.

He was born and raised in Durango, and with the guidance of Dolph Kuss – celebrated Nordic coach for the U.S. Ski Team and the first men’s ski coach at Fort Lewis College – Matis began to ski and backpack. He raced in the Junior Olympics and spent a stint racing for the U.S. Biathlon Team.

To say he knows skiing, the industry and the area is an understatement.

With a degree in business administration, a hankering for the mountains and rivers of Durango, and a promising market survey, Matis returned to his home to start Pine Needle. Together with his then-wife, Lynn, and a $35,000 SBA loan, the Matis’ opened their doors in 1976, probably September, said Matis.

With sparse inventory spread across a 2,500-square-foot space upstairs, the business grew quickly and soon expanded into the downstairs. Matis eventually built, himself, the stairs connecting upstairs and down, as well as a new entrance into the mall. He also got rid of a wall on the west side of the space in order to make more room for apparel. And in the space, no matter how big or small, Pine Needle always made it a priority to educate and cultivate outdoor enthusiasts.

“We had movie nights and demos for things like waxing and adjusting bindings,” Matis said. “And we’d offer outdoor clinics on snow caves and avalanche safety. Back then we did a whole series of summer and winter clinics.”

They also sponsored the local Nordic team and a morning radio weather report, one of their only forms of advertising in the early years.

Though some of the vendors Pine Needle first worked with have disappeared or been bought out by larger companies, Pine Needle was one of the early retailers for some lasting names in the industry.

Take, for example, Chouinard Equipment, started by the famous climber Yvon Chouinard in 1957. After a hearty journey and some legal controversy, the company sold to its employees who started Black Diamond, while Chouinard retained Patagonia.

North Face was another one of Matis’ first vendors, back when the company was only a decade old.

But those changes took time, and the companies grew up alongside the retailers that pushed their products. In many ways, Matis said, because of them.

“Companies that stick around have a good relationship with their retailers,” he said. “We’re the experts on the ground promoting their product, testing it and spreading the word. It was a good industry to be in. We had a lot of fun, all playing together.”

When Matis says “all,” he’s likely referring to the original Nordic Buyer’s Group, made up of small retailers from similar towns across the West – like Skinny Skis, in Jackson, and Wasatch Touring, in Salt Lake. Together, the owners cut their costs by placing bulk orders, and compared notes on products and vendors.

And, of course, there was some extracurricular socializing. Esther Kopf, a longtime employee and manager at Pine Needle, recalls working hard and playing hard in the outdoor industry. While most playing involved skiing, backpacking,  climbing and other ways of testing gear, Aquavit parties hold a special place in the collective consciousness of folks who've been around a while. After a night with that Scandinavian spirit, demo days were a particular kind of struggle.

Pine Needle’s first employee other than Mel and Lynn was Peter Jamieson, who went on to climb Everest and now works as a surgeon at Mercy Orthopedics. In a 1984 article in Outside Retailer, Matis assured readers: “We don’t require all of our salespeople to be of the same caliber as Peter. But they do have to be outdoor-oriented and understand the gear.”

But by the mid-90s, competition from internet sales became a problem, and Matis was ready to be out of the business.

“That really changed the whole idea of our little retail business,” Schroeder said. “That’s why it’s so important to get local support nowadays.”

Matis held onto the store through some major changes – even moving into the internet era – and sold to former manager and longtime associate Keith Roush in 2002. “Twenty-eight years of retail was enough,” Matis. “I was getting up there in my years and I wanted to do something else.”

By then, Roush had spent significant time in every corner of the industry, from managing Royal Robins apparel line to repping for Cloudveil and JanSport. When Roush bought the store, he changed it some, but not a whole lot – many of the employees were the same, and the location didn’t change. He brought in more alpine and running gear, and with him an extensive network of industry professionals.

“In an industry like this, it becomes important who you know,” Roush said. “It started as a small business and nobody has left it.”

Pine Needle is an incubator, in the same way much of the outdoor industry seems to be. Many employees go on to start their own businesses or rep for major dealers. Cammy Harris, an apparel buyer for Matis, went on to design clothing for Sierra Designs; Steve Sullivan, an FLC grad and long-time employee who learned to sew in the basement, repairing goods for customers, went on to start Cloudveil and now owns the Jackson-Hole-based brand Stio; and Dakan, who started back in 1998, now owns Pine Needle with his wife, Ashley.

“I’m very proud that we had an employee that’s an owner now,” Schroeder said. “It’s so great!”

Although gear has changed significantly over the years – everything’s lighter, more durable and has a lifetime warranty – some things have stayed the same.

And it remains true that high fashion doesn’t do especially well in Durango, nor do white-soled shoes and white pants.

But otherwise, Dakan said, just about everything else has changed: materials, styles, gear and culture. The days of few companies and few choices are gone. Now, it’s a challenge just to keep up.

“When I started, Pine Needle had Scarpa, Backcountry (Experience) had Crispi, and Gardenswartz had Garmont, and that was it for tele boots,” Dakan said. “Now you’ve got who knows how many vendors selling AT boots.”

By all accounts, it isn’t coincidence that Patagonia has one of the more supportive models for working with retailers and that they’re Pine Needle’s No. 1 vendor.

“Brick-and-mortar retailers play a crucial role in testing and promoting products, offering expertise, educating consumers and cultivating outdoor communities,” Dakan said, noting that Pine Needle continues to sponsor the Langlaufs Nordic race and the Durango Nordic team (along with other youth activities); support avalanche safety through scholarships and training; and is bringing back Snowdown events like the Hillcrest fun relay and launching the Chapman Challenge, an official Snowdown rando event.

So while yes, it’s true that most everything may be different from when Matis returned to Durango to open Pine Needle some 40 years ago, some key things have stayed the same: wool’s come full circle; people in the industry still seem to stay in the industry; Durango still likes to start ’em young; and brick and mortar still offers the seasoned expertise, cultivated products and home-town appeal that the internet just can’t compete with.

In fact, the headline of the story about Pine Needle in the 1984 issue of Outdoor Retailer is just as relevant today as it was back then: “Pine Needle Mountaineering: Carving a Special Niche in the Southwest.” 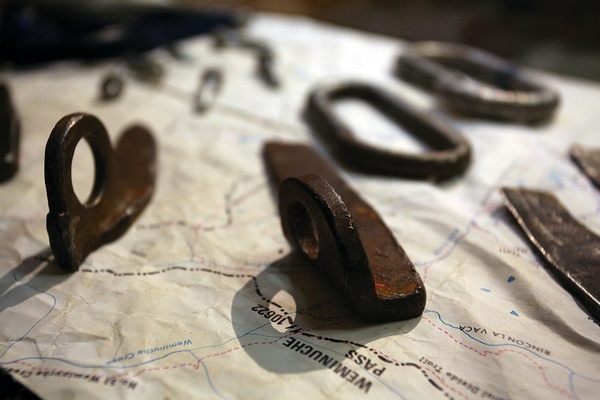 Chouinard pitons are among the many mountaineering relics sold by Pine Needle Mountaineering in the 1970s that now grace the store's walls. Also "on display" in a remote corner of the store is a sheet of steel used by the late Bill Forrest to cut ice axe picks. Forrest, who once lived in Durango, was a Colorado climbing legend and innovator in the company of Yvonne Chouinard as an early manufacturer of climbing gear in the U.S./ Photo by Steve Eginoire