Outside – and inside – the box
Dennis Elkins to hold benefit performances of "box." at the DAC 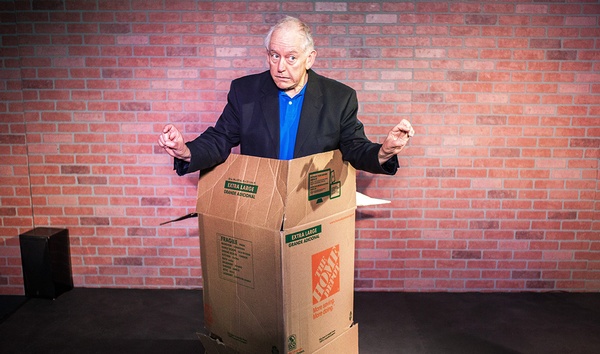 Elkins in a scene from his new one-man play, inspired by his son's death./Photo by Zachary Burke

The whole idea behind “box.” – said as “box period” and coming to Durango for two benefit performances this Sat., June 1 – came to actor and playwright Dennis Elkins 11 years ago, when the ashes of his son were delivered to the door in a cardboard box.

“I was absolutely struck dumb,” Elkins said. “I thought they came in urns or something fancy. Something fancier than just a cardboard box. And then I had to pack up all of his things in his room, again, into other cardboard boxes. This idea struck me that, oh my god, is this the end of our lives, just packed away in a box?”

Elkins turned his grief and ongoing processing of his son’s death in part toward creating the one-man show that became “box.,” which he worked on for about a decade (including a turn in Durango as the  chair of the Fort Lewis College Theater Department). It grew beyond that one life-defining event to incorporate all kinds of other experiences of life and lives going into boxes, from packing up his parents’ home after they passed to his own countless moves around the country.

Now, the production is a collection of stories from Elkins’ life, all coming back to how the humble cardboard box became so important and defining.

“We pack things away in it, we store them away under the bed or we put them in the closet or in the attic, and yet, when we decide to move, which I’ve done several times, we still take the box with us, and we can’t seem to get rid of it,” Elkins explained. “The stories that I’m trying to unpack, you might say, are: why do we get so fascinated with packing away things and then holding onto them, and how do we let them go?”

As he developed “box.” with his director and collaborator, Karla Knudsen, Elkins envisioned his character being surrounded by a warehouse of boxes on stage. But creativity often springs from limitations and restrictions. So, Knudsen told him he had only one box.

Otherwise, the stage is empty, ready to be filled with the audience’s own interpretations and reactions to Elkins’ experiences.

Elkins recounted how he had to hold auditions for the box. It had to be large enough for him to get into – and get back out of. He learned it had to be square, so that it could fold easily on stage – during one performance in South Africa, he could only find a rectangular box, which led to some wardrobe malfunctions and extra creases on the box’s behalf.

Then, he had to tap into his childhood imagination in order to interact with the box. Knudsen directed him to just play with the box. Elkins remembered how a box could be anything for him when he was a child, so he began driving his new box car around the stage, like he hadn’t done in years. That moment made it into the final production, its innocence something that just about everyone in the audience can relate to.

And boy, do audiences relate to Elkins’ show. Both performances in Durango will have time for a talkback after the show, where audience members can share their responses and reactions with the actor and playwright.

“I’ve found as I’ve performed it in different locations, that people have actually wanted to participate not by just watching and experiencing it voyeuristically, in a sense, but when the show is done, so many people want to express their own experiences of the points I touch on in my life,” Elkins said. “This is going deeper than I thought it was going to. This is speaking to more people on more levels than I ever dreamed.”

For all that the show digs into grief and loss, it’s not without an expansive range of emotions. While the piece started in the devastation surrounding the worst moments of Elkins’ life, he finds something dark and humorous about all the things we keep in boxes and why we keep them. He says that our obsessions are funny to the point of absurdity, and the show finds humor in our foibles. There’s moments of poignancy, he finds, and moments of heartbreak that he has  to get through every time he performs.

Each performance is somewhat distinct, as well. Being a one-man show, “box.” is easier to adapt on the fly than a full-cast production. Elkins has moments where, even though he wrote the show, he realizes mid-delivery how to say a line more clearly, or how to emphasize something differently. With such personal matters, too, he sometimes has audience members who react mid-scene, and he strives to adapt to those moments. He acknowledges that the play is a continually living organism – much in the same way grief is for many people.

His art has been there to help him with his grief, which is a big part of why Elkins is bringing the show to town in order to benefit both the Durango Friends of the Arts and the Grief Center of Southwest Colorado. One hundred percent of ticket proceeds will be split between the two organizations.

“I feel strongly about the work that both of these organizations do for Durango and all of Southwest Colorado,” Elkins said. “That’s why I’m doing it. I want to contribute in this way.”

These benefit performances came together because, fortuitously enough, representatives from both the Grief Center and Friends of the Arts attended one of Elkins’ performances last year. They came to him, immediately and separately, to ask if he would consider staging “box.” as a benefit in Durango. It spoke to both of them artistically, he said, and they both recognized the need to share such stories with individuals who have experienced loss at various levels.

Furthermore, bringing the show to Durango is a homecoming of sorts for Elkins.

“I only spent like five years of my life living and working in Durango, but five years is still a significant amount of time. You grow to love a community,” he said. “This opportunity was like, hey, this really is a nice idea for me to do something personally for friends, to say thank you for being so supportive while I was there.” 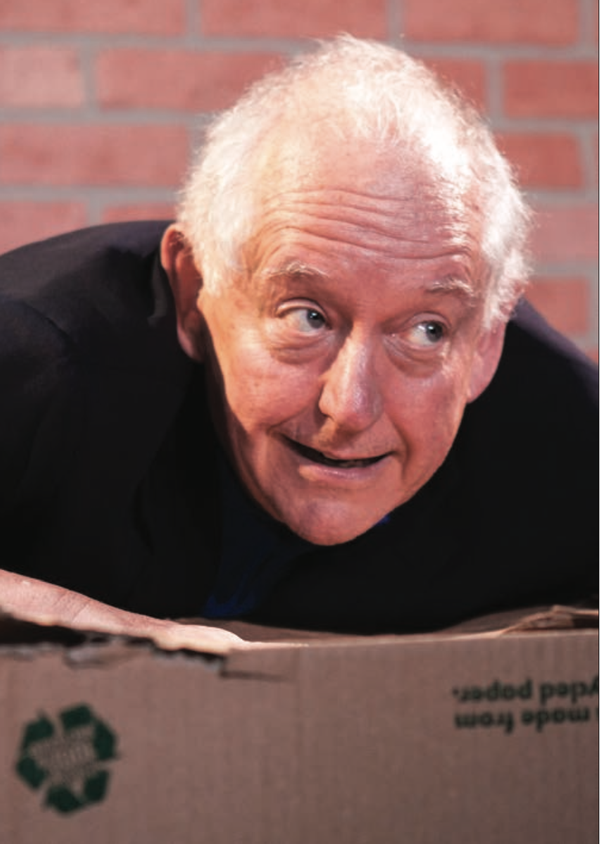 For all that Elkins' new show "box." digs into grief and loss, it's not without a range of emotions. While the piece started in the worst moments of his life, Elkins finds something humorous about all the things kept in boxes./Photos by Zachary Burke

What: “box.” A one man play by Dennis Elkins
When: 2:30 & 7:30 p.m., Sat., June 1
Where: Durango Arts Center
Tickets: $35 available at durangoarts.org. All proceeds benefit Durango Friends of the Arts and the Grief Center of Southwest Colorado
More info: boxperiodproductions.com