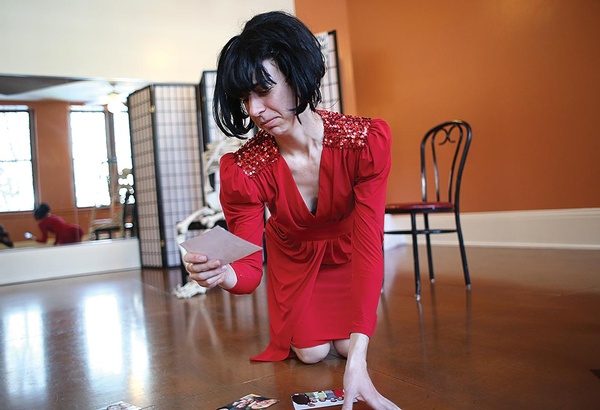 Professional dancer Malinda LaVelle left San Francisco almost two years ago and pirouetted into Durango with a goal to dance and choreograph somewhere other than a big city. Having grown up in Colorado, LaVelle found it easy to choose Durango because of its surroundings and proximity to nature. But once here, she soon realized there were other attributes that made the area special.

“Durango and the Southwest revealed some amazingly generous and inspiring artists,” said LaVelle. “I now truly believe that dance is not dependent on having ideal resources; it’s resourcing what’s in front of you to do the work you want to do.”

It is a win-win for everyone having the highly acclaimed dancer and choreographer in our midst. She will be unveiling her latest work (and first in Durango), “Cover Girl,” at Fort Lewis College on Feb. 17-18.

LaVelle’s one-woman piece was fashioned in conjunction with the company she helped found in San Francisco, Project Thrust. She described the show as a “non-linear organization of action” including movement, dialogue and props.

“Cover Girl” was directed and choreographed by LaVelle specifically for Emmaly Wiederholt, a Project Thrust co-founder who also used to live in San Francisco but recently returned to her home state of New Mexico. According to LaVelle, the piece is about “declarations of fraud, dreams of gratification, and the facades people put on for themselves and for others.”

“Every piece Project Thrust has created is an extension of each dancer’s own personality and life experience,” she said.

In March of 2016, Wiederholt and LaVelle created “Cover Girl” during a weeklong residency at The Pen?asco Theater in Pen?asco, N.M., south of Taos. The concept was based on what LaVelle describes as a long distance collaboration between 10 dancers from around the world; all of whom have been previously involved with Project Thrust.

Whereas some works can take as long as a year to create, the energy and excitement between Wiederholt and LaVelle enabled them to complete “Cover Girl” in one week of intense work.

It is also the first solo piece produced by Project Thrust, and Wiederholt is more than up to the task. She gives a magnum opus performance in which her dancing is almost overshadowed by her acting ability. Her facial expressions and humorous, poignant and frenetic monologue is completely captivating. Many in the audience will likely see a bit of themselves, or someone they know, in the character.

Three years ago, following an illustrious career in San Francisco, Wiederholt returned to the “Land of Enchantment,” where she has since danced at Santa Fe’s Rail Yard Performance Center as well as the Santa Fe Community Gallery as part of the Strangers’ Collective. She is also a writer, founder and editor for “Stance on Dance,” a web-based publication, and the author of a soon-to-be-released book, Beauty is Experience: Dancing 50 and Beyond.

LaVelle recently appeared in Durango with the 20 Moons Dance Co. in Merely Players’ production of “A Christmas Carol.” An award-winning dancer in her own right, she is the recipient of two Isadora Duncan prizes, which are given annually in celebration of the “Richness, diversity and excellence” in San Francisco Bay Area dance. In addition, she teaches a movement class at the Southwest Safehouse, is a faculty member at Ballet Durango, and performed in the Durango Art Center’s 10-Minute play festival last year.

“Cover Girl” is comprised of four vignettes, each starting with the assertion, “This is me!” and then adding complexity while the storyline progresses. As the sole unnamed character, Wiederholt’s identity becomes muddled

and more and more outrageous in her assertions, dress and demeanor.

Proclaiming, “I’m going to make them love me!” and “I knew they’d call me,” the protagonist works at convincing herself through positive thinking. Many people who have auditioned for a part or interviewed for a job will recognize the mental gymnastics of self-delusion, deprecation, doubt and denial. As each scene unfolds the young woman states, “I know exactly what I’m doing,” and journeys through hopefulness and wishful thinking into denial, acceptance and ultimately a confessional.

Along the way she announces, “I am a professional, creative, energetic, organized team player!” The assertion also happens to characterize Weiderholt’s superb performance.

Costume changes, a skeleton (you have to see it) and a few props are the only accompanying elements Weider-holt has to work with. Most are metaphors, with the most obvious being a ladder that can take her to the “next level.” Music from Beethoven to Nat King Cole provides appropriate background to the otherwise sparse production. It is a physically demanding role, and Wiederholt, a delightful comedic actress as well as a nimble dancer, masters it. According to LaVelle, it is “an uproarious ride through the trials of personal defeat and the many ways to retell one’s own narrative.”

“Cover Girl” is an opportunity to experience theatrical entertainment at its best. The show runs 75 minutes with no intermission. Tickets are suggested $15 general admission, with a sliding scale of $10-$25. LaVelle asks that everyone choose the ticket price that best represents their ability to pay. If you plan to attend, be aware that seating is limited to only 50 per performance. Tickets can be bought online at projectthrust.brownpapertickets.com. or at the door (cash or check only. 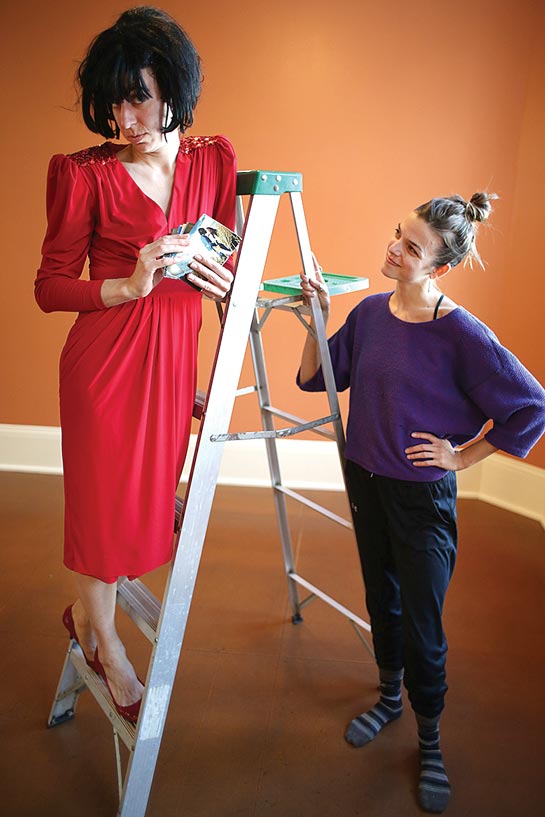 Wiederholt and director Malinda LaVelle. The two are co-founders of Project Thrust dance company, which began in the Bay Area. Both women recently migrated back to the Southwest./Photo by Jennaye Derge