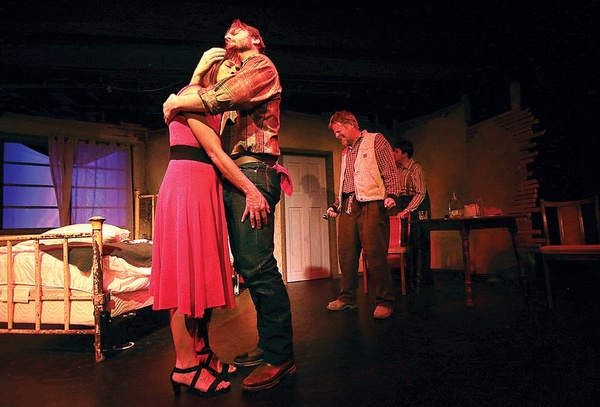 Joy Kilpatrick, left, as May, and Jason Lythgoe, right, as Eddie, in a scene from the Durango Arts Center's "Fool for Love." Directed by Theresa Carson, the one-act play was written by actor Sam Shepard 30 years ago after a breakup with his wife./Photo by Jennaye Derge

“We’ll always be connected, May.”
– Eddie in Fool for Love

Sam Shepard’s “Fool for Love” was first performed 33 years ago, featuring Kathy Baker and Ed Harris. As a Pulitzer Prize finalist for drama, it gained stature which still holds up today.

Local audiences can see what makes this story so enduring as the play resumes its run on the Durango Arts Center’s Diane Panelli Stage on Sept. 7. The one-act play, which opened Aug. 26, unfolds in a shabby, dilapidated motel room remarkably recreated by set designer Eric Bulrice. The demoralizing environment is an apt metaphor for the hell-bent lives of the antagonistic Eddie and May.

Those who know Shepard’s plays have come to expect intensity and biting commentary about relationships; the DAC production is no different. Directed by Theresa Carson, the action focuses on lovers May, portrayed by Joy Kilpatrick, and Eddie, as performed by Jason Lythgoe, who remain bound together by a gut-wrenching, all-consuming secret. As described by Carson, “The lovers oscillate between intimacy and alienation while fighting for each other, their own identities, and a way to understand their world.”

Shepard cathartically penned the script following his divorce from O-Lan Jones at the early stage of his very public relationship with actress Jessica Lange. He initially described the play as “The outcome of all this tumultuous feeling I’ve been going through this past year. It’s a very emotional play and in some ways embarrassing for me to witness, but somehow necessary at the same time.”

There are just four actors in the play, and the intuitive Carson was fortunate to find and cast performers with extraordinary talent. Joy takes on the demanding role of May, her first time on stage since giving birth to her daughter nine years ago. Following an extensive theatrical education, Kilpatrick worked professionally on stage, television and film. She played opposite Patrick Stewart in the film “Safe House,” has performed the role of Mrs. Kendall in a stage adaption of “The Elephant Man” and won critical acclaim in south Florida for her role in “The Mystery of Edwin Drood.”

Being familiar with the play before auditioning, Kilpatrick said she was thrilled to be given the chance to play one of the leads in Shepard’s play. “As an actress, I have always been drawn to characters that are complex,” she explained. “May is no exception. Her choices and motivations require me to be more open and vulnerable as an actress. May is giving me a gift.”

Lythgoe, a multi-talented and seasoned actor, is currently the DAC Youth Theatre Program Director for APPLAUSE! He plays Eddie, a rodeo cowboy and May’s adversarial lover. His passion for the part reflects that of his co-star’s. “When I found out that the DAC was doing this show, I jumped at the chance to audition. I rarely get to bring out my dark side,” he admitted. “It’s fun playing the bad guy; not to say that Eddie is a villain, per se, it’s just that he isn’t your stereotypical leading male character. He’s a liar, a cheat, a manipulator, and as the script says, a fantasist.”

Both he and co-star Kilpatrick put forth physically demanding and emotionally intense performances for the two unsympathetic characters, which might make audience members a tad uncomfortable. Indeed, their libidos are often in conflict with a desire to escape from each other’s clutches, making their dialogue tediously redundant.

Geoff Johnson, who portrays Martin, the foil between the two lovers, literally bursts onto the stage mid-way through the story. At the juncture of his entry, the back-story of May and Eddie’s peculiar love affair begins to unravel. A familiar presence on the Durango stage, Johnson has been seen many times including in the “Rocky Horror Show,” “Guitar Strings, A Cowboy and a Lost Peacock,” “Addams Family” (as Gomez) and most recently in “Shrek” as Lord Farquaad. This will be his third play sharing a stage with Lythgoe.

Johnson remarked that Martin is different from any role he’s ever played. “He is a real person thrust into a very unusual situation,” he said. “There was no obvious way to approach the character. This character needed to be real and believable. There are several layers to Martin, several motivations all playing out at once.

Former Karate instructor Jot Stephens moved in 2014 to Durango from Honesdale, Penn., where he was also the director of “The Great Train Robbery,” the town’s main tourist attraction. Locally, he has done stand-up comedy at The Irish Embassy Pub, has played the Professor on the Dinosaur Train, and recently took home a trophy for his float in the Steampunk Snowdown Parade. His spot-on performance as “The Old Man” is a pivotal one and ultimately provides the rationale behind Eddie and May’s conundrum.

Casting can be the most daunting part of producing a play, and for Carson, “Fool for Love” was no exception. Admitting its difficulty, she was elated with the result. “There are many very adult themes in this play and it takes some brave actors – and I got them! It is very meaty and takes a lot of digging to get at the deepest core of these characters. And my actors have risen to the challenge.”

What: “Fool for Love,” a one-act play written by Sam Shepard

FYI: Running time is approx. 1 hour and 20 minutes with no intermission. For mature audiences