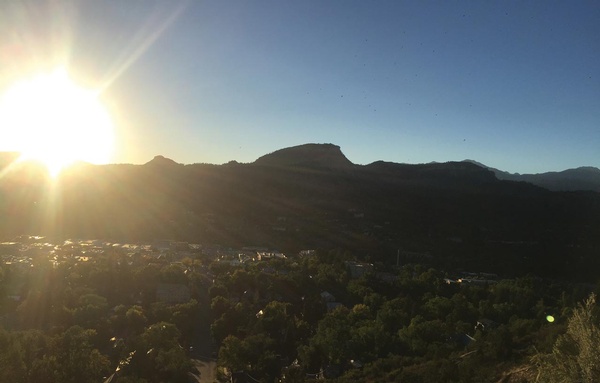 Like your mamma says, if you’ve got it, flaunt it. Well, we’ve got sun, famously touting 300 days of it a year. And with the 5-billion-year-old star projected to last another 5 billion years, it’s easy to call ole Helios (or Sol, if you’re more into the Roman thing) a renewable source of energy – no matter what Donald Smogman says.

So if you want to help ease the burden on Mother Nature and (eventually) save money (after spending a lot of money), join 884 other locals, install some solar panels and start generating energy for Southwest Colorado. With costs at an all-time low and technology in its prime, that number is only expected to, like the sun, keep rising.

“I wanted to demonstrate that anyone can do this,” single-mother Kristina Munroe says of her adventure building an off-the-grid home. “A lot of people who think they can’t really can.”

An engineer by trade, Durango-bred Munroe worked on “Mac-mansions” in Seattle for 20 years but “felt there needed to be another way” to manufacture spaces.

“We’re just massively using up the Earth’s resources for a few people in large homes,” says Munroe. “But even modest homes often neglect the powerful energy of the Sun.”

In 2010, the single mom of two moved back to Southwest Colorado with a mission to build from the ground up a place that exemplified her passion for reducing her impact on the Earth. With the moral support and savvy of builder Mike Muir, Munroe designed and engineered Twisted Oak, her sustainable home west of town.

During the 18 months of construction, Munroe set up a picnic table on the site and tutored her 9-year-old and 11-year-old sons in reading, writing and ‘rithmetic, but these young bucks also got a lesson in how to build a house – next-level “home-schooling,” if you will.

“It seemed like a really cool school project,” says Munroe. “Most kids, most people, don’t have a clue how their house is put together.”

The result is a comfortable, 1,400-square foot “earthship” that features many resource efficiencies, including solar-powered heat and electricity.

“The lifestyle isn’t the spinning wheel by the fire,” says Munroe. “We have all of the conveniences of a modern home. But if we’re without sun for five days, I’m starting to conserve – that is, the boys can’t watch TV and have to open a book. And if it’s pouring down rain, I don’t do laundry. We just have to wait for a sunny day. You kind of adjust what you need to do. Sustainable, off-grid living gets you back in rhythm with the seasons and cycles.”

While she doesn’t know how many others thrive, Munroe knows she’s not alone in off-grid living in La Plata County, where the number of off-grid homes is currently unknown, because, well, that’s the idea.

However, this Sat., Oct. 8, Munroe’s abode and 10 other solar-powered spaces in and around Durango were featured in the Solar Home Tour presented by the Four Corners Office of Resource Efficiency (4CORE). Unlike Munroe’s, the other locales are all members of LPEA, contributing their solar-generated energy to the grid and enjoying a small – if at all – utility bill.

It was after touring solar-charged homes in 2013 that Bonnie and Jeff Rozean took the leap to solarize their lives. The Rozeans and 100 other families took advantage of Solarize La Plata, a grassroots campaign led by 4CORE. The six-month program aimed to increase the number of solar installations in La Plata County by offering up to 40-percent discounts on installations.

“We just went for it,” Jeff Rozean says. “It makes sense, and it feels better.”

Besides installing solar, Rozean also took steps to make his home in Three Springs an Energy Star 3 home. And then he purchased an electric car.

“It should pay for itself within eight to 10 years,” Ken Morrow, another benefactor of Solarize La Plata, says.

The initial outlay for Morrow’s solar system cost $25,000 for his 120-year-old home, but after factoring in the $2,000 LPEA credit for entering into  a long-term contract with them and the Federal Clean Energy solar credits, the cost came to $16,000.

“But it’s not a slam dunk with the utility company,” Morrow adds, explaining that an additional, unexpected $5,000 fee popped up for a new transformer, but LPEA later agreed to install his secondary line upgrade at no cost. He cautions that before going solar, have LPEA investigate to ensure there are no surprises for extra power lines, transformers or rotary girders. Overall, Morrow is “totally sold on solar.”

“Besides, wind energy has drawbacks with killing birds,” says Morrow, a retired veterinarian and previous owner of Durango Animal Hospital.

“We’ve done wind systems and a couple of hydro, but solar’s low-impact on the environment usually wins out over any other options,” Ben Jason, of local solar installer Living Solar, says. “And as long as LPEA keeps raising the cost of electricity, the economics will only get better and better every year.”

“It’s only been in the last few years that, thanks to more widespread incentives and economies of scale, solar has come far enough down in price to become competitive with conventional energy,” says Brendan Trimboli, of CalCom Solar.

“There’s no reason to wait till the technology gets better or cheaper,” says Jason of Living Solar. “The panels are warrantied for 25 years. You can put it on your house now and see a return on investment in the 12 to 15 percent range in seven to eight years – so long as the sun keeps shining.”

“The return I’ve seen already is the house is not drafty,” software engineer Jim Hoffman, who installed solar panels in 2009, says. “It was a long-term investment, like, free money in my retirement account. My total utility bill is, like, *$250 a year ... in Durango.”

(*It’s actually $276, for those of you sticklers out there. LPEA charges $23 a month for infrastructure costs.)

While they wait to see their wallets benefit from switching to solar, practicing converts will tell you that the return on investment is instant peace of mind that you’re doing something good for the planet.

A year after the installation, Hoffman took part in an energy audit that determined where and how much air was leaking from his abode on Peaceful Drive. His home measured the lowest seepage of any house in the country, deemed “the tightest house in 2010,” according to the Home Energy Rating System (HERS).

Making sure your home is energy-efficient before installing solar is critical to getting the most bang for your buck, he says. A home assessment can pinpoint areas that should be weatherized before taking the leap to solar.

And, even after you’ve checked all of these boxes, make smart choices.

“If you want to be successful in a net-zero fashion, you’ve got to do all that stuff that your mom told you to do, but you’ve got to do it for real,” says Hoffman. “Like, close the door and windows. And you can’t have energy-hog appliances like plasma TVs. You have to pay attention to the details.”

Speaking of details, how do these shiny, blue solar panels work anyway? It's a little something called photovoltaic (PV) energy, and it goes like this:

"PV energy makes electricity by passing light through silicon wafers, called solar cells," explains Marc Bourdon of CalCom Solar. "The solar cells have a positive layer and a negative layer, which together create an electric field, like in a battery. When sunlight passes through a solar cell, it knocks electrons loose from their atoms. If conductors are attached to the positive and negative sides of a cell, it forms an electrical circuit. When electrons flow through such a circuit, they generate electricity."

For those of you whose circuit boards just went haywire, he means:

"It's like the sunlight is Indiana Jones and the electrons are all the kids he freed from the Temple of Doom," says Bourdon. "Those newly-liberated kids went on to be some pretty slick energy."

Going solar doesn’t transform you from Donald Smogman to Bernie Treelover, though.

“Remember kids, we can’t have anything in this world without taking it from something else,” explains Bourdon. “Yes, the materials to make solar panels have to be extracted from the ground, and yes, they have to be assembled in big factories in China, and yes, they come on diesel freighters over the Pacific, but they also supply clean, mostly predictable, and long-lasting energy once they get here.”

They’re just not made out of a never-ending supply of Spielberg movie magic. 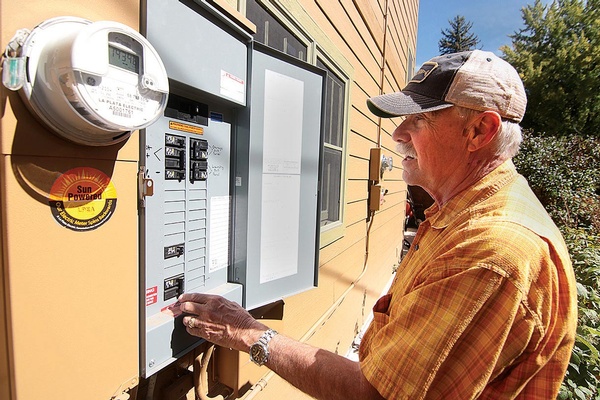 Ken Morrow discusses the solar meter on his home Tuesday afternoon. Morrow installed the system with help from 4CORE's "Solarize La Plata" program, which gave residents discounts on installations. His downtown house will be part of 4CORE's Solar Homes Tour this Saturday./Photo by Jennaye Derge

What: "Powering Forward: What Everyone Should Know About America’s Energy Revolution," a presentation by former Colorado Gov. Bill Ritter

Where: The Powerhouse Science Center