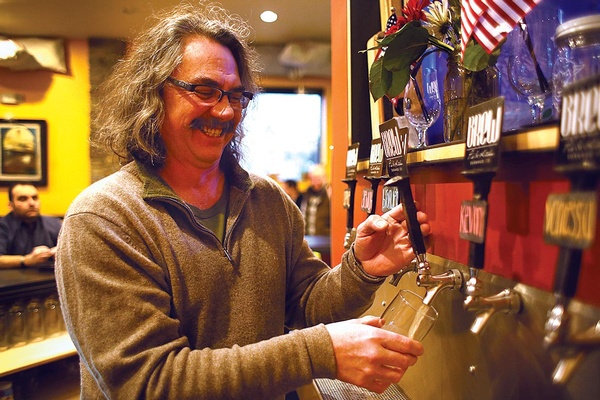 BREW Pub & Kitchen owner Erik Maxson pours a taster of the Navigation Fail Ale. The beer comes from a recipe from local Careflight nurse Dan Bergman, who came up with the idea to sell pints to benefit La Plata County Search and Rescue./Photo by Jennaye Derge

The Search and Rescue text came through on a morning in June 2015. A 12-year-old girl was missing somewhere along the ridges and gullies below North Twilight Peak. During a backpacking trip led by a Telluride-based middle school, “Chloe” left camp to use the facili-trees around sunset. She didn’t come back that night, and the next day was well on its way with no sign of the lost tween.

Searchers were instructed to meet in the parking lot above Andrews Lake. A Careflight helicopter landed just after I arrived, the thrumming chop-chop-chop whipping the summer solstice air into cool currents. I grabbed my pack filled with the gear La Plata County SAR trainings have encouraged us volunteers to bring on missions: first aid kit, water, extra layers, girl scout stuff.

The SAR coordinator shouted for me to wait for the uniformed lady to direct me toward the helicopter. When the motion came, I moved, clambering into a seat on the whirlybird.

I fumbled with the buckles and belts we’d been shown how to use in a recent training and ultimately had to let the uniformed lady cinch me in. I managed the headset on my own, situated my pack on my lap, and then the machine my dad hates most began its wonky ascent. As ponderosas became matchsticks, my eyes scanned the pine-choked slopes for any sign of a little girl.

Three minutes later, we landed on a marshy saddle above Crater Lake. I (independently) unbuckled myself and jumped into the mud, following SAR members down to the scene. A group of 20 or so volunteers was already there, including folks from neighboring San Juan County SAR.
We were briefed on Chloe’s backcountry experience and listened to speculations about where she might have wandered. The group had camped at nearly 12,000 feet, and nighttime lows had dipped into the 30s. Chloe was only wearing red pajamas and a “funny” hat when last seen at camp. How far could she have possibly gone? I couldn’t help but think of mountain lions.

After leaders devised a plan, my search partner and I fanned out 100 feet from each other, tracking a drainage heading toward Lime Creek. As we trekked along yelling “CHLOE!” I tried to wrangle my imagination, dreading to see her little hat tangled in logs across the creek – or worse.

For two hours, we roamed with a purpose. And then a joyous shout from a nearby search party called out that Chloe had been found, cold but safe, just beyond Crater Lake. Turns out she’d wanted to see the sunset from the ridge and couldn’t find her way back to camp. So she hunkered down for the night. By the time we regrouped, Chloe had been scooped into the helicopter and flown home to her family.
Smart girl, that brave Chloe, staying put when she realized she was lost. Kids seem to know better than adults that, when navigation fail happens, moving isn’t always the best option. Especially in the unforgiving San Juan Mountains.

With both population and tourism on the rise in Colorado, SAR teams across the state have seen an uptick in missions in the last couple of years. In 2014, there were 1,250 rescues, while in 2015, there were 1,655. La Plata County SAR, which services all 1,700 square miles of the county and also provides aid to surrounding counties, averages between 40 and 50 missions a year.

In Colorado, sheriff’s departments get stuck with the bill for whatever costs are incurred during a mission – costs that creep quickly into the thousands of dollars: gas for vehicles; hardware and gear; and costliest of all, helicopter rental, which costs between $1,400 and $2,400 per hour.

One way Colorado assists county sheriff’s and SAR teams is through fees extracted from hunting licenses and the Colorado Outdoor Recreation Search and Rescue (CORSAR) card. Created in 1987, CORSAR cards should be purchased by anyone who spends time in the great outdoors. Keep it in your avi pack, saddle pack or fanny pack. They’re not insurance, nor do they cover medical costs; they simply guarantee that your rescuers will be reimbursed for costs incurred while saving you. Any money left-over in the CORSAR coffers at the end of each year is distributed to SAR teams across the state.

While helpful, this left-over money isn’t enough to cover costs associated with running a viable SAR unit, even with the tireless support of an all-volunteer squad. In 2016, LPCSAR rolled deep with 90 active members, who contributed a combined 5,603 volunteer hours. Volunteers serve on specialized teams spanning from communications and IT to ropes rigging, canine search, swift water rescue, and mobilization using horses, snowmobiles, and even mountain bikes.

These teams have been “interfering with natural selection since 1981,” and their missions are hardly ever textbook, ranging from finding missing juveniles to avalanche rescues, plane crash responses, ice climbing incidents, and aiding hikers suffering from altitude sickness.

Their knowledge, trainings and equipment are paramount for success, but none of these necessities come freely. In 2016, the La Plata County Sheriff opted to reimburse LPCSAR up to $10,000 for training events. This boost is much appreciated, says Tom Brueckner, training coordinator and vice president for LPCSAR, but community support and fundraisers are also vital to SAR’s livelihood.

This year, thanks to the brilliant idea of a couple helicopter flight nurses, LPCSAR won’t have to rely solely on the piping hot cakes to fund their epics. Rather, Durango’s other favorite carbohydrate – beer – will come to the rescue.

“Let’s just say it’s not the typical spaghetti dinner,” Dan Bergman, a local flight nurse, said. During his three years of service in the area, he has collaborated on numerous missions with LPCSAR.

In May 2015, Bergman and his trusty flight medic, Ben Stone, decided a beer-centric fundraiser would be the perfect bait to entice Durango’s hop-happy folk to support LPCSAR. While Bergman got busy crafting a worthy BREW, Stone contacted Erik Maxson, owner of BREW Pub & Kitchen, to see if he’d be interested in upscaling the quantity of beer and hosting an unforgettable fundraising event.

“Anytime that I, as a brewer, can contribute in a positive way to the community and not be in the spotlight for all the things that can happen from overindulgence, I’m all about it,” says Maxson. “I’m psyched to make Durango a better place. Hopefully, we can do that one pint at a time.”

So Bergman brought the recipe to BREW, and he and Maxson got to work. Mean while, Brueckner sent out a list of potential beer names for SAR members to vote on. The winner by a long-shot was the apropos Navigation Fail Ale.

This yarrow-infused IPA will be along the lines of a double IPA or imperial IPA, says Bergman, featuring citrus notes and a big, malty profile. The yarrow also adds a local flair to the bold beer, giving it a floral aroma and sweet, smooth finish.

“We wanted to put in an ingredient that would bring you back to the mountains, back to SAR, and back to Durango,” says Bergman, who’s been BREWing since 2003.

The Navigation Fail Ale is expected to settle in at 7- to 7.5 percent-ABV (alcohol by volume), says Maxson. In other words, it’ll pack a punch but should still be approachable.

“It just didn’t seem right to throw a 9 percent beer to people who are trying to be responsible,” says Maxson.

Folks are invited to partake in the first public sampling of the ale at 6 p.m., Thurs., Jan. 26, at BREW (117 W. College Drive). Stone and his wife, Carrie, purchased 400 pint glasses and solicited the graphic design

talents of SAR volunteer Bettina Mills to fashion a snazzy label. For $8, get a limited-edition pint glass full of the limited-edition ale (all but $1 of Navigation Fail sales will go to LPCSAR). Food and other BREW BREWs will also be available for purchase, with a portion of the proceeds going to LPCSAR.

“We’re very appreciative of how the community comes together with regular citizens, like Dan, Ben, Carrie, and Erik,” says Brueckner. “We really can use every dollar.”

Bergman says this is his way of giving back to the community. “It’ll be great to put a face to La Plata County SAR members and have a pint glass sitting in the cabinet that reminds people there are guys out there putting it on the line,” he says.

Because every time we make questionable decisions in the outdoors, our mistakes put others at risk.

“This community is going to play hard,” says Stone. “You need the SAR team to be there for you. On the other hand, SAR needs its community to bone up from time to time. There’s a quid pro quo necessary to keep Durango thriving as the outdoor Mecca that it’s become for so many of us.”

And nothing goes better with the great outdoors than a nice, cold BREW.

“Why wouldn’t you want to support the people who find the people that can’t come back on their own?” laughs Maxson. “They’re an organization that benefits us all, regardless of our desire for them to be there or not. I mean, I just want to be found.”

CORSAR cards are sold online and at gear shops, state parks and even Walmart. A one-year CORSAR card costs $3, and a five-year card costs $12. If you don’t have a CORSAR card, SAR will still come to your rescue; the county just won’t get reimbursed for saving you. So you’re kind of being selfish by not purchasing one. Who doesn’t need a CORSAR card? Anyone already holding a current hunting or fishing license, or boat, snowmobile, or ATV registration is covered by CORSAR. 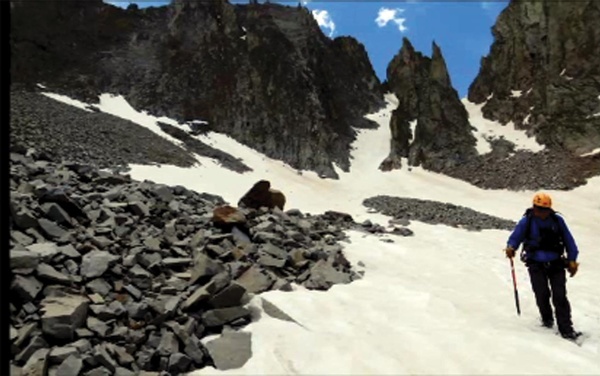 Search and rescue teams across the state have seen an uptick in missions in the past few years. There were 1,655 rescue statewide in 2015, 30 percent more than in 2014 La Plata County SAR, which serves 1,700 square miles, averages between 40 and 50 missions each year./Courtesy photo

What: Tapping of Navigation Fail Ale