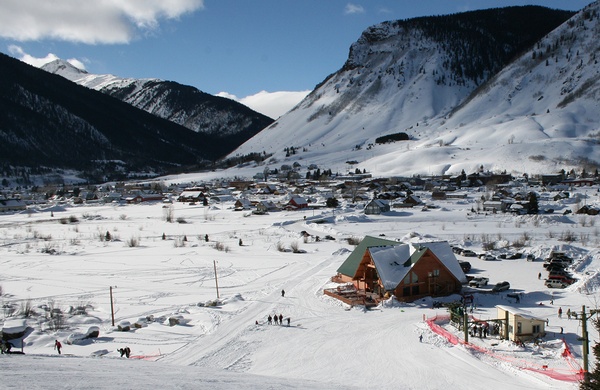 Kendall Mountain Ski Area in Silverton has long offered a low-key and idyllic setting for families and fledgling skiers. With the blessing of local residents, the town is pursuing a new master plan for the ski hill that would include expansion of skiing as well as the possibility of other options such as Nordic trails, biking and hiking trails, and a covered ice rink./Photo courtesy Town of Silverton

For decades, area grom-lettes have been cutting their shred teeth on the family-friendly environs of Silverton’s Kendall Mountain ski area. With ski-in, ski-out parking, a cozy, no-pressure lodge, mellow runs (technically four) and a leisurely two-seater, complete with classic rock emanating from the lift shack, it’s the perfect low-key training ground before graduating to the big-time resorts down – or up – the road.

But what if graduating didn’t necessarily mean leaving Kendall? What if it meant hopping a lift to treeline and ski some gladed runs or taking a long, meandering cruiser to the bottom? And what if there was a reliable ice rink, not at the mercy of Mother Nature’s whims, or a developed Nordic system for skate skiing and fat biking? Night skiing, music festivals, whitewater park and a full-scale cafeteria and bar?

At least that’s what a majority of Silverton residents said when they began envisioning options for their intown ski hill more than a year ago.

“There’s always been a widespread belief that Kendall is underutilized,” Lisa Branner, the Town of Silverton’s community relations director said.

Branner was hired by the town in 2017 to gather residents’ desires and see if an expansion was even feasible. Armed with a $25,000 grant from the Community

Affairs Department and matching funds from the town, Silverton hired SE Group consultants to explore possible expansion of the little ski hill that could.

And turns out, it can.

“When I opened the map, it kind of blew me away,” said Branner of SE Group’s viability study, which was finished in October. “The study asked, ‘Do we have what it takes?’ We did a terrain analysis on whether we have viable terrain that could be developed next to the ski area, and it turns out, we do.”

Other ideas explored in the plan include snowmaking, a magic carpet and relocating the ice rink and covering it.

In a series of visioning sessions held throughout 2017-18, the town received responses from 100 adults and 41 youth, including visitors and part-time residents. Ski area expansion was listed as the No. 1 priority, followed by an ice rink and more Nordic skiing options. In addition to these, the plan looked at snow-making as well as increasing summer options, including mountain bike and hiking trails, and festivals.

If all of this sounds a little grandiose for Kendall’s jeans-skiing, bota-toting vibe, fear not. Branner said residents’ overwhelming request with the expansion was to retain Kendall’s down-home, high-country funk.

“We want to keep it affordable, family-friendly and low-key, like a Monarch or Wolf Creek,” she said. “There are some other real gems that are small ski areas that have maintained their authenticity.”

In addition, the expansion does not include any real estate development. That means no condo cities, high-rises or slopeside McMansions.

“We envision using the downtown as the ‘ski village,’” she said. “It’s a shorter walk to town from Kendall than it is from parking to the skiing at most resorts.”

Branner also emphasized that all of these notions are still very preliminary, sort of like a wish list for Santa. “These are just scenarios we came up with. It is not a plan. It just allows us to have a discussion,” she said.

And now that the small study is done, it’s time for – you guessed it – an even bigger one.

“The next step is coming up with a master plan,” she said. “Will it include skiing? Yes, in some way, shape or form to be determined.”

The town applied for a GOCO grant last month to help with developing a Kendall master plan but won’t hear back on whether they won the funds or not until March. In the meantime, local residents have given it their blessing. At a public meeting Nov. 8, where Branner discussed the viability study, 63 people turned out (a veritable mob for off-season Silverton), most expressing support for the expansion. A follow-up survey on whether the town should further explore expanded year-round recreation at Kendall gathered 117 responses – 108 in favor, six “maybes” and three nos.

“It was an amazing response rate,” she said. “We got some great comments.”

Of course, as is often the case with such things, the devil is in the details. According to SE Group, which has done studies for Vail, Silverton Mountain and Purgatory, among others, Kendall will need 1,000 skiers a day over a 100 to 120-day season to be sustainable. Right now, on a good day, Kendall sees about 120 skiers.

But Branner points out that 1,000 skiers is not outside the realm of possibility for the town, which sees about that many visitors during a typical summer tourism day. However, lodging could prove difficult at first. As of now, the town’s winter room capacity is 400.

Other concerns raised on the survey’s comment section include avalanche mitigation, environmental impacts and infrastructure, such as roads, sewer and water. Others say the 800-acre plan is simply too lofty.

And, of course, there is the issue of cost. The full-scale expansion under the 800-acre scenario comes with a $25 million price tag. Branner said whether that is scaled back or how it will be funded remains to be seen. There will also need to be an exploration on how the ski hill will be run: as a municipal hill, such as Chapman or Steamboat’s Howelsen Hill, a private enterprise, or some sort of combo.

“There are a lot of question marks there, and funding will depend on what business model we want to pursue,” she said. “We have a lot of work to do as a community.”

And while a lot of questions may still be up for debate,  there is one thing most local residents agree on: Silverton needs to diversify its economy. Particularly after this summer, when fires shut down its lifeblood, the D&SNGRR, as well as surrounding public lands. Expanded skill hill offerings will not only bring in visitors and their dollars, but create jobs, improve the quality of life and maybe attract new residents, families and businesses.

“People are realizing we need to do something to diversify,” she said. “The idea is to balance out the summer and winter economies. This is one piece of that puzzle. It’s ambitious, no doubt.”

But unheard of? No. In fact, Branner said the idea of expanding skiing at Kendall is almost as old as the ski industry itself.

“Looking back through city and county records, this discussion has been going on since the 1950s, if not earlier,” she said. “There is so much potential there. It’s exciting. Maybe it’s an idea whose time has finally come.” 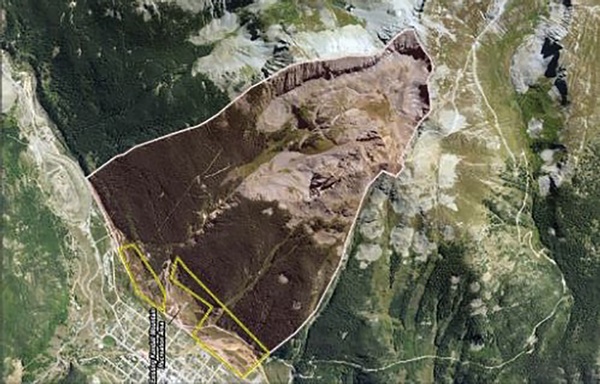 An aerial view (shaded in brown) of the area of Kendall Mountain proposed for expansion. The existing base area is in the lower left.

While Kendall Mountain considers its options for the future, some of you may be wondering, what about this season? Despite recent snowfall, Kendall Mountain is not quite ready to open for business, according to the town’s community relations manager Lisa Branner.

The ski hill was hoping to open Dec. 7, but it appears one more good dump of 8 to 10 inches is still needed.

However, the recent frigid overnight temperatures have allowed good progress to be made on the ice rink. “It is possible the rink may open earlier than in past years,” Facilities, Parks and Recreation Director Todd Bove told the Silverton Standard.

In addition, this winter Kendall will offer four nights of skiing under the lights from 5 – 9 p.m. Dec. 22, Jan. 19, Feb. 9 and March 23. There will also be food, beer and wine, a bonfire and a DJ to liven up the evening. Night tickets are $25 adults and $17 kids/seniors. Children 5 and under ski free. Day tickets, discount passes and season passes are not valid for night skiing.

Also new this season is “Ice Disco.” Kendall will be spinning ’70s disco tunes at the Kendall outdoor rink from 5 - 8 p.m. on Sat., Feb. 23. The event will include beer & wine, food, and, of course, a costume contest. The skating is free and open to the public.

Folks can get up-to-date information on opening day, grooming, snow conditions and the ice rink on the Kendall Mountain Facebook page or at skikendall.com.