Re-inventing the wheel
For locally made Myth Cycles, it's all about enjoying the ride 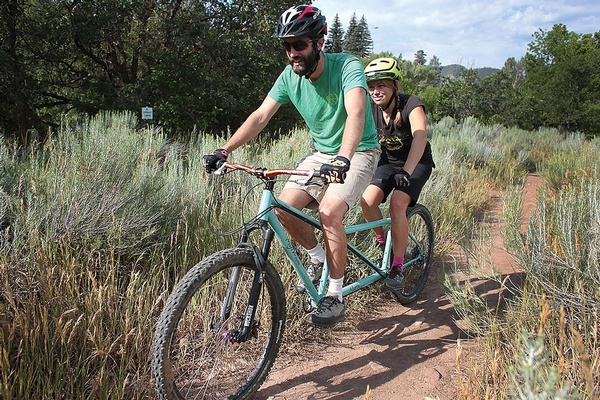 When I first met Eric Tomczak almost a decade ago, it was before he was the owner and operator of the new Durango-based bicycle company, Myth Cycles. But even back then, I could already tell he was ahead of the curve. He rode custom bikes and wore flannel button-ups previous to any hipster on Instagram, and he had dreams of mobile freedom eons before the birth of #vanlife. He had a bushy beard and scruffy hair long before most lumber sexuals had facial hair, and he liked to make things out of metal before steampunk was even steamy. He was kind and funny, and it made me – and everyone else – want to be his friend. That is, until one day he asked me if I wanted to go on a tandem bicycle ride with him. Suddenly, after years of friendship, we hit a snag.

My answer was an instant and firm “no.” Riding bicycles meant freedom and independence – why would anyone ride a bike if they had to be attached to some-one else? Going tandem just seemed silly, awkward and frustrating. So that was that – we never went on a tandem bike ride.

But Eric, who grew up in Durango, is not known for giving up. And he didn’t give up asking people to ride tandem with him until he asked his now wife, Hayley. Fortunately, she said yes.

The duo could be seen riding happily around town on their tandem cruiser. But their love of two-wheeled adventure didn’t stop there – they also shared a passion for mountain biking. So perhaps it was no surprise when an inventor and welder such as Eric found a way to combine the two with a custom-built tandem mountain bike.

“Hayley and I wanted to mountain bike tandem, but the exact bike that we wanted didn’t exist,” he recalled. “Most tandems are custom built, and the timing was right when I was like ‘You know what, what if I built one?’ And so I did.”

He built the tandem mountain bike, named Nessie, using the tools and knowledge he gained from his 14 years as a welder, six of those spent working for local bottle cage company, King Cage. There, he picked the brain of owner, fellow frame welder and all-around bike guru, Ron Andrews. Eventually, Eric was ready to remove the training wheels, and in 2015 he started making his own custom frames out of a well-supplied shop in Falls Creek. The small space is filled with machines, gadgets and tools that any handy man or woman would dream of; the perfect combo of man cave and inventor’s space. Some tools he built himself, including a frame jig, and others he collected over the years; everything organized neatly.

Eric’s bike building repertoire doesn’t stop at tandem bikes. He currently has a production-style mountain bike model, with one seat, which has enough clearance for 27.5 inch wheels or 29, and he has dreams of experimenting with fat bikes. He doesn’t know for sure, but perhaps a tandem fat bike could be in Myth Cycles’ near future.

“My heart and soul are in off-road and touring bikes, but I’m a custom frame builder, I’ll do anything – anything but full suspension,” Eric said. The bike’s frames, as his website puts it, are “carefully chosen to be as light as possible while still producing a bike you can ride the piss out of.”

What allows Myth Cycles’ bikes to be ridden rough and tough is the material they’re made out of.

“I build with steel, which is my favorite bike frame material and something that the bike industry has gone away from a little bit,” Eric said.

Steel rides very comfortably and absorbs bumps and vibrations better than most other materials, so it is often used for touring bicycles and can make a road bike a lot more comfortable. For a welder, steel is very versatile and gives the builder a plethora of lengths, profiles, weights and alloys, so it’s easy to build something unique and durable.

“You can build a frame you can have for the rest of your life,” Eric said.

Eric’s own steel frame (his go-to townie) has seen multiple bike tours including a two-month tour across the country and one from Durango to Denver. Since getting the bike after high school, it has taken him through corn fields, mountain passes, snow and rainstorms. It’s not rare for a special bond to form between rider and bike after being through so much together. According to Eric, bikes not only become a part of who a person is, but they can deliver a lifestyle that other mediums cannot.

“Bikes give people freedom, and that’s the goal: to get more people on bikes, to get people on something that they are super stoked to be on,” he said.

Myth Cycles’ mission is to get good quality, U.S.-made bicycles into the hands of anyone who is looking for a quality two-wheeled steed without having to sell their first born, second born and family dog.

“I always wanted a bike frame that was built in the USA, and I could never afford it,” Eric said. “I want to be able to bring that to more people.”

As a result of trying to get more butts in saddles, Eric offers stock frames (in small, medium and large; extra small and extra large upon request) for quicker ordering and availability. For those willing to wait, he takes special custom orders and is happy to sit down to coffee or a beer and work with anyone on new ideas. Or listen to their stories of adventure.

And that is precisely what Myth Cycles is about. Those larger-than-life stories, the myths if you will, that we tell friends about – whether it be an epic weekend ride, a commute gone awry or an afternoon spin on the trails. Some- thing shared with coworkers around the water cooler on Monday morning. “It’s the stories; our funny stories, sad stories, good stories, our bad stories,” he said. “Those stories are really important. Something valuable to me is the experiences we take away from things.”

And while you’re out inventing those stories, you may as well enjoy the ride.

For more on Myth Cycles, check out the web page at https://mythcycles.com/ 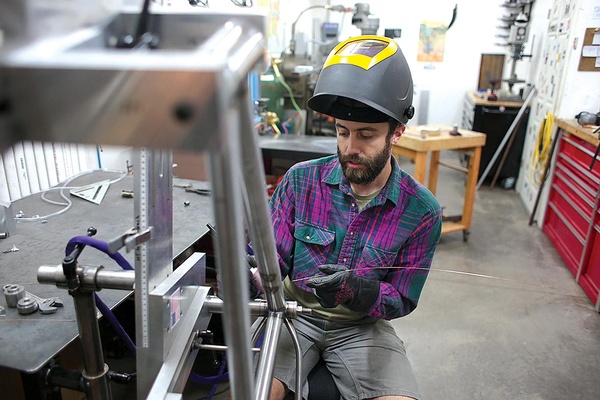 Eric Tomczak welds a frame in his shop. He works in steel for its longevity, versatility and absorption./Photo by Jennaye Derge