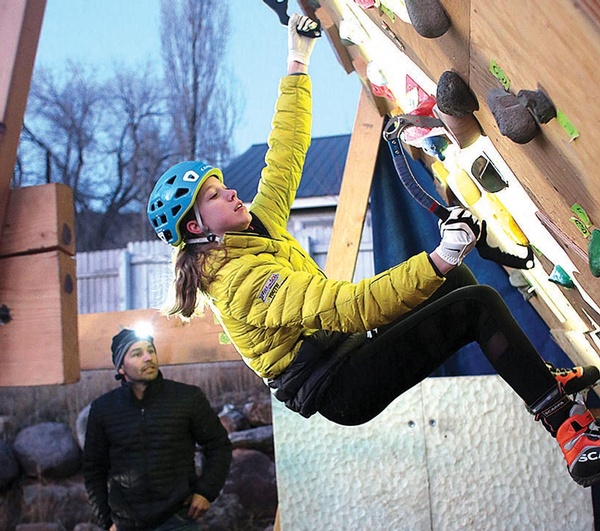 Marcus Garcia looks on while Catalina Shirley, a student at Animas High School, practices her moves Monday night in a back yard in Durango. Shirley, along with seven others as well as coach Garcia, are headed to Liechtenstein for the UIAA Ice Climbing World Cup Youth Championships on Jan. 5-7. Last year, the team took third./Photo by Jennaye Derge

On New Year’s morning, as most of us are struggling to drag our over-served butts out of bed, Marcus Garcia will be boarding a plane for Liechtenstein with a gaggle of promising young ice climbers. For those of us who can’t find the central European country on a map, much less pronounce it, Liechtenstein is a tiny (62 square miles) country in the Alps, sandwiched between Switzerland and Austria. The country is a land of fairytale castles and alpine scenery. But it is also the land of fairytales in the making: the 2018 UIAA Ice Climbing World Cup Youth Championships on Jan. 5-7. (Also known as the International Climbing and Mountaineering Federation, the UIAA more commonly goes by its French acronym, which stands for Union Internationale des Associations.)

Garcia, owner of the soon-to-be-resurrected Rock Lounge and the Team USA youth ice climbing coach, is shepherding eight U.S. junior prote?ge?s – four from Durango and four from Colorado Springs – to compete in the World Cup. This will be the second year in a row that Garcia, who is also a member of the UIAA Youth Commission, has brought a team to compete. Last year, his small team took third in the Youth World Cup, held in Champagny-en-Vanoise, France.

This is no small feat, mind you. Unlike in the United States, where ice climbing is a relatively new and niche sport, it is huge in Europe, Russia, China, South Korea and, peculiarly enough, Iran. So the fact that this rag-tag team of upstarts has beaten some of the world powerhouses is nothing short of a mini miracle on ice.

“These kids train really hard, day and night,” said Garcia, adding that traveling with a group of teens overseas is “always an adventure.”

Even more impressive is that these kids are also tasked with scraping together every penny from their piggy banks, birthday cards, lawn-mowing gigs and crowdfunding sites to pay their own way – about $2,000 a kid. Not to mention – even more so now with the demise of the old Rock Lounge and unconducive weather patterns – it is incumbent on them to find new and interesting places and ways to train.

“The kids have to really take it upon themselves to train,” said Garcia. “The ice hasn’t been safe to climb yet.”

Instead, they have an agreement worked out with Tracy Holcomb, owner of Crossfit Catacombs, to train there, as well as a homemade wall in the back yard at “Kevin’s house,” where they train on Monday and Tuesday nights.

But, Garcia hopes to soon change all this (will all due respect to Kevin, of course.)

“My focus is the youth, to give the kids a place to go,” he said.

With the help of a local family, the Rock Lounge is rising from the ashes of its former and thankfully vacated home. Last spring, Andy and Jean Gresh purchased the North Main property formerly occupied by Treasures by Therese, at 111 E. 30th St., and are leasing it to Garcia. After going through several city planning hoops, Garcia began working on the building in earnest a few weeks ago to build an indoor (and hopefully outdoor) climbing mecca.

“(The Greshes’) generosity is what has really made this successful,” said Garcia. “They know how important it is to have this for the community and the youth.”

Garcia, who also happens to be handy with a hammer in addition to his other varied skills, envisions a bigger, better facility. A Rock Lounge on steroids, if you will.

“We hope to make it an elite training center. Most of our clientele wanted more training opportunities,” he said.

At 5,000 square feet, the Rock Lounge 2.0 will have 1,000 more square feet than the previous gym. The bouldering room will be nearly double the size of the

previous one, the ropes wall will top out at 5 feet taller, and there will be a dedicated kids area for the tiny rockers. (Funding for the latter came from a donation from the Guerra family, whose son, Peter, 11, died last month in a climbing-related accident.)

Eventually, Garcia would also like to have some sort of dedicated outdoor venue as well for ice-climbing training. (As a little side note: despite its name, competitive ice climbing is typically done on artificial surfaces. Sorry for the spoiler.)

Of course, none of this comes cheap. Which is why Garcia has elected to oversee much of the construction work himself, with his own crew of builders. He has also started a nonprofit, Kids Rock, aimed at helping to fund the new venture.

In other words, if you’ll pardon the climbing pun, it’s an uphill battle. Fortunately, it’s something Garcia is well versed in. Last December, he was instrumental in bringing the UIAA/North American Ice Climbing Championships to Ska Brewing. Previously held in Bozeman, Mont., it was the only such event held in the United States and one of only five events last season, and helped put Durango on the international map bigly. It was also an event, incidentally, that he put on by himself, with the help of many dedicated volunteers.

“It was a huge success,” Gracia said, adding that during the 15-minute competition, more than 3 million people tuned in to watch the livestream from all over the world. “A lot of athletes said our comp was one of the best they’d ever been to. The repercussions are huge for the local economy.”

Garcia is also quick to point out that none of his endeavors – past and future – would be possible without help from the local community. “It’s great. I know the community is behind us,” he said.

If all goes as planned, he hopes to have the Rock Lounge’s bouldering room, kids area and studio space open by the end of January.

The ropes room will come later this summer. He’s also put in a bid to host another World Cup event. All this is in addition to starring in his own Osprey-sponsored documentary, his videographer gig for Adidas and various teaching and training stints anywhere there’s ice or rock. In other words, he has no plans of slowing down – at least for another four years. That’s when ice climbing debuts as an Olympic sport, at the 2022 Games in Beiing. And Garcia already has visions of Olympic rings dancing in his head.

“The USA Youth Ice Team will be the feeder program for the U.S. Ice Team in 2022,” he said. “A lot of these kids now competing are going to be future Olympians.” 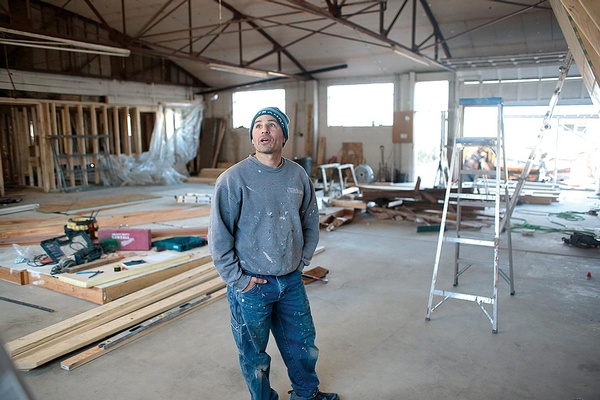 Marcus Garcia stands inside the Rock Lounge's new bouldering room at 111 E. 30th St. He expects the gym to re-open at the end of January, with the ropes wall coming later this summer./Photo by Jennaye Derge

Who: Up to 80 participants aged 14-22 from around the world, including the U.S. Team, which is coached by Marcus Garcia. The team is made up of: Liam and Nathan Foster (Durango); Keenan Griscom (Golden); Luke Negley (Denver); Hannah Langford (Durango but in school in Denver); Catalina Shirley (Durango); and Georgia Witchel (Durango.)