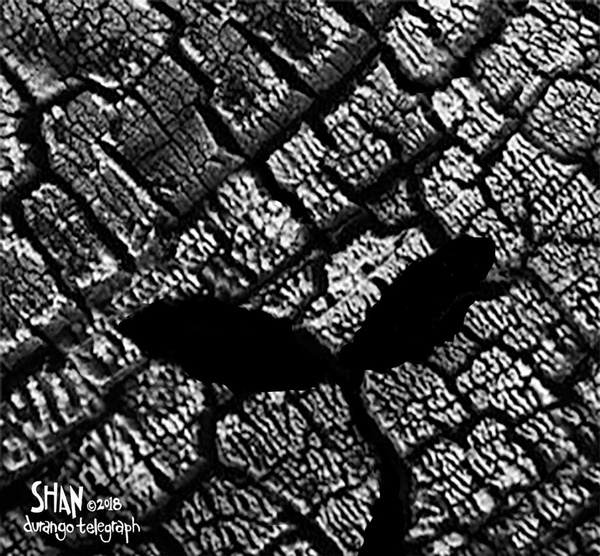 The 2002 Missionary Ridge Fire started one day after my partner, Regina, and I attended a wedding in Chris Park. Out-of-town guests were having a great time smoking, drinking and huzzahing as one does, unaware of the sleeping dragon. We ran around with red cups full of soggy cigarette butts, apologeti- cally but insistently demanding cooperation with our effort to head off a catastrophic waking.

It was futile, of course. The inevitable spark came.

The forests, then as now, were bone-dry, stressed and dropping gouts of powdery pollen. Trees are like that. When threatened, their resources are diverted to the youngest shoots of the un- derstory. The hivemind turns to progeny. Evolution has provided them with what amounts to an insurance plan for continuation of the species. With a response to drastic change.

We humans like to say we embrace change, but what we really mean is we like novelty. Change is usually far less fun. It often comes bundled with heart-breaking loss. That makes us fearful. And fear makes us angry. There’s a lot of anger right now, most of it directed squarely at the antique train that has chugged up the valley regularly for the better part of 140 years. At the height of high tech in 1885, the D&SNGRR is now a romantic anachronism ... a 19th century curiosity that is increasingly out of place in the 21st century reality of climate chaos and pollution.

That is, of course, part of its charm.

As an amateur historian, that train represents the story of Durango for me. As an environmentalist, it’s problematic. And as a citizen of this fragile, tourism-re- liant burg, I understand its economic impact. Tourists that pay to ride the train also pay to eat, shop, drink

and sleep. Thirty-one-thousand cancellations equals a $33 million gut poke just for the month of June. Add to that 150 railroad workers furloughed, the huge hit Sil- verton is taking, the winter dollar damage inflicted if 416 eats up Purgatory, and ... well, you have a disaster in the making.

There’s no getting around it. This change is going to be hard. Let’s not make it any harder.

Accusations directed at the train are understandable but destructive. It exacerbates an already tense political landscape created by an ugly recall and the instability gleefully fomented by our leaders. We need all of our energy directed at helping, sup- porting, caring.

There will be time to digest the causes. To mull the re- sponses. To bark loudly. Now is the time to show our quality. To support the Herculean efforts our resident army of yellow- shirts is making. So far, they have miraculously managed to prevent loss of life and treasure. That record must continue. We must enable them.

The loss of our beloved forests is similar to the loss of our river during the Gold King spill. So many of us have our lives entwined with this place that major changes force a crisis. Yes, much will be gone. Yes, it will never be the same. But we will put our backs to it. We will take our progeny to those charred, magnificent places and make new memories. Like pon- derosa seedlings, our children will thrive in ways we can’t yet imagine. We must set them on that road, fed with our faith in the future.

Love of home is not depend- ent on beauty – it is dependent on love. My brothers and sisters, only by losing that will we truly have suffered an unrecoverable blow.

Durango endures as we endure. Together.