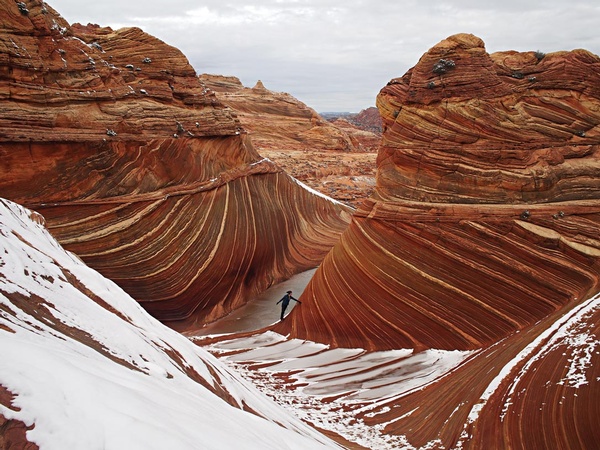 Off-season explorations of one of the Southwest's most iconic landscapes

I’ve been laughed at by enough national park rangers to know that the world is not my oyster. Countless times, I’ve rolled into exclusive scenarios expecting to be granted access. So much “yes” I’ve heard in my life that I’m absolutely dumbfounded when someone says “no.” Haters call it cavalier. I call it confidence.

Last April in Canyonlands, for example, we drove to the Visitors Center to get a permit for backpacking the Needles. With a scoff, the ranger raised a judging eyebrow and cocked his head to the dry-erase board full of X’s on every campsite for the rest of eternity. Apparently, backcountry permits are reserved four months in advance. Who are these people that can plan their lives that far out?

But I’ve realized that, in order to experience as much of the Southwest as possible in my short time on Earth, I must adapt a forward-thinkers mindset. Thankfully, unlike learning a new language or how to do a pull-up, this skill is an easy one to pick up. The only tools required are a calendar, computer and credit card.

The other option is to be ready when an acquaintance pulls an envious permit, like a buddy did back in November for the White Rim. That two-night backcountry authorization led to an unforgettable weekend of bikes, pancakes, a super moon and riotous laughter with 15 of my best friends.

So when a buddy called in October to say he’d won a permit for hiking The Wave in January, of course we said yes, we’d love to join him and his wife.

A psychedelic sandstone playground in northern Arizona, The Wave is one of the most coveted destinations for landscape photographers, rock nerds and anyone who wants to experience as much of the Southwest as possible. Its stellar beauty became world-renowned after Microsoft made it one of the dreamy desktop wallpapers for its Windows 7 operating system in 2009. Since then, the Bureau of Land Management has had quite the time controlling visitors to the site.

Nowadays, only 20 permits are released each day. Ten are issued via an online lottery that accepts applicants four months from the desired hiking date (how my buddy won). The other 10 are walk-in permits doled out at 9 a.m. on the morning before you hike in. This drawing happens at the Grand Staircase-Escalante National Monument Visitors Center in Kanab, Utah, Monday through Friday, excluding federal holidays.

For walk-ins, don’t try to cheat by having multiple members of your group apply; your app will be dis-qualified. For the gamblers, there’s a very rare chance that all 10 permits from the previous day might not have been issued, so a same-day permit might be available. Regardless which lotto you win, the permit is $7 per person/dog in your group.

During the spring and fall, there’s a mere 6 percent chance of scoring a day permit. Meanwhile, summer or winter applicants fare much better, with a one-in-four shot. Considering mountain-dwellers loathe triple-digit temps, winter is obviously the best ticket to ride.

Our trip fell in a mini-weather window over the first weekend in January. We left the fresh powdery pillows of the beloved San Juans and headed West over wide open spaces to Page, Ariz., keeping our eyes peeled for rez dogs that might need a new home. No sun and low clouds flattened the light, and snow softened all harshness to that sprawling wasteland, adding drama to the barren red rock.

The plan was to meet our permit-holding friends, who drove up from Scottsdale, at Lower Antelope Canyon. Not federally owned, this geologic wonder is on the Navajo Reservation where all are welcome to venture – if you’re willing to dole out $33 per person. We opted instead to wander trails back in Page and skip stones on Lake Powell.

When we couldn’t feel our toes anymore, the Dam Bar & Grille offered the perfect place to warm up. No waiting for a table = off-season win. After burgers, we moseyed back to the Best Western, where rooms were only $50 a night. Another off-season win. I’d bucked at the mention of getting a hotel, desiring to sleep under the stars and build a campfire and such, but was over-the-moon that this was overruled. Rather, whiskey and a soak in the hot tub served as movie-magic entertainment.

We awoke to slate-gray skies and cold, quiet weather. Long johns were a must. I threw an extra jacket into my Flash Pack, too, along with lemon-lavender cookies and the rest of the Jameson from the night before. Our buddy packed his Jet Boil to heat up soup for lunch. With these provisions, we’d be the toastiest hikers The Wave had ever seen.

Fueled by coffee and a sundry of continental breakfast goodies, we left Page by 8:30 a.m. and carpooled the 36 miles west on Highway 89. A quick left turn put us on House Rock Valley Road, a clay gravel road. Despite being equipped with four-wheel drive, it was the only question mark on the itinerary: would the road be passable?

The Wave can be accessed from four trailheads, but the shortest hike (3 miles one-way) begins at Wire Pass Trailhead, 8.3 miles south on House Rock Valley Road. Foot-deep ruts were frozen solid, so the eventless drive from the intersection took about 25 minutes. Note to self for the drive out, when temperatures were sure to melt those sparkly encasements of mud.

At the trailhead, a strapping ranger stood smiling with a couple of excited tourists snapping selfies. Despite the frigid morning air, he strutted the lot in a short-sleeved uniform, checking permits and kindly ensuring that trekkers had water, snacks and a map. There’s a restroom at the trailhead, but no water, so I felt extra proud to tell him of our preparedness. No judgy eyebrows from this Walker Texas.

He bid us adieu as we set off for the day’s holy grail. Our journey started in Utah and passed into Arizona, where Coyote Buttes North opens to the rest of the Paria Canyon-Vermillion Cliffs Wilderness Area. At 112,500 acres of designated wilderness, it is but a wee drop in the bucket of the sprawling goodness that is the Colorado Plateau.

Unsigned and unmarked to keep it as pristine as possible, the 3-mile “trail” to The Wave is really a choose-your-own adventure full of as much or little rambling as one desires. Nary a cairn, we relied on the photo-laden map that came with our permit. Our buddy had downloaded the route on an app, too, but there was a primitive element to the quest, as foot-prints in the sand also aided navigation.

It didn’t matter too much; we tried to follow but kept getting side-tracked by the slickrock curiosities this whimsical topography swanks. We listened to our 8-year-old souls and slid down spillways to snowy washes and clambered up icy banks to find yet another hidden gem. Frozen waterfalls were especially alluring, as were the tiny mushroom features plopped with white caps of wind-scoured snow.

Climbing a cumulative 350 feet throughout the journey, The Wave’s “summit” is ultimately captured at 5,225 above sea level. The Wave itself is basically a couple of troughs scooped into 150-million-year-old Navajo Sandstone, like gorgeous, gruesome bowls of ice cream. Water and mostly wind continue to etch the soft rock into an elegant masterpiece of sherbets, pinks, yellows and magentas. Ponds that usually reflect vibrant colors were, for the time being, ice-covered muck. It was beautiful.

The Wave’s story reveals that during the Jurassic age, large sand dunes migrated across this ancient desert. Geologists describe the striated look as “cross-bedded Aeolian sandstone,” which I think means simply that the wind made it look this way. Sometimes the Wave isn’t smooth and groovy. Some-times it’s broken and brittle, unsettled. They say it didn’t cement uniformly because dinosaurs were kicking up the dust, disrupting the process.

Sandstone connotes fragility, after all – especially on the ridges and ribs of The Wave. Treading lightly is as important as giving yourself plenty of time to explore. Experts will tell you all sorts of theories about ideal times to photograph this iconic scene, but streaked in snow, The Wave delivers throughout the day. We spent three hours playing on the cones and domes, slurping soup, munching cookies, and of course sipping Jameson.

When it was time to saunter back to the car, we chose a new route, because when you get a ticket to ride The Wave, you’re quickly reminded that the world actually is your oyster. As expected, House Rock Valley Road was a peanut-butter nightmare, but we survived, grinning at the strapping ranger who watched with a smile as we worked the truck out of a muddy rut. We waved. It only seemed natural. 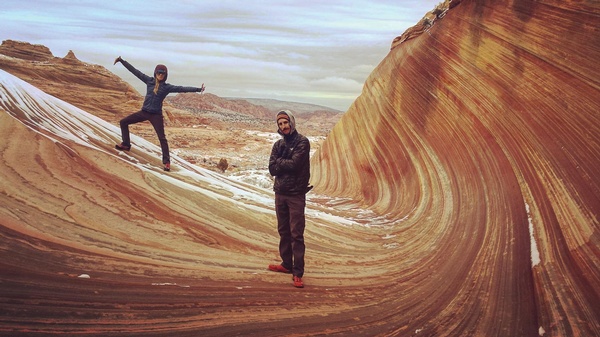 Views from any vantage point reveal canyons, cliffs and buttes as far as the eye can see. Check at BLM visitor center or the Paria Contact Station to learn the latest road conditions, especially if there has been recent rain or snow./Photo by Brian Jump