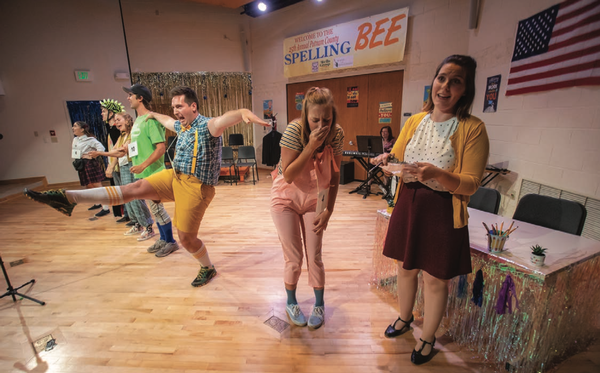 We can credit Judy Garland and Mickey Rooney for making the classic “Hey, let’s put on a show!” trope famous. You know how it goes: a group of friends stage a musical production practically overnight to save the day. Well, Fort Lewis College students Hallie Denman and Harrison Wendt have one-upped the stars of old by declaring, “Hey, let’s start a theater company.”

The result is Animas Rooted Theatre Company, which in six months went from a brainstorm on a shared Google Doc to opening night of its first production. Tonight (Thurs., July 18), the company debuts at FLC’s Roshong Recital Hall with the Tony award-winning musical “The 25th Annual Putnam County Spelling Bee.”

“Harrison and I have learned so much about what it means to put on a show, and we’re both really interested in the theater world and going on as a career after college,” Denman said. “It’s helped us so much to understand more of what goes on outside of just rehearsals. It’s been a really good learning experience, I think, for everybody involved.”

Animas Rooted Theatre Company, or ART Co. for short, was born out of these young actors’ desire for more summer theater opportunities. The college theater department puts on several productions a year, and students can also audition for other theater groups in town, but there’s just not enough theater happening during the summer months – especially musical theater, which is both Denman’s and Wendt’s passion.

They thought about going to Pagosa Springs or Creede and auditioning for summer shows there. But, they said, they love Durango and don’t want to leave. Thus, they decided to make it happen themselves.

They pitched the idea of a summer class to the theater department, but the idea struck in January of this year, which was too late. Ditto for starting a student club. So, naturally, they created their own non-profit organization, and the ART Co. became real.

“If we want people to take us seriously and be able to get donations and write grants, we needed to have something behind us instead of being these two random kids who wanted to start a theater,” Denman said.

“It was a huge dream,” Wendt added. “We both believed in ourselves, and we really did commit ourselves to get to the point where we’re at. Since March, we’ve raised more than half of our goal to put on the musical.”

While these two co-creators acknowledge that starting the theater company was a selfish act – they wanted to create something they could participate in – ART Co.’s mission extends well beyond its origins. Its purpose is to provide artistic opportunities for young adults at FLC, in Durango, and in the region, while also offering a summer musical theater experience for locals and tourists alike.

The more theater in a town, the better, Denman said. They don’t view ART Co. as a competitor to any of the existing troupes and companies in the region – after all, they’re all working toward the same ends of expression, development, and entertainment. And each one has its own angle. One of this duo’s primary objectives is to give FLC students a chance to act in the summer, while also integrating them with the community theater scene in town.

“A lot of the students stick to doing theater with the school,” Wendt says. “I think it’s really important to branch out and try other things.”

Fittingly, the first production of this theater company driven to support young adult actors is about a group of even younger people. “The 25th Annual Putnam County Spelling Bee” tells the story in song of six middle school students preparing to compete in the titular spell-off. It’s as awkward as it sounds. Only now, thanks to all things sacred, all audience members older than age 14 get to laugh at all the cringe-worthiness.

They chose the show for a number of reasons. It’s a feel-good summer show, sweet, silly and weird, Denman said, promising that people will leave feeling “good and mushy-gushy.” Its cast is the right size for their first production – no 30-member ensembles here. No epic monologues, no big sword duels. Yet it’s fast-paced, and all the actors get to emphasize exploring their individual characters and their emotional journeys.

“It’s one of the funniest musicals I’ve ever been a part of,” Wendt said. “We were trying to find something that would be fun for audience members and really fun for the people in the show, too.”

The theater company enlisted some professional help for the production. The musical is directed by Theresa Carson, with accompanist Paula Miller and choreographer Emily Simpson. Other off-stage roles are filled by recent graduates and current students, such as stage manager Izabella Gray and music director Abrianna Judson.

“They’ve all been awesome and supportive, and just really wanting to help us get this thing off the ground,” Denman said. “We’re really lucky to have such a wonderful team.”

Alongside founding and directing a theater company, Wendt and Denman are producing the musical. They are also starring in it, because they’re crazy. “I think we can both say we’re pretty tired,” Wendt said. “But it’s so rewarding, what we’re doing.”

Denman plays Olive Ostrovsky, who bears a complicated relationship with her parents and therefore has made good friends with her dictionary. She’s supportive of the other spellers, and she breaks out of her mold by the end of the show. She forges a special friendship with William Morris Barfe?e.

Naturally, Wendt plays young Barfe?e, who has to navigate middle school with the unfortunate last name. To add salt to the injury, he’s incredibly awkward and has a rare mucus disorder, yet somehow he still carries an outsized ego. And you better believe that the other characters play off of his name plenty throughout the production.

Opening night is bound to be special – both actors/producers promised they are going to cry, seeing the culmination of six months of dedicated effort. Their passion is as apparent as their joy when they discuss the theater company, and they’re both committed to making certain this is not a one-summer fling.

“It’s been really humbling to see people stand behind us and want to see us succeed,” Denman said. “Just to know that we did this and we have really amazing artistic people behind us ... that’s been the most rewarding, just to be able to have so much love in this community.”

“We defied all odds,” Wendt said. “We created a theater company and put up a production. We’re doing this.” 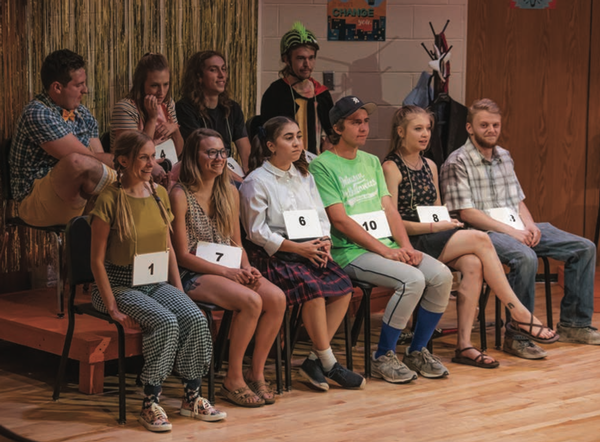 The cast of the first production from the Animas Rooted Theatre Company, or ART Co. for short, includes its founding members and other Fort Lewis students./Photo by Stephen Eginoire