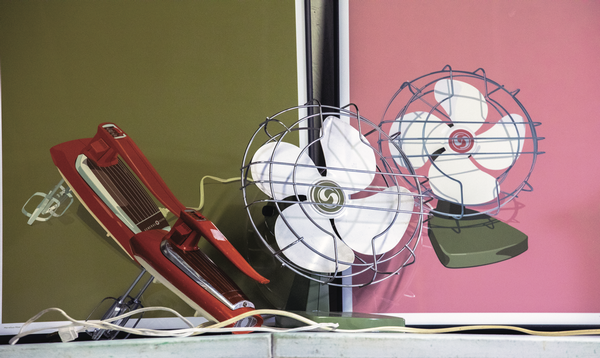 Each piece in "Tim Kapustka's Garage Sale" highlights the story of everyday stuff, like the retro mixer he bought from an elderly woman during an annual event in his hometown of Imlay City, Mich., called "Garage Sale Mania." That $2 mixer, pictured above, is displayed on a background native to the 1970s era it which was made./Photo by Stephen Eginoire

Garage sale season has begun in Durango, and just in time for this informal time of buying and selling, local artist/graphic-designer Tim Kapustka has created a series of garage sale-themed illustrations for a solo show at Studio &, 1027 Main Ave. (where he is founder/co-owner). “Tim Kapustka’s Garage Sale” opens 5 p.m., Fri., May 10 (no early birds, please) and runs through Sat., May 18.

Each piece in Kapustka’s show depicts an item one might find available for purchase in a driveway, yard, or garage this summer. No actual used treasures will be available for sale, (Kapustka concluded this would distract from the art), but the show opening will include free grilled frankfurters and fresh-squeezed lemonade, and a fun atmosphere where anyone is welcome to saunter in, and peruse and purchase original artwork.

While many Durangoans are aficionados of the yard sale, Kapustka’s appreciation may go a bit deeper due to something called “Garage Sale Mania.” No, this is not a mental affliction, but rather a spectacular, annual four-day event in his rural hometown of Imlay City, Mich. (which serendipitously coincides with Kapustka’s art opening). In what amounts to a garage sale smorgasbord, the Mania attracts bargain-hunters from across the region with around 100 separate sales in a town of about 4,000.

While the Mania provided many a shopping experience in his formative years, one particularly epic day sticks in Kapustka’s mind: “I happened to be home from Chicago, where I lived at the time. I kept running errands for my mom and would invariably stop at a garage sale or two en route. I wound up making five or six trips, finding treasures each time.”

In fact, Kapustka still has a lot of things from that day, including a mixer he bought from an elderly lady who was impressed he even knew what it was. “She wanted to give it to me, but I insisted on paying the full price, $2,” he recalled. In addition, he also scored an old Faygo crate (that lives at Studio &) and a ’70s Schwinn 10-speed during that particular Mania.

As it turns out, that $2 mixer made it into Kapustka’s show, illustrated exquisitely in bold colors on a solid background with a green hue native to the 1970s. With one of Durango’s most identifiable styles, Kapustka’s work is created through vector illustration, a type of computer art. His particular oeuvre emphasizes brevity and simplicity, with a sort of pop art sensibility, while striving for detail and depth. “Basically, I try to make sense of the image in an over-simplified way ... which, often times, isn’t simple at all.”

Working from photos, Kapustka forces himself to look at subjects in a way that accentuates shadows and highlights. “When I do what I’m trying to do the right way, the viewer will immediately recognize the subject as something familiar, but upon closer inspection, that familiar object is comprised of a bunch of interesting shapes,” he said. “I really enjoy that the details take on a life of their own, while simultaneously defining the subject.”

Just as the simplicity of the finished product belies underlying complexity, Kapustka’s ethos behind the show gets at the essence of the rummage sale and the very nature of “stuff.” At the heart is the notion of a “Marketplace of Memories.” As he observes, things bought and sold lose their previous context (and associated memories) as they pass onto someone else, who will create new contexts and memories. The garage sale itself is a sort of “stuff limbo,” which is the primary reason Kapustka’s illustrations are purposely set against a blank background, void of contextual clues. He even sees a parallel to this in his own creations. “When I’m making art, it’s mine. I can do whatever I want with it,” he said. “When I am done and put it on the wall for the public to view, it isn’t mine anymore ... it’s everyone’s, and it’s up to the viewer to determine what it means.”

The inception of the garage sale theme came from the sudden and unexpected death of Kapustka’s father in early 2018. “My original idea was to do a show celebrating a collection of stuff that was my dad’s, kind of a super-passive tribute to him,” he said.

However, as Kapustka sifted through his father’s earthly possessions, the idea evolved. “It is an interesting exercise to go through the remnants of a person’s life without them around to help explain things or narrate for you,” he said.

Kapustka was struck by the beauty and repetition of many of his father’s things, in particular, gas cans and minnow buckets, of which he had several. “ I quickly realized that I didn’t need to do the tribute. I’d done it for myself and it really helped me heal and deal with his death ... and maybe those things didn’t need to be public,” he said. “Maybe I wasn’t ready to give those things away.” The gas can and others were illustrated for the show, but only because they were great subject matter, he said.

This process of going through his dad’s stuff also led Kapustka to a deeper investigation of things and the meaning we attach to them. It begged the question: what happens when an item invested with personal meaning changes hands, especially at a yard sale?

One anecdote sticks out for Kapustka from a particular encounter in Imlay City, sometime in the early aughts. “There was a little, strong old woman, a fixture around town, who had what seemed to be a perpetual garage sale at her house, to the point where she just left it set up in the garage and opened it up for sale periodically,” he said. Over the years, Kapustka would frequent her sales, mostly buying plant starts from her garden.

On this particular visit, Kapustka was poking around the back of the garage and spotted a cool, old shirt which turned out to fit him perfectly – upon which the woman said, “You are his size.” She left and came back with four more shirts, still in the packaging, and said, “These will fit you too!” The “he” in question was her deceased husband, who Kapustka had never known – a tool and die man, like so many in the place where he grew up – who has been gone since 1966.

“This woman had been holding onto these shirts for four decades,” Kapustka said, “waiting, I truly believe, for me to poke around the back of her garage.”

Kapustka didn’t try on those shirts – he knew he didn’t have to. When he got home, he took the pins out of the folded, never-worn shirts and hung them in his closet. “I paid $16 for them and took this transaction very seriously. I was, and still am, honored to be the new custodian of these items,” he said. “They were great shirts, and I wore two of them so much that they just flat out fell apart. One of them I kept for a long time after it was unwearable, while another I still have in my closet.”

Lesson learned: the yard sale is a wonderful conduit for transferring possessions on the most intimate level, creating a meaningful human interaction. While used goods can be found in a variety of venues (thrift stores, flea markets, curbsides, etc.), nothing quite matches a garage sale for the chance to intermingle with one’s fellow beings in a “Marketplace of Memories.”

For this reason, Kapustka believes garage sales could also help bring folks together in our increasingly polarized times. “There is a lot of bullshit going on, with a very real attempt by the powers-that-be to keep us as a people divided and bickering amongst ourselves,” he said. Perhaps, something as simple and wholesome as a garage sale can help bridge that divide. “Anyone can go to or have a garage sale. It’s simple. And I’m happy to go to anyone’s garage sale – well almost anyone’s,” he said. “It doesn’t matter to me what their religion, political alliance, opinion on the moon landing, etc., is ... I want to dig through their old stuff.”

So come on down to Studio & this Friday and commingle with one’s cohorts – perhaps some actual garage-salers will confusedly show up and be “forced” to take in an art show – all are welcome. But one final point: everyone should take heed of a key difference between Kapustka’s art and the used items they are based on. There is no haggling on art! It’s really tacky. Save it for an actual garage sale. Indeed, if you see Kapustka rummaging around town, say hello and pay attention to his haggling skills. He’s a real pro at the game. 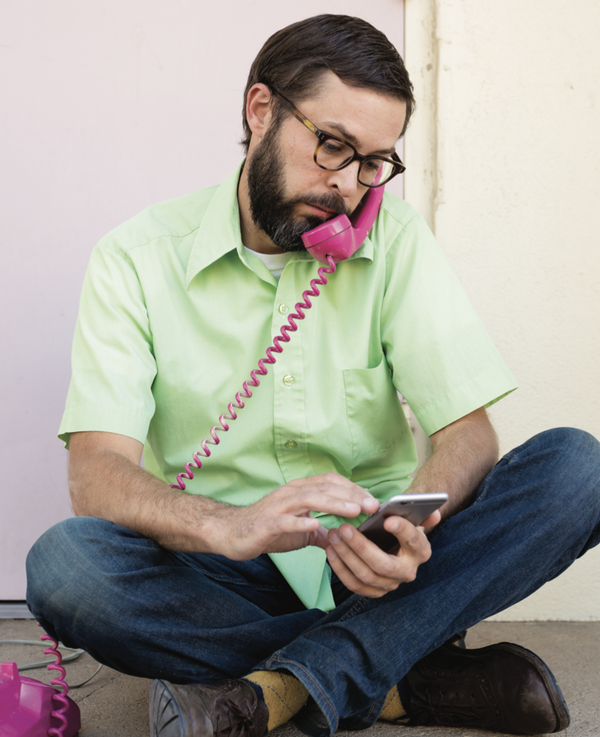 With one of Durango’s most identifiable styles, Tim Ka- pustka’s work is created through vector illustration, a type of computer art./Photo by Jake Polster-Sadlon