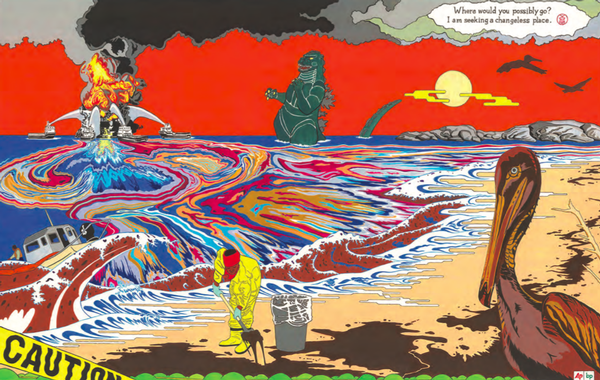 Jave Yoshimoto's work "Evanescent Encounter" is one of many of his pieces that will be on display at the Durango Arts Center gallery this month.

Refugees, earthquakes, tsunamis and nuclear catastrophe are not your typical artistic subjects, yet for Jave Yoshimoto they are the catalysts for an emotionally charged body of work.

Opening Sat., July 7, at the Durango Arts Center, “Intransigent Stratum” is a one-man exhibition of this multi-cultural artist, educator and therapist’s paintings and sculptures. Stylistically inspired by the 18th century woodblock prints of Hiroshige and Hokusai, Yoshimoto combines their iconic art form with contemporary Japanese Manga – the internationally popular graphic “comic book” style. Yoshimoto’s visual language stems from his being born in Japan, the son of Chinese parents

who eventually migrated to the United States.
As a boy in Japan, he was singled out as “the Chinese kid,” but after moving to San Francisco, children of Chinese heritage referred to him as, “the kid from Japan.” His inescapable burden of always being different and never quite belonging taught him compassion for the displaced and disadvantaged.

Fortunately for Durango, Peter Hay, DAC’s Exhibits Director, met Yoshimoto in Tulsa, Okla., when Hay worked at the Living Arts Gallery. Currently, Yoshimoto splits his time between Tulsa, where he is engaged in a two-year research project at the Tulsa Artist Fellowship, and Omaha, where he teaches at the University of Nebraska.

The art appearing in the Durango show has been travelling around the country for the past six years, gaining Yoshimoto, 43, national recognition. He said the inspiration for the show’s title came from the humanitarian crisis in Greece, where, in 2016, he volunteered on the island of Lesbos to help refugees with everything from dry clothes to hot meals.

The impact of his hands-on experience left him speechless. “Words cannot describe the overwhelming flood of emotions and thoughts that went through my mind,” he admits. “And there is no greater feeling than receiving the grateful smile on these strangers’ faces.”

There are more than two-dozen pieces in the DAC show, and many honor the bravery of refugees and their often nightmarish journeys. The subject matter of the highly illustrative imagery ranges from the nuclear melt-down at Fukushima Daiichi, to the devastation of hurricanes Katrina and Sandy, as well as Japan’s 2011 earthquake and subsequent tsunami. Yoshimoto, a trained art therapist, understands struggle and survival and says he seeks to create links of empathy between audiences and the subjects of his paintings, as well as between the world and himself.

Yoshimoto’s work possesses an uncanny beauty in its composition and color; his detail and draftsmanship are remarkable in their intensity and narrative. Adding to his technique and Asian influence, Yoshimoto has frequently utilized Godzilla, the fanciful prehistoric monster, as a metaphor.

The artist acknowledged incorporating the beast in his pictures as a surrogate of sorts. “I’m basically painting myself as Godzilla traveling to different parts of the country. Godzilla has now become my compositional signature, rather than a tool to send a message.”

He further suggests that as a recognizable character, Godzilla makes his work more accessible to viewers.

“They see Godzilla and think it’s funny. But when they actually look closer at my paintings they realize this is serious stuff.”

Ever aware of social consciousness, Yoshimoto encourages his students to explore their personal identity and experiences and put what they learn into their creative compositions, while continuing to develop technical skills.

In addition to his broad-ranged exhibitions, the artist has received a letter of recognition from the United Nations and in 2015 was awarded a “Joan Mitchell Foundation Painters and Sculptors Grant” which acknowledges artists creating work of exceptional quality. Mitchell was an acclaimed American abstract expressionist painter and printmaker.

Grants and stipends from the universities where Yoshimoto teaches subsidize him, so he doesn’t offer his paintings for sale. However, his dimensional, laser-carved sculptures replicate many of the painted panels and are available for purchase. Explaining his “not-for-sale” policy, Yoshimoto said, “I decided a while ago that I didn’t want money to be the motivation for making my work, and I keep the paintings together as a series to do traveling exhibitions.”

In a 2013 interview, Yoshimoto noted it is more than just the natural disasters that create the terror. It’s how, in the news cycle, each is swept away by a wave of information resulting in a “social amnesia” that is almost as frightening as the disaster itself.

It is ironic that completing each piece takes a great deal of time in contrast to how long today’s media spends on the very same disasters. One piece in particular is a 27-foot scroll that is so complex that it took him well over a year to finish.

Witnessing “Intransigent Stratum” is a privilege for all who see it. The work demands time to truly explore, and visitors will want to return numerous times. Fortunately, Yoshimoto will address attendees at the reception this Saturday and discuss his process, philosophy and the work on view.

In addition to the Yoshimoto exhibit,

the upstairs library is the scene of Mary Ellen Long’s extraordinary environmental, organic work in a presentation titled, “Collection.” She will be showing collages, hanging and table-top installations, and 50 objects along a narrow shelf. All but three of the pieces in the show were created specifically for this exhibit. “The work has been done in the past two and half years. In other words ... a big show in an intimate space,” Long said.

Rounding out the world-class presentation will be art from local Cheryl Berglund. Displayed at the entrance to the Arts Center and on the walls leading up to the library, Berglund’s mixed-media collages combine abstract design with recognizable images. They incorporate acrylic paint, hand-made paper and natural materials.

Much to see and contemplate at the DAC.