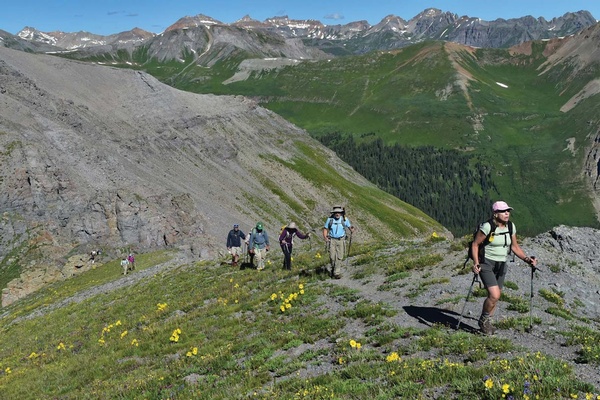 Age is more than a number; it’s an unapologetic excuse to ski, hike, bike and chit-chat to your heart’s content. At least that’s the tale for the fine folks of Seniors Outdoors! (exclamation point intended) – Durango’s outdoor recreation and social group for locals 50 years old and beyond.

In fact, they’re so busy living that it was hard to track down any of its 600 or so members to interview. I probably would have had better luck planting myself at the bottom of Chair 1, on the look-out for a group of baby boomers bombing down.

“We don’t think we’re old,” 82-year-old member Betsy Petersen says. “I still felt like I was 16 until a couple of years ago on my 80th birthday.”

This spring, “the SO!,” as members call it, celebrates 20 years of summits, canyons, tailgate parties, newcomers, old timers and a boatload of Rocky Mountain-high experiences.

The group was founded in 1998 by Charlie Speno, director of the Durango Area Agency on Aging. He projected that, by 2008, Durango’s seniors in need of services wouldn’t be the 60-year-olds (the “seniors-in-training”) but rather the 70-and 80-year-olds.

Not that there’s anything wrong with knitting, chair yoga and bingo, but Speno’s solution to ease the burden on city and county coffers was to keep seniors’ bodies and minds sharp.

He put a notice in the newspaper inviting seniors interested in forming an outdoors club to meet at the Durango-La Plata Senior Center. Eight people showed up to the first gathering. They planned a hike in the phantasmagorical Bisti Wilderness. The next month, 16 people went on an adventure near Needles. The demand was obvious; it was time to get organized.

First on the agenda was to select a club name. Their “by-the-people, for-the-people” approach led to a vote; Second Wind Outdoor Seniors, Vintage Vagabonds, Durango Mountain Hoppers and The Happy Wanderers didn’t make the cut.

They also set membership dues at $10 a year for singles and $12 for couples. The money would mostly cover mailing costs for the newsletter, The High Point, but would also support purchasing a tripod for group photos.

A Board of Directors was chosen, and the SO! was officially off to the races, doubling in size each time they gathered. Outings were shaped to meet the needs of different ability levels, and subgroups developed for interests beyond hiking, like horseback riding, cycling, skiing and happy-hour-ing.

The speedy growth spurt would not have been possible without the indefatigable leadership of Dell Manners, who was sworn in as the first SO! president. Having moved to Durango in 1997, the then-64-year-old spry newbie was one of the first members.

“I needed to find people to play with,” she says.

With SO!, she found plenty of people who can (mostly) keep up with her seemingly boundless energy. Her perfect day, she says, is chockfull from start to finish: skiing in the morning, riding horses in the afternoon and ballroom dancing into the night. She thanks eight decades of bebopping and “good genes” for keeping her strong.

Despite a double knee replacement a few months ago, she’s still two-stepping at the Wildhorse with the present love of her life, Bert, whom she picked up seven years ago at the SO! Singles (SOS) club.

Finding love is a common story for the not-so-lonely-heart-club members, though others prefer their independence these days. One of these happy bachelors, John Montle, also happens to be the oldest member of the group (the 85-year-old, who instigates many of the ski outings, didn’t know he was the oldest until this article). He retired 21 years ago and moved to Durango – just in time to get involved with SO! in the early years.

His greatest SO! memory is a full-moon snowshoe hike he planned years ago at Molas Pass. Thanks to a volcanic eruption halfway around the globe, ash in the atmosphere made the moon a lovely, hazy red. As if that wasn’t cool enough, a total eclipse was also in the forecast, AND Saturn’s iconic rings were in view – some-thing that happens every 17 years.

He didn’t know if anyone would want to snowshoe on a cold winter’s night, but he hiked out early to face one telescope toward Saturn and the other to track the moon. Manners donated firewood, and Montle brought hot dogs to roast.

“Forty people showed up,” says Montle, still in disbelief. “It was one member’s first outing, and I remember her  saying,‘I can die happy now; I’ve seen the rings of Saturn.’”

One time, Montle met a wife at SOS but now finds his freedom to be the absolute berries. He fills his week skiing, hiking, golfing and volunteering, which is just as big of a part of SO! as having fun.

At each of their four SO! potlucks throughout the year, members collect food and money for local nonprofits, like the Volunteers of America, Durango Food Bank and Manna Soup Kitchen. Passionate about preserving nature, SO! Members donate to the San Juan Mountain Association, Colorado Trail Foundation and Trails 2000 and adopt two segments along Highway 550.

Despite tireless efforts to be good stewards of public lands, some members of the SO! got in trouble with the law over this very issue.

The longest-active member and hiking leader of the SO! is 82-year-old Howard Drake. In 2011, he and a buddy, Harry Hance, were hiking on BLM land northwest of Cortez. They stumbled upon a Native American burial site, where a shallow grave revealed a dusty human skull. For the retired teacher and scientist, this might as well have been buried treasure. The two marveled at the relic before covering it up.

“I think you should be reburied after 800 years,” says Drake.

He and Hance told fellow SO! members about the discovery, and an excited group hiked out to see the ancient corpse. After the show-and-tell, Drake covered it back up, naive to the fact that touching the skull is illegal, classified as “a disturbance of artifacts” or “excavating” under federal law. Unfortunately for Drake and Hance, one of the hikers in the group was actually an undercover BLM officer, who had heard rumors of the Indiana-Jones-esque mission.

After asking to see the skull, the secret agent reported the incident, and the puzzled hiking leaders were arrested. A trial determined that 76-year-old Drake and 81-year-old Hance were guilty, and the rogue explorers were handcuffed, fined $1,000 each and sentenced to jail. Drake got 10 days, and Hance, three.

“It upset Harry so much that he moved to Arizona,” says Drake.

Since the episode, the SO! doesn’t take many outings to explore archaeological sites. Rather Drake enjoys leading hikes near his home in Silverton, where he’s lived since 1986. He’s famous amongst SO! members for his apres-hiking treats of coffee and chocolate cake.

While Drake might be the only member to serve time for an SO! activity, Betsy Petersen points out that these mishaps are what make SO! rich.

“A lot of us do things we might not have done had we not joined SO! and met one another,” says Petersen. “We do have some near calamities, but we survive. Those are the things we remember: what almost happened. We’re just full of those.”

As motivated as they are to find adventure, safety has always been a priority for the SO!, which boasts very few incidents over the years. On every hike, leaders carry walkie-talkies and first aid kits, equipment that’s funded by membership dues, which is now $15 per person per year.

“We always have a sweep,” says Petersen. “If a person has to go slower, they can go slower. If they need to turn back, they can turn back with a buddy.”

There was an almost-heart-attack, says Petersen, and once, a group member got separated on a hike and ended up in Rico. But he ran into some friends and got invited to a birthday party, so no harm came to him.

“Our hike coordinator, John Martin, said this group is just the greatest because they just lead themselves,” she adds. “And nobody complains or says ‘why don’t we do this or that?’ We don’t compete with each other, but we certainly encourage each other. We just have a good time.”

If you’re plotting how to crash the SO! Reunion party next week, or any other enticing SO! outings, club members have a go-to one-liner that no one will claim as having said first: “You can join, if you can keep up.”

For more info. on SO! visit www.seniorsoutdoors.org. 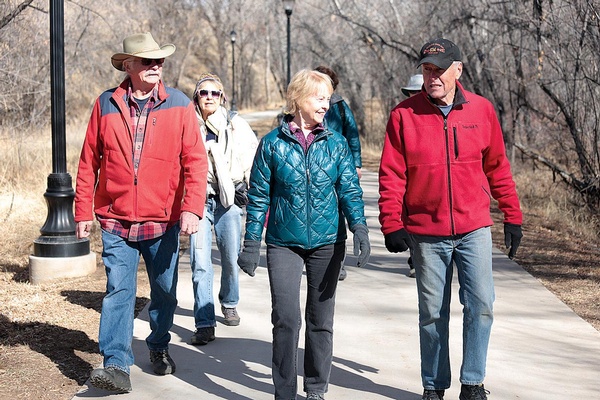 Seniors Outdoors! Wednesday Wanderers walk along the Animas River Trail this week. The group has more than 600 members./ Photo by Jennaye Derge 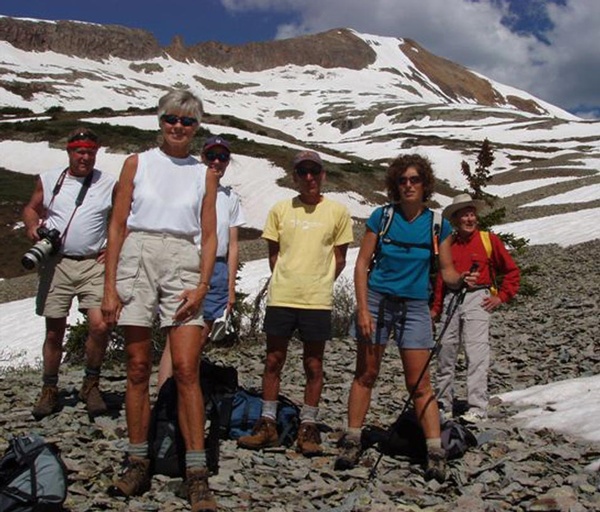