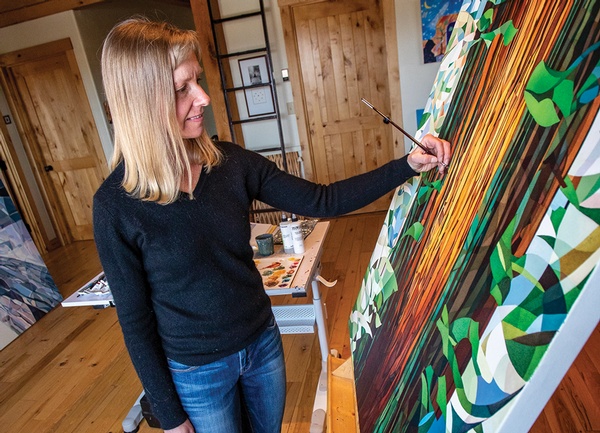 Holly Hagan works on "Sempervirens" (Redwood Giant) at her Durango studio this week. She's bringing that piece as well as "Communion" to Denver this weekend for an art demonstration in conjunction with the Monet exhibit./Photo by Steve Eginoire

All creative artists work alongside their many influences. It’s impossible to escape our inspirations – yet it’s another thing to work in their shadows. Imagine building a house next to a Frank Lloyd Wright residence, or writing poems at Mary Oliver’s table. Durango painter Holly Hagan is about to experience that thrill (and that pressure) firsthand this weekend, when she takes up shop as a featured artist at the Denver Art Museum’s Claude Monet exhibition.

“I’m excited. Nervous,” Hagan said. “I hope I get some glow off the high everyone’s going to be on from walking through Monet’s exhibit.”

The Weekend Artist Demonstration program gives visitors a chance to witness creative types – traditionally a reclusive bunch – doing their thing. This Saturday and Sunday, Hagan will set up a temporary studio near the entrance to the museum, rather like an artist in the zoo. She’ll work on a painting in progress, in her signature fractured-light style, with three of her finished pieces on display. Museum visitors are welcome to enter the space and talk with her about her process, but most guests are likely to observe from the outside.

Hagan, like most artists, is used to working in solitude, but she’s also anticipating the challenge and the opportunity of connecting with a wider audience in real time. With her spectators in mind, she’s strategized a game plan for how to conduct her demonstration.

She considered working on a nearly finished piece during the weekend: “Sempervirens” (Redwood Giant) is her best work to date, she said, and she wanted to put her finest forward for the event. However, she finished that painting in the fall and opted to include it in the event alongside other completed pieces, “Communion (Cormorants)” and “Path” (from her “Interconnectedness” series). So, she went bold and started an entirely new painting for her weekend residency.

“Why don’t I give people an opportunity to see the whole thing in different stages?” Hagan figured. “I actually have sections of the painting that are drawn in line, and then sections that have the first stage of what I call my map, which is a monochromatic painting. Then I have the next stages where I start to lay down color.”

In the end, she’ll be working on a 16x16-inch section of a 30x40-inch canvas, with the rest showing these different strata of her work. This new painting is inspired by an autumn trip Hagan took to the North Rim of the Grand Canyon, where the flora caught her eye even more than the geology. Thus, it’s actually a scene of oak trees in the sunset light, set up by the uncharacteristically dark blue canyon.

How that will translate to her spectators, she’s not certain. “It’s hard to know what somebody’s doing when you see a work in progress,” Hagan acknowledged. “Especially on a big painting with a lot going on in it. I have a feeling this painting will seem a bit abstract. Seeing the finished products there might help tie the whole process together. I’m hoping people will walk by and think there’s something worthwhile in what I’m doing.”

Working alongside a collection of Monets would be a highlight of any painter’s career. It’s particularly notable for Hagan, though, considering she never considered herself a painter until about half a dozen years ago. She studied  drawing in college, then went on to become a nurse and left art entirely. The artistic work she’d done didn’t feel like capital-A “Art” to her, though, because those pieces weren’t the sort of creations that could transform their viewers.

Then, in the last decade, she took up painting. That’s when all her styles and visions fused together to create her own personal style and voice. She finally felt that she was building bridges through visual imagery – moving people into the unknown, opening them to other kinds of experiences.

“It’s nice to look at a pretty painting,” Hagan says. “But I think it’s far more powerful when the viewer is encouraged to move beyond the painting into the realm of myth, where the big questions are. That’s what gets me fired up. I hope when people look at my work, even if they don’t articulate it, that it moves them or stirs them in some way off the point where they started.”

Hagan’s painting style clearly stands out – as it would even if the Denver Art Museum had never heard of her. She describes her process as “drawing with paint” and calls herself “not a very painterly painter.” Her work emphasizes color and light, which were considerations in the selection for the Denver Art Museum’s demonstration program. She embodies a spirit of twinkling magic on the canvas not dissimilar to Monet’s. But unlike the famous impressionist’s softness, Hagan’s paintings fracture the imagery with stark colors and strong lines. There’s perhaps a greater sense of mystery living in the realms as she paints them.

But the fractures in the world don’t tend to leave viewers feeling broken themselves. In fact, Hagan sees how society and technology have isolated humans from nature and from each other. And in the landscapes of the Four Corners, where she draws most of her inspiration, she finds the unity that can bring us back together.

“With fragmenting my work, I’m really not showing separation,” she explained. “I’m showing that everything works cohesively together ... It’s all interconnected. There’s a radiance that flows through all life. It’s what makes us alive. It’s that spark.”

Hagan is naturally curious to see what lies ahead for her after this momentous weekend in Denver. Some things are already coming together: she has a comprehensive solo show at ReCreative Denver in July, for instance. For now, though, she’s thrilled at the opportunity to present her work to the public and to represent the far corners of the state in a program primarily reserved for Metro-area artists. She’ll be posting about her experience on her Instagram story, for those curious to follow along from Durango, and she hopes those in the area will swing by to say hi.

“I’m so humbled. I’m honored,” Hagan said. “I’m still walking around with a smile on my face. I just think creating the art is really the journey, and I feel glad to be able to share with other people.”

Holly Hagan will be demonstrating her art outside the “Claude Monet: The Truth of Nature” exhibit (which, sadly, is long sold out) at the Denver Art Museum from 12 noon – 3 p.m. Sat. – Sun., Jan. 25-26. Check out more of Hagan’s work at theartofhollyhagan.com/ or on Instagram: @hollyhagan59. 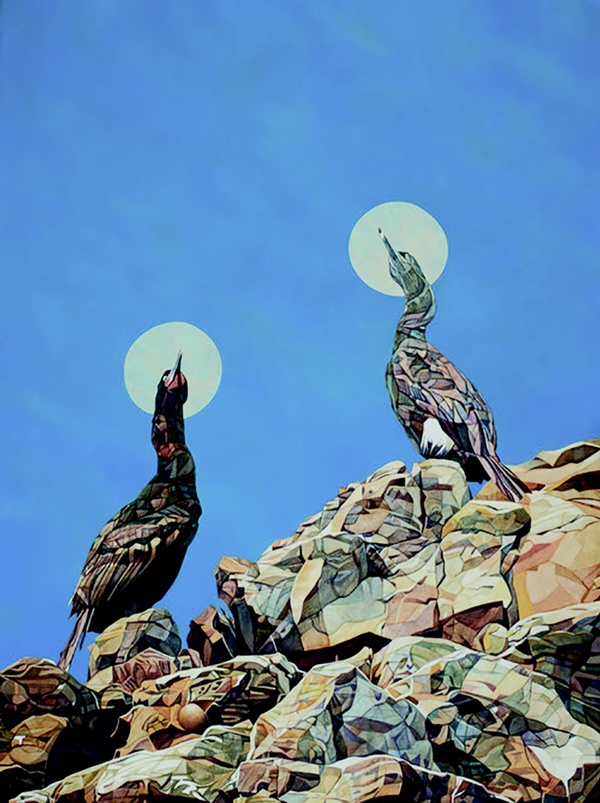