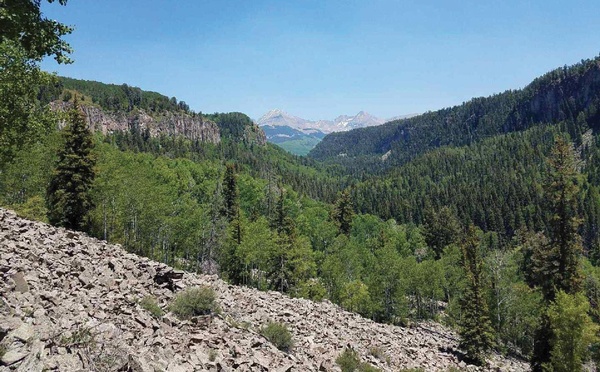 An old, neglected spur near Mancos is getting spiffed up. But this isn’t the kind of spur that jingle, jangle jingles. This is a spur of the dirt, singletrack variety – although it no doubt has been trod by many a bedecked dusty boot over the years.

We are talking about the Mancos Spur of the Colorado Trail, a gone-from-modern-maps-but-not-quite-forgotten side trip off the iconic thoroughfare. And now, a group of trail advocates from Mancos – aptly named the Mancos Trails Group – is hoping to return some of the 23.5-mile spur’s former luster.

“Trails Illustrated maps from the 1990s actually had the Mancos and Gunnison spurs listed,” Mancos Trail Group president Robert Meyer said Tuesday. The Mancos Spur was made up of the Chicken Creek, West Mancos and Sharkstooth trails, which are still in existence today. However, beset by hard times and financial shortfalls, the Colorado Trail Foundation was forced to abandon maintenance of the spurs sometime in the early 2000s.

As for the Forest Service, which oversees the land which is located in its Dolores District, well, we sadly know the story there.

“It was haphazardly maintained over the years, but the Forest Service just didn’t have the money,” Meyer said. “Slowly, it just degraded in quality.”

The spur slowly fell into disuse and obscurity, all but disappearing from mention on any modern map. And with only a few hardy souls attempting to take up the maintenance – most recently the Mesa Verde Backcountry Horsemen – the spur, well, it got rusty.

Enter the MTG. Consisting of a small army of Pulaski-wielding volunteers working under an agreement with the Forest Service, plans call to cut back brush, install signage and, eventually, bring the trails back into shape. They’ll also change the name from Mancos Spur “of” the Colorado Trail to “to” the Colorado Trail. Semantics perhaps, but Meyer said it will help distinguish the trail as something separate from, but leading to, the CT.

“This has the potential to put the Mancos Spur on the map. Literally,” said Meyer. The beauty of resurrecting the spur, whose history dates back to 1973, is that it doesn’t require building any new trails. “We couldn’t ask for anything better,” Meyer said.

On the Mancos end, the spur starts with the Chicken Creek Trail at Mancos State Park/Jackson Lake. From there, Chicken Creek heads north to Transfer Park, where it hooks up with the West Mancos Trail. From there, the West Mancos Trail heads northeast before running into the Sharkstooth Trail, which eventually intersects with the CT near Kennebec. In all, the spur climbs (or descends, depending on your direction) 4,200 feet through rugged aspen, old growth pon-derosa, subalpine and alpine territory, taking in two 12,000-foot passes.

Christopher Bouton, a trails, wilderness and dispersed recreation specialist with the San Juan National Forest, said he is excited about the prospects. “The general public sometimes doesn’t realize there are many miles of underutilized trails in the area,” he said. “It is exciting to be able to partner with the Mancos Trails Group and Mancos State Park to help maintain this trail.”

Although Meyer said the trails group has existed in “one form or another” for about 20 years, new life was breathed into the group in 2012. That was the year the Town of Mancos released its Trails Master Plan, which called for a local trails group to be formed to help implement things. Meyer said since then, the group has gained steam as more people move to town. The idea to shine up the spur arose after a sign from the old spur that read “End of the Colorado Trail” surfaced, and the idea to maintain the spur was added to the master plan.

“We thought, well, this is pretty easy. The trails are done, let’s get in there,” Meyer said.

Over the last two summers, the group has cut back overgrowth and is now working on signage. The signs will contain the heading “Mancos Spur Trail” with the various directions and mileages underneath. Overall, the signage is meant to raise awareness of the existence of the route as well as assist with navigation for current trail users, according to MTG member Jackie Rabb.

“Although this trail exists, many trail users are unaware that it links the two end points due to lack of signage,” she said.

Meyer said for the most part, he envisions the trail as being used by hikers and equestrians (sorry, bikers.) Only 4 miles are designated for motorized use, and the rest, well, it’s a rough, rocky ride, to say the least. (For illustration, please refer to scree photo, opposite page.)

“These three trails are very challenging for cyclists,” said Meyer. “You need to be on your game.”

Which isn’t to say cyclists haven’t been testing their skills out there. In fact, Meyer said he’s seen more and more of them out there recently.

However, he points out, his group’s focus, first and foremost, is on multi-use, nonmotorized use. (Emphasis on hiking.) But it does have an eye toward bike-friendliness, working closely with bike-centric groups like Trails 2000 and Southwest Cycling Association. He said the five-year plan calls for bringing the trails up to contemporary standards. “Many parts of (the trails) are just not sustainable, they’re either old stock or mining routes,” he said.

But more than physical standards, the group is hoping to improve behavioral ones. “One of our big focuses is on trail etiquette,” he said. (Amen.) “We want to set a vibe for everyone to take it down a notch and for everyone to enjoy the trails regardless of how they use them.”

In other words, instead of blazing by the rider on horseback or startled group of hikers, slow down and maybe even stop and say “hello.” (It’s a way more radical idea then, well, being radical.)

“Most people understand their responsibilities. But I think sometimes we get so focused on our personal enjoyment that we forget about other people,” Meyer said. He said when doing trail work or otherwise, he likes to say “hi” to other folks on the trail. “It’s an opportunity to interact and educate,” he said.

And last but not least, Meyer sees the spur as bringing economic revitalization to a town sandwiched by the trail meccas of Durango to the east and Phil’s World to the west. A town that saw one of its main employers, Western Excelsior, go down in flames last year.

“Mancos has one-10th of the population of Durango, so anything we can do to build up our economy is a plus,” he said. “Recreation is the economic future of the West, and Montezuma County is a potential hub. The Mancos Spur trail can be an important spoke in that hub.”

(Other spokes include the Pathways to Mesa Verde trail project, expected to start construction from Mancos next summer, and a 12-mile trail network planned for 800 acres of BLM land west of town.)

As for the locals, well, we’ve never been ones to complain about increased single-track opportunities.

“We want to provide more miles of good, quality trail for everyone,” said Meyer.

For more information on the Mancos Trails Group, go to www.mancostrails.org. 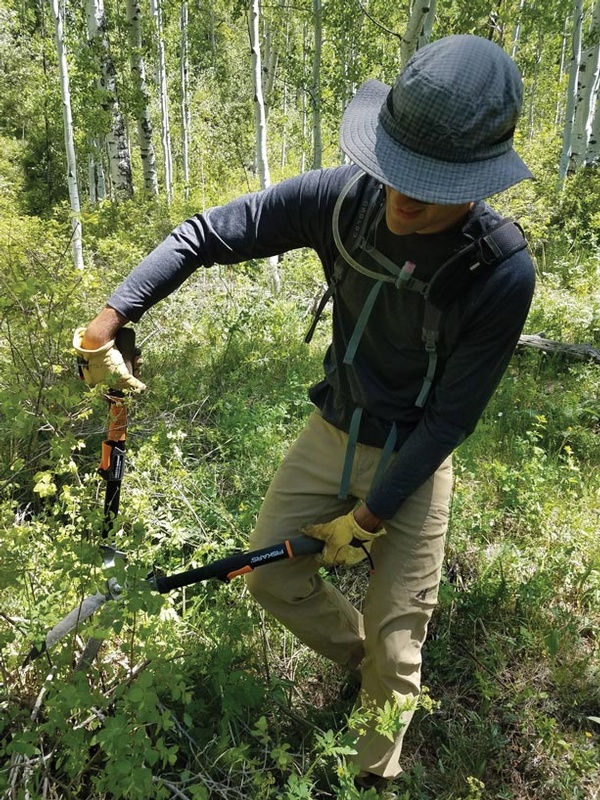 A volunteer tames the brush on the Man- cos Spur to the Colorado Trail earlier this summer./Photo courtesy Robert Meyer.