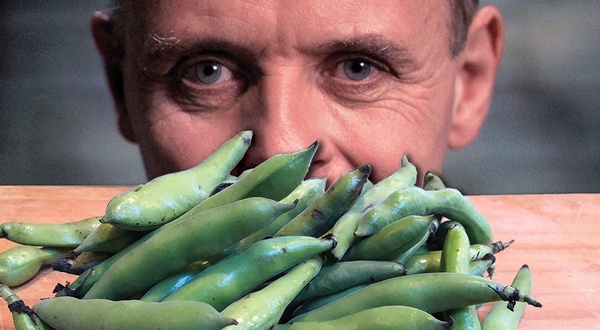 I’m gliding through the Durango Farmers Market, dodging all the double-wide baby strollers, with my eyes peeled for aged black garlic, oxheart carrots, huitlache or corn smut (corn cob fungus aka Mexican truffles), Amarosa fingerlings, French Quarter pink hybrid okra, Kennebec potatoes and Redarlin Brussels sprouts (reddish purple and slightly sweeter than the green variety). No luck. I settle on a small bag of Red German garlic for $7. The October sun has a gloss to it, a glare that makes it kind of hard to see in the shade. I blink twice. But without a doubt, in a small wicker basket, I spy whole fresh fava beans. All over the world, this ancient legume is a savory symbol of spring. It’s a cool weather veggie. Hates the heat. But here it is autumn, and behold! The broad bean!

I dash to the young farmer selling them, and just assume he’s got a bushel hidden beneath the table. I ask for 3 pounds.

“Have you noticed the time? It’s noon! You’re late to the market. I’ll have more next week.”

I quickly purchase the half-pound or so that’s left.

Hail Lord Fava! I can already taste the fresh, nutty flavor, the smooth, buttery texture. Roasted whole with the German garlic, good olive oil and British salt? It’s all a match made in heaven. I eat every bit of them, to the dismay of my husband, who doesn’t even like vegetables.

“Don’t worry,” I tell him. “There will be plenty more next week.”

A species of the flowering plant in the vetch and pea family Fabaceae, vicia faba is the scientific name for the fava bean. Similar to the garden pea, lentil and chickpea, the fava originated in the Mediterranean and southwestern Asia. It seems to have been discovered as far back as the Neolithic period (6,800 – 6,500 B.C.E) from Israel. It became a common food for many Egyptian, Greek and Roman civilizations, its use eventually spreading along the Nile to Ethiopia, northern India and China.

In this country they get a bad rap because you have to peel them twice to get to the bean. (Americans don’t like that.) Which is too bad because favas carry some amazing health benefits – from supporting the immune system and preventing osteoporosis to aiding in heart health and energy levels.

Also known as English beans, broad beans, mojo beans, horse beans, Windsor beans, faba beans, pigeon beans, tic(k) beans, field beans and bell beans, vicia fabas are not only extremely tasty, they are the nutritional all-stars of the legume world. An excellent source of plant protein, fiber, vitamins and minerals, they’re especially high in folate, manganese and iron and provide healthy amounts of thiamine, phosphorus, magnesium, copper, zinc and potassium. Favas are also rich in L-dopa, a substance used to treat Parkinson’s disease. And some use fava beans as a natural alternative to viagra, citing a link between L-dopa production and the human libido.

Adversely, there’s evidence that those with a certain inherited syndrome (glucose-6 phosphate dehydrogenase deficiency) can develop a potentially fatal anemic reaction to favas. (This trait occurs in people mostly of Mediterranean heritage and in Iran and China.)

Another fun fact about favas is that they contain a lot of tyramine, and thus should be avoided by those taking MAOI inhibitors, which are anti-depressants. In the infamous scene in “Silence of the Lambs,” bored with his census taker, Dr. Hannibal Lecter boasts that he ate a man’s liver “with some fava beans and a nice Chianti.” As a psychiatrist, he must have known the three “forbidden foods” for patients taking MAOI inhibitors: liver, favas and wine. Was the doctor inferring that he’d gone off his meds?

As with all ancient foods, favas are waist high in folklore. In ancient Greece, they were used as food for the dead at spring festivals. It was thought that planting them on Good Friday or during the night brought good luck. It was also believed that dreaming of fava beans was a sign of impending conflict; conversely some believed that eating them caused bad dreams. Some cultures used fava beans as a medium for divination, casting them on the ground to interpret the pattern they formed. In Sicily, the fava has special significance because, in the distant past, there was a famine in which all crops failed except fava beans, which saved the population from starvation. In gratitude, thanks were offered up to St. Joseph, which is why favas appear on Sicilian church altars on St. Joseph’s Day. In Rome, on May 1, families traditionally picnic on fresh fava beans with Pecorino Romano during excursions to the Campagna. But up in northern Italy, fava beans have traditionally been fed only to animals; some elders still frown upon human consumption.

Not me. It’s a week later, and I’m back at the Farmer’s Market for the last crop of the Mancos favas. I have a large eco-friendly bag ready to haul them home. It’s 10 o’clock. A lovely morning. I see the sign that says Green Table Farm, and there in the same brown wicker basket are a handful of the beans.

Turns out the farmer, Tyler Hoyt, lives in Mancos, where it’s “so cold I can grow favas through the heat of the summer.”

He planted them in May and June.

To his credit, Hoyt – a native of Boise and a former history major at the Fort, with a master’s degree in agro-ecology – never mentions that he’s the president of the Durango Farmers Market Board (at the tender age of 33). He sells 100 different varieties of about 30 vegetables including some crazy looking carrots and radishes. But it’s the favas that need constant explaining, he says.

“I try to educate people on how use and eat them, beyond the movie reference.”

“People on the Western Slope don’t want to see their water diverted to the Eastern Slope.”

There’s also the problem of methane pollution due to oil and gas drilling in the region. “We have some of the worst air quality in the country, on par with inner-city L.A.”

But I’m hungry and my passion, my fava fever, outstrips his compassion for the Methane Capture Law this morning. Is that wrong? Yes. But I don’t want to be right. Until next year (dear, Tyler) I’ll go for the dried ones at Albertson’s. 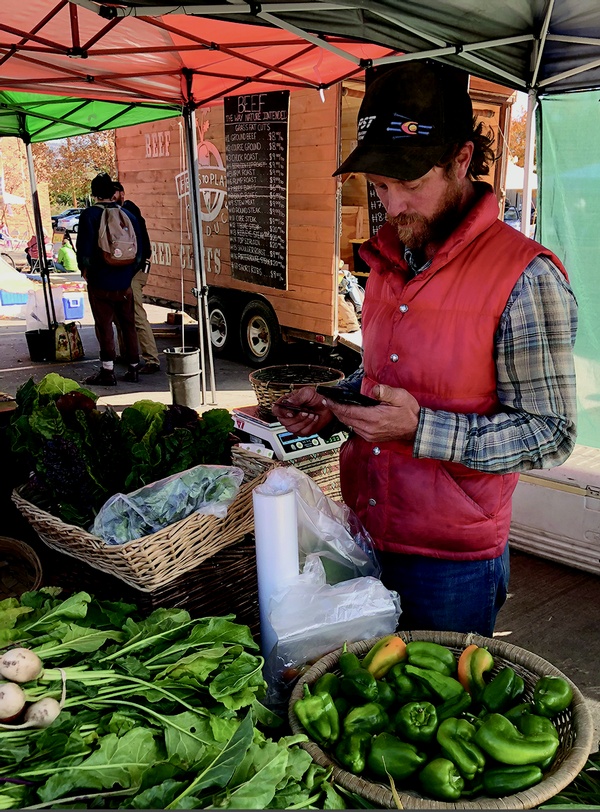 Tyler Hoyt, of Mancos' Green Table Farm, tallies up the total on the last of the year's fresh fava beans. Usually a spring crop, the colder clime in Mancos allows Hoyt to grow them all summer long./ Photo by Donna Hewett