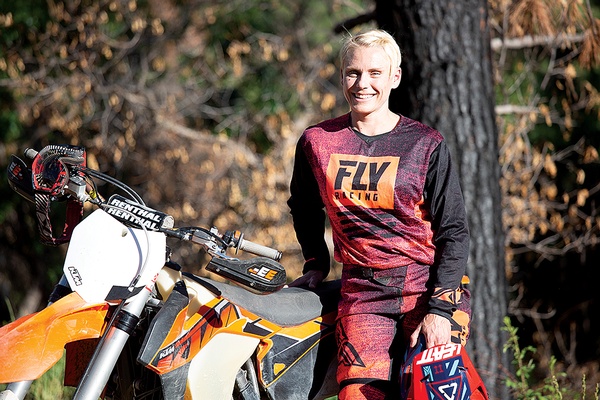 Heather Hormell, president of the San Juan Trail Riders, a local moto advocacy group, poses with her bike near the Hermosa Creek Trail on Tuesday night. In addition to being a lifelong moto-er, Hormell is also a mountain biker and hiker and is trying to combat misconceptions and bridge the gap between the motorized and nonmotorized trail communities./Photo by Jennaye Derge

If you’ve ever seen “The Fast and the Furious” or happened upon a summer X-Games, then you’re likely familiar with the sight of ripping and roaring moto bikes, racing down the track or performing impossible aerial feats. And while this kind of stuff may look good on TV, it’s the exact opposite impression of motos that Heather Hormell wants you to have.

As president of the San Juan Trial Riders, a local OHV (off-highway vehicle) advocacy group, Hormell wants to clear up common misperceptions of motos and help bring riders and the community together.

“SJTR strictly focuses on singletrack riding,” she said. “We are not a group for ATV’s, not for side-by-sides. Our values are in singletrack, to preserve the national forest and maintain the singletrack environment to get into the woods.”

In Hormell’s two-year reign as president of the 21-year-old club, her goal has been to get moto-users honed in on proper trail etiquette in order to maintain integrity and keep public lands pristine and open to everyone. Which is exactly why the group was established in the first place.

San Juan Trail Riders formed in 1998 as the result of a boom in public land recreation that began in the ’60s. It was the heyday of not only free love, but also recreational discovery (the outdoor kind, not the drug kind). The general sense of liberation caused folks to find their vehicle of choice and take to the great outdoors, whether it be on foot, bike or motorcycle. It was fun, it was free ... and then things began to change.

There were a couple of heavy hitters to the moto world between 1970 and the early 2000s. First was the National Environmental Policy Act (NEPA), which gave land-management agencies the ability to oversee environmental impacts on public lands. This paved the way for federal regulations in order to protect those lands. The second was the Forest Service’s 2005 Travel Management Rule, which helped reign in rampant OHV abuse at the behest of public outcry. Basically, the new rule banned motorized vehicles on all trails unless otherwise posted. Up until then it had been the opposite, with all trails open to all users, unless posted.

“NEPA and especially the 2005 Travel Management Rule really put the pressure on our older generation of moto riders who were used to being able to ride on basically any trail they wanted,” said Hormell. “They fueled the start of San Juan Trail Riders because these guys suddenly needed to rally for a voice and fight for their right to use trails.”

As in anywhere, the more traffic a place gets, the more damage it sees, which generally means a rule or two needs to be put in place. It isn’t necessarily a bad thing – in fact, it’s good to protect our outdoor playground, and for Hormell, it makes a lot of sense. Her job as president of SJTR is not only to educate and advocate, but also to help preserve public lands so they can remain open to all free-loving land users down the trail – including moto-ers.

Yes, Hormell, who grew up in Durango riding motos, acknowledges her throttling peers can get a bad rap. Poachers, ruts, dust, noise and trail damage are among the list of complaints she’s heard. She, too, finds herself getting frustrated over moto misuse and abuse.

“It’s especially annoying for me because when I’m out mountain biking or hiking on a nonmotorized trail and I see someone on a moto who isn’t supposed to be there. I know they’re giving us a bad rep,” she said. “But I also know that it’s these people who are giving us a bad name, not the members of the Trail Riders.”

Hormell wants to pass the word that modern, newer bikes don’t throw as much dust or spit out as much exhaust as they once did. She also wants to squash rumors that all motos are causing trail damage and that every rider poaches or goes off trails.

“It’s unfortunate when there are bad apples because we work so hard to keep access open to motorized vehicles,” Hormell said, adding that the group is adamant about adhering to Forest Service rules.

These rules include spark arrestors and riding bikes that are under the 96-decibel noise limit (99 if the bike is manufactured before 1998). In addition, all bikers must have a Colorado permit and abide by proper trail etiquette, such as yielding to hikers, horses and mountain bikers.

To help further their commitment to helping preserve public lands, members’ annual fees go to the Forest Service to help pay for things such as signage and trailhead kiosks. In addition, SJTR members have an agreement with the Forest Service that requires a certain amount of volunteer hours every year be spent clearing and maintaining trails. Most recently, with the help of other groups such as Trails 2000 and Southwest Conservation Corps, San Juan Trail Riders helped clear downed trees from trails in the 416 Fire burn area. The group cleared more than 400 trees on the Jones Creek Trail alone, in addition to dozens more on the Hermosa, Dutch and Pinkerton/Flagstaff trails.

According to Hormell, motos are a valuable partner in trail upkeep because they can reach areas that could otherwise take hours if not days by foot. They can also carry a heavier load than someone hiking or riding a mountain bike.

“The benefit of the motorized group is having the ability to carry the chainsaws farther back than hiking or mountain biking – not that it couldn’t be done,” she said. “It’s just so much easier on a dirt bike.”

Better yet, everyone on San Juan Trail Riders who operates a chainsaw is a C level sawyer, meaning they’ve been trained, approved and certified by the Forest Service to remove downed trees. (*Note: these chainsaws are not used in the wilderness. Motos are not allowed in the wilderness; nor are bikes, for that matter.)

It’s this stewardship and cooperation that Hormell hopes will keep the SJTR in good graces with the Forest Service and the community for generations to come.

“I want the group to continue to be an advocate for motorized use in public lands but also an advocate for family recreation – for people to get together and have fun,” she said. “It’s more important now than ever to advocate for the well-being that comes from unplugging from our hectic lives and having that ability to not only recreate, but connect with each other and as a community as well.” 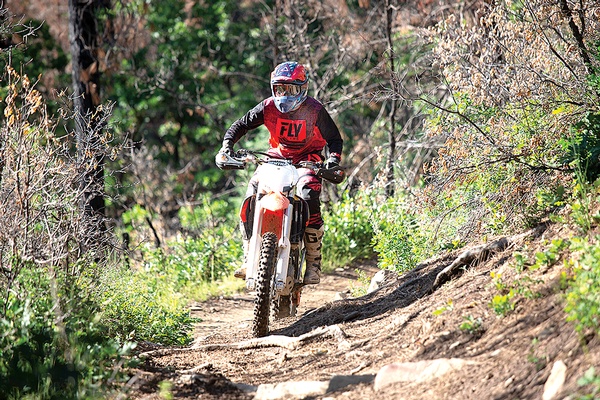 Hormell on the Hermosa Creek Trail. The San Juan Trail Riders recently worked with other groups to clear more than 400 downed trees from the area as a result of the 416 Fire. The group also works to make sure all members abide by Forest Service regulations and trail etiquette./Photo by Jennaye Derge