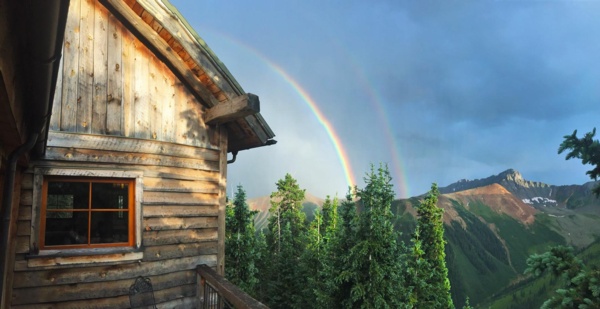 I’m addicted to the San Juan Mountains. Can’t get enough of their jagged peaks, wildflower-bedecked meadows, snow-laden couloirs and jewel-toned lakes. They’re the most beautiful mountains in the world, and they’ve turned me into a pusher.

When my dad asked if I wanted to take a summer weekend trip with him, of course I said yes. He said, “Anywhere you want to go.”

So I said, “Can we go to the OPUS Hut?” I batted my eyes, a trick that’s worked flawlessly for 32 years.

So we booked a mid-July night at the OPUS.

My dad, Randy, prefers hotels, fine dining and golf, so I thought OPUS provided a good compromise: comfortable amenities, tasty cuisine and the perfect balance of adventure and relaxation.

Randy’s no stranger to Colorado, mind you. He owns 40 acres in La Plata Canyon and is a 1982 graduate of the University of Colorado at Boulder. At the age of 22, he founded his own financial planning firm. But little do his clients know that Randy missed a lot of school his freshman year, finishing with a C average because he skied his face off.

So he gets it. He’s not into backpacking or sleeping on the ground or eating Indian food from a packet, but the man loves the alpine. And the OPUS is alpine, tucked in a postcard-perfect landscape that invokes even the most stoic of souls to twirl in careless bliss to the sound of music and marmots.

My initial plan was to hike over from Telluride in the early morning. From there, it’s a 12-mile one-way trek with roughly 3,500-feet of elevation gain over faded mining and game trails through a smorgasbord of San Juan majesty. Unmarked on popular maps, a topo is available at opushut.com.

But after scouting the route, which was still quite snowy, I called an audible. Instead, we opted for the pavement route, with a much shorter and more manageable sidetrip to Ice Lakes Basin.

We had the whole basin to ourselves, all alone except for Ulysses S. Grant Peak and a million flies. We returned to the 4Runner for cold drinks and the 45-minute drive down the South Fork of Mineral Creek, down to Highway 500 and north to Ophir Pass Road. Also known as San Juan CR 8, the road is closed in winter, but in the summer, travelers can drive within a quarter mile of the hut. (In winter it is a relatively short but committing 3.5 miles from 550.)

More popular as a backcountry ski destination, OPUS stands for “Ophir Pass Ultimate Ski.” We parked in the dirt lot a half mile east of Ophir Pass and packed up sleeping bag liners, headlamps, towels and bathing suits for the sauna. From here, a quarter-mile trail leads to the hut nestled at a lofty 11,000 feet.

An excited border collie named Ronja and her owner, Bob Kingsley, met us at the door. Soft spoken with a wild tuft of hair crowning his head, Bob introduced himself as we removed our shoes in the cozy entryway. He said we were the only ones booked for that evening, so choose whatever room we’d like. Feather duvets and running water included.

Alcoholic beverages are not included, and you can’t bring your own, but prices for wine and beer are reasonable. (Bear in mind, there is nothing worse than lugging a bag of wine and a rack of PBR on your back uphill in the wintertime.) The libation selection, like everything else at the hut, is European: slight but intentional. Empty bottles line the rafters, indicating good times, and a stocked liquor cabinet promises many more to come.

Randy’s not a big drinker, but he was pretty excited about a glass of wine while we watched the sunset.

“I only have Burgundy,” said Bob.

As the sun slipped behind the pines and a breeze pulled clouds over the peaks above Paradise Basin, we made ourselves comfortable on Bob’s carefully crafted deck. Bob brought out deep glasses of wine and full bowls of lentil soup. The alpenglow show continued, with golden, rose and crimson dustings on the iron-rich avalanche paths across the way.

At our curious prodding, Bob told us the history of the OPUS, which was masterfully hewed from a reclaimed Wisconsin dairy barn. A timber framer and carpenter by trade, Bob has built from the ground up a work of art without a lazy stitch in the entire chalet. After acquiring the land claim in 2003, he started framing in 2006 and opened for business in 2011.

“There’s a lot of sweat involved,” says Bob, a 50-year-old native New Yorker and Colorado State graduate. “It took about $250,000 to build, even with salvaged materials saved from other jobs.”

Besides being stunning, the OPUS Hut also boasts a zero-carbon footprint and is entirely off-the-grid with solar electricity, rainwater catchments, compost toilets and wood stoves. Cell service is surprisingly good, too, but no one busies themselves with technology while they’re here. Rather, there are maps to pour over, chess boards to strategize and stories to recap.

“People are blown away by how comfortable it is and the intimacy of it all,” says Bob, guessing there were 5,000 OPUS guests in 2015. “Indoor bathrooms are a big selling point for Americans, too.”

Bob says visitors vary from “intense athletes to families to stoner vacations, you know, folks who come up to chill out, knock it back a couple of notches, and stare at the mountain wilderness.”

“I’d really like to get more kids educational groups,” says Bob. “It’s good for them to be informed in the high country.”

His favorite season for OPUS? “Fall is damn special,” says Bob, who lives in nearby Ophir. “Maybe it’s the anticipation of ski season ... it’s a magical time of year. And the flies go away.”

Just as Randy and I started joking that we could crush a pizza, Bob announced dinner. Curry vegetables and chicken, basmati rice and a fresh salad – nary an Indian packet of food in sight. For dessert, Bob presented a homemade chocolate granola bar. We took a couple of squares and headed off to change for the sauna that Bob had built just down the hill.

The sauna venture lasted maybe three minutes. Randy hates hot, enclosed spaces. It’s too much like summer in Phoenix. Besides, we decided that 8 p.m. was a plenty reasonable bedtime.

After a peaceful night, we awoke to the smell of coffee and bacon wafting through the hardwood floors. Bob had also made banana bread and oats spiced with nutmeg. Randy loves banana bread. I don’t, but Bob doesn’t have to know that.

Breakfasted, we greeted the morning with a short hike to Ruby Lake. I took an alpine plunge and begged Randy to join, but even batting my eyes couldn’t get him in the frigid water. I didn’t care. Randy had drunk the San Juan Kool-Aid, and while he didn’t twirl or reference Julie Andrews (he’s more of an Olivia Newton John kind of guy), he did say “wow” a lot, breathless from the beauty and altitude, officially hooked on my drug of choice. Sucker. 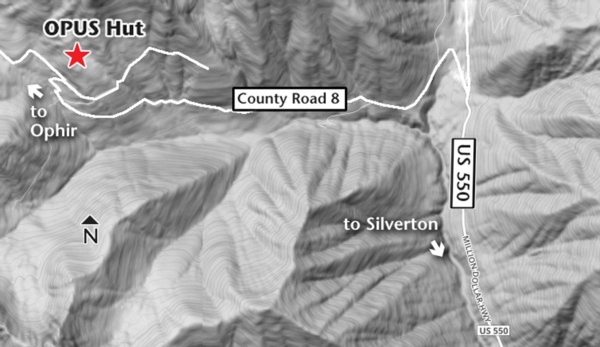