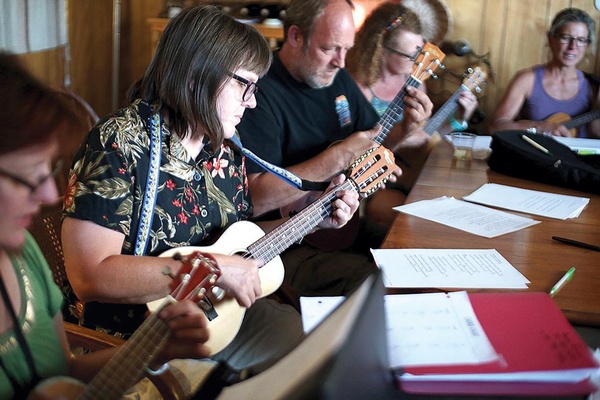 Rocking out at the Durango Uke Circle. Denise Leslie started the monthly jams a few years ago./Photo by Jennaye Derge

There was a time when the sound of a ukulele conjured images of hula skirts, lei necklaces, tropical breezes and swaying hips. Although that may still hold true, the ukulele has left the islands and entered the mainstream, where it has gained a world-wide fan base over the last several decades. People of all ages play the diminutive four-stringed instrument. There are literally scores of festivals held annually around the world; with at least 40 in the continental United States. And one of those is right here in our own mountain hamlet.

This weekend, the Rocky Mountain UkeFest returns to Durango, July 7-9. The third annual, this year’s festival is expected to attract strummers from near and far, including a few well-respected practitioners.

Fort Lewis College will be the new home for this year’s event, a venue that thrills UkeFest Founder/Director Denise Leslie. “The campus and theater will be a great setting for ukulele workshops and live concerts,” she said.

A reception and ukulele jam session kicks things off Friday night at 5:30 p.m. at the Rochester Hotel’s “Secret Garden.” It will be followed by an open mic ukulele night from 8:30 – 10 p.m. at the Animas City Theater.

Historically, the ukulele originated in the 19th century as a Hawaiian adaptation of the Portuguese machete, which was based on an instrument called the braguinha, first brought to the islands by migrating sailors. The Hawaiian iteration eventually made its way back to Europe and then to America, where it became fashionable in the 1920s and again in the 1950s. As instruments go, it is relatively inexpensive, lightweight and arguably easy to learn, therefore attracting a vast number of enthusiasts. Groups of all ages gather to jam as much for the social experience as the pure musical enjoyment.

Among the prominent performers and instructors lined up for the weekend is presenter Kevin Carroll, a singer-songwriter, performer and educator from Austin, Texas. In addition, the fest will feature the well-known New Zealand duo of Mark Jackson and Jane Jelbart, known among the cognoscenti as “Jack ’n Jel,” who will lead the festival’s “ukeorchestra” programs. Also highly anticipated is Devin Scott, a performer who

will also serve as the open mic host and uke jam leader. Scott bought his first ukulele just a few years ago and it wasn’t long before he began performing at local open mic nights around his hometown in Missouri. One of his favorite things to do, however, is to teach ukulele and lead jam sessions.

“It’s so amazing to watch an entire group of people enjoy something so much together,” he reflected. His repertoire is broad and ranges from Patsy Cline’s country classics to the vintage soul music of R. Kelly. “It’s just more fun when people are enjoying and participating,” he explains, “so I try to make sure that everyone has something they can sing along to.”

Locals may be familiar with Scott because he plays regularly at Grassburger, Four Leaves Winery, Trimble Hot Springs and even leads an annual ukulele jam down the San Juan River.

For Leslie, her love of the ukulele was born of a lifelong love of music. “As a little girl, I always wanted to be a music teacher,” she said. “I played piano, guitar, sang in barbershop quartets, choirs; music was always a part of me growing up in small town Indiana.”

Later on, she began a career in the marketing of concerts, “Everything from stadium tours with rock and roll to country music artists, even WWF wrestling, Ringling Brothers Circus, Disney on Ice, rodeos, and basketball,” she enthused. But ironically, playing music herself took a backseat to her career.

After moving to Durango with her husband, FLC Community Concert Hall Director Charles Leslie, she worked in marketing at Music in the Mountains and also started the Southwest Arts Program before taking over Arts Perspective magazine. “What was missing this whole time,” she admits, “was involving music in my life.”

She recalls distributing her magazine around Durango one day and stopping at Canyon Music on E. Second Avenue, where she saw guitars, mandolins and banjos. She remembers thinking she needed to get back to making music but realized that the price of instruments might be a deterrent until the salesperson asked if she ever considered a ukulele. She walked out the door with a $150 ukulele and a mission to start playing music again.

After attending her first ukulele festival in Reno in 2014 and finding more than 300 ukulele players in attendance, she was completely hooked.

Soon, when people in Durango found out she played ukulele, they would ask her to teach them. “I decided to send an email out to all the gals I had met over the past few years and invited them to an evening to learn to play the ukulele,” she recalled.

According to Leslie, 25 women and one man showed up to what became the “Durango Uke Circle.” Today, a group of about 20 regulars meet at the Smiley Building once a month to play ukulele together.

Having a background in event production, it was only natural she went one step further to launch the Rocky Mountain UkeFest three years ago.

The resulting mix of programs, performances and jam sessions proved so popular, the number of registrants doubled in the festival’s second year. Nevertheless, she remains resolute about limiting the number of participants in classes and workshops for maximum learning and enjoyment. (However, all the “open” events are open to anyone, and the more the merrier, she says.)

The workshops cover skill levels from beginner to advanced and include a range of subjects such as: Making Music; Soulful Uke Jam; Ukestration; Improvisation; Blues Ukulele Basics; and the playful Uke Ellington C Jam Blues.

So Durango, say “aloha!” to the Rocky Mountain UkeFest and get into the swing, sway, strumming and sheer enjoyment of this humble instrument.

For a complete schedule of events, or to register or buy tickets go to: www.rockymountainukefest.com. In some instances tickets will be available at the door, but space is limited. 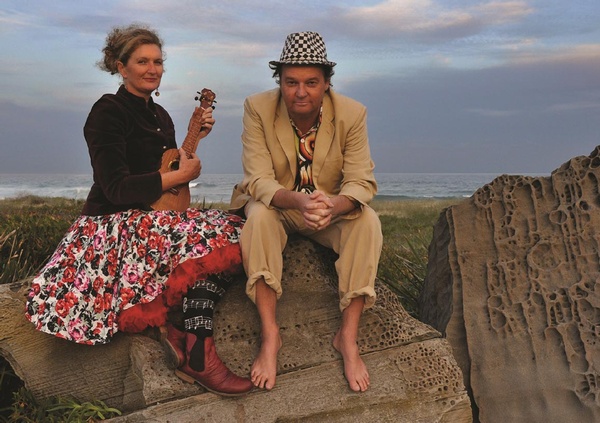 Where: Opening reception at Rochester Hotel; classes and workshops at Fort Lewis College