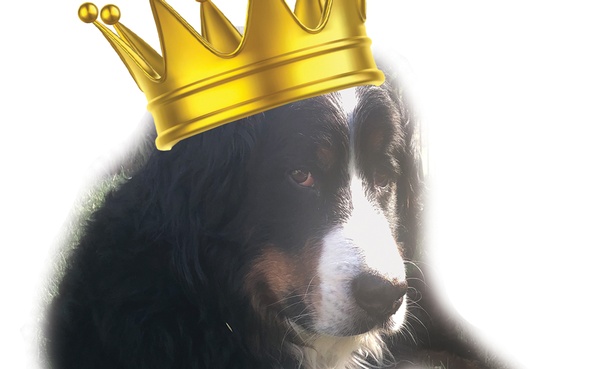 We have a 9-year-old Bernese Mountain Dog. That puts him one year past his warranty date. So kinda like Meghan, Duchess of Sussex, what Truman wants, Truman gets.

The trouble is that in our current lockdown, Truman has become over-indulged, if that’s even possible. Being so cossetted and adored during these long days has turned our sweet, easy-going porch dog into a tyrannical beast. So much so that when I discover his favorite treats have disappeared from the shelves of Walmart, panic swoops in. I’m stuck with the dreaded Ol’ Roy tri-flavored kabobs.

As soon as I walk in the door, he senses my anxiety. A worried look crosses his regal face as I unpack the white-trash version of dog chews. I place one before him. He doesn’t even look at it.

“Come on, Tru-Tru, they’re really just the same as the Good ’n’ Funs. Look – it says right here – made with real chicken, chicken liver and duck. All your favorites!”

Several pandemic puppies have arrived in the neighborhood over the recent months. As a result, Truman’s developed a howl. And it’s LOUD. He rolls his head back and let’s it rip – fully sustained. Doleful.

“One in five CHILDREN are going hungry every day,” I tell him. “Times have changed, Truman. You’re being selfish! I shouldn’t even be buying you this shit.”

He gives me a go-to-hell look and disappears into the back bedroom, where of course, he sleeps with me. We’re as close as well, a couple. He generally gets more attention than my dear husband. And that’s not good. Not good at all.

How did I become so devoted to a big, overbred dog, when technically I’m a cat person? How did his every little wish become my sweaty command? I suppose it has something to do with his complete and unconditional love.

Mitochondrial DNA research suggests most domesticated dogs have been genetically separate from wolves for at least 100,000 years. And in that time, canines have always shared a special bond with humans. They’ve acted as human alarm systems, trackers, hunting aids, garbage disposals, hot water bottles, children’s guardians and playmates. We give them food and security, and in return, dogs give us tons of affection, which made us feel less alone. It’s been a long-lasting symbiosis. In fact, some say that the success of our species is partly due to help from dogs.

And it must be why I feel such guilt for getting Truman addicted to those trashy treats. Despite their size, Berners can be as finicky as a feline. The expensive kabobs are one of the few things he actually eats. Of course, this is all my fault. Maybe I can find a solution, or at least solace, in the history books, i.e., the internet.

For our primordial pets, hunting, killing and consuming live prey was an option for the able-bodied. Those less proficient (read lazy), scavenged the plains for carcasses, vegetation and eggs. Unlike cats, dogs are omnivorous, meaning that they can literally survive off any kind of garbage they scratch up.

If a hungry canine found an ordinary household to work and dwell in during the Middle Ages (and up until the mid-19th century), little consideration was given to feeding it. A dog’s diet was the same as its owner, eating whatever it could scrounge up, like bare knuckle bones, limp cabbage shreds, rotten potatoes, onions and crusts of bread. The lucky farm dogs in the early 1800s were fed lard and grains to keep them healthy enough to perform their jobs like a professional.

Conversely, the wealthy have always plied their pets with special foods, better than most human diets. Empress Tzu His, of China, fed her Pekingese antelope milk, quail breasts and shark fins. Dogs of European nobility were fed candy, liquor, roast duck, cake and always a raw chunk of the hunt.

It was the Victorians, however, who saw their own cultural values reflected in the dog: both were steadfast, loyal, plucky and courageous. Attitudes changed toward domesticated animals, from the hard school of earn-your-keep-or-you’ll-be-eaten, to a deeply emotional investment. Queen Victoria herself had a mutt named Sharp.

Moving on to the modern ages, middle class folks with disposable incomes chose dogs and cats as cuddly companions. They viewed their “pets” not only as prime members of the family but luxury items, status symbols.

Because pets were viewed as investments, a trend for more scrutiny of their food hastened “experts” borne out of nowhere, who gave worldly advice on dog diets. The common thinking of the day was that dogs needed to become more “civilized.” A strong preference for cooked meat, as opposed to the sloppy raw stuff, became the norm.

Enter Spratt’s Dog Cakes. Similar to dry tack or ship biscuits, they were made of vegetables, beet root and wheat mixed with beef blood. Sold to English country gentlemen for their sporting dogs, the convenient biscuit was also successfully marketed to urban dog owners in New York. Other companies began to develop their own recipes for biscuits and dry kibble using the nutritional knowledge of the time, thus giving rise to the American pet food industry.

Ken-L-Ration, the first canned dog food on the market, was introduced in 1922. It was made of horse meat, of course, and dogs devoured it. The inventors went to great extent to advertise their product on popular radio shows such as “The Adventures of Rin Tin Tin.” It became so popular that the company started breeding horses just so they could meet consumers’ growing demand. The practice was acceptable until after WWII, when horses became pets, too.

In the 1950s, pet food makers tried to convince dog owners to only feed their pets packaged dog food. Sponsored reports in magazines and newspapers talked about the dangers of feeding dogs table scraps and raw meat. Their aggressive marketing and advertising changed the course of history.

It wasn’t until 2006 that dog food had to be “complete and balanced.” Which didn’t deter dog food manufacturers from glopping chemical preservatives, artificial color, meat meal, gluten, corn syrup, propylene glycol, etc., into their product. The new malady for pet owners today is the quest for the perfect list of ingredients while paying through the nose for them.

Enter Australian vet and author Ian Billinghurst. In his 1993 book, Give Your Dog a Bone, he coined the acronym “BARF” (bones and raw food, or biologically appropriate raw food). The term was predicated on the belief that adult dogs thrive on an “evolutionary” diet based on what canines ate before they became domesticated.

This diet typically consists of muscle meat, often still on the bone; organ meats such as liver and kidney; (cooked) vegetables like broccoli, spinach and celery; fruit; and yogurt.

The results? Supposedly smaller stools, more energy, shinier coats and better breath. The risks? If you don’t clean up the raw food remains properly (duh) bacteria could spread. And the diet may not provide enough vitamins and minerals.

At this time of the Holocene, when dogs wear undies and go for stroller walks, a raw food diet can actually be thought of as controversial, or better yet, the ultimate in pet pampering. It’s a diet that conveniently matches our own Keto lifestyle. (If you don’t have the stomach to butcher meat yourself, you can, of course, buy it on Amazon.)

I decide to try it on Truman. On impulse, I mix a few spoonfuls of raw hamburger into his kibble and carefully place the dish before him. He stares up at the me with repulsion. A full-blown COVID-19 induced doggy depression has settled in. His eyes cry: Why are you guys here all the effing time, and I still don’t get what I want?

I wring my poor, over-sanitized hands. What to do? As always, and as convenient of softened butter, I scrap the raw idea and Google homemade pet food. Making homemade pet food doesn’t fit everyone’s lifestyle, but these days it could. I give it a go: ground turkey, eggs, cooked rice, plus a carrot and one apple (diced), hand blended, put in a greased muffin tin and baked 30 minutes. I leave the doggie muffins to cool on the stove. The good smell brings Truman trotting out of hiding. His tail is wagging! He gobbles one down, then three more. Good boy!

As we happily prepare for a walk, I notice my husband in the kitchen polishing off one of the dog cakes.

“You’re eating dog food,” I holler at him.

He calmly wipes his lips on a valued paper towel.

“That I cooked for Truman,” I continue.

“Oh. That explains why these taste like they came from a three-star establishment. What’s for my dinner?” I wring my hands.

“Do you mind the pepperoni pizza tots again?” 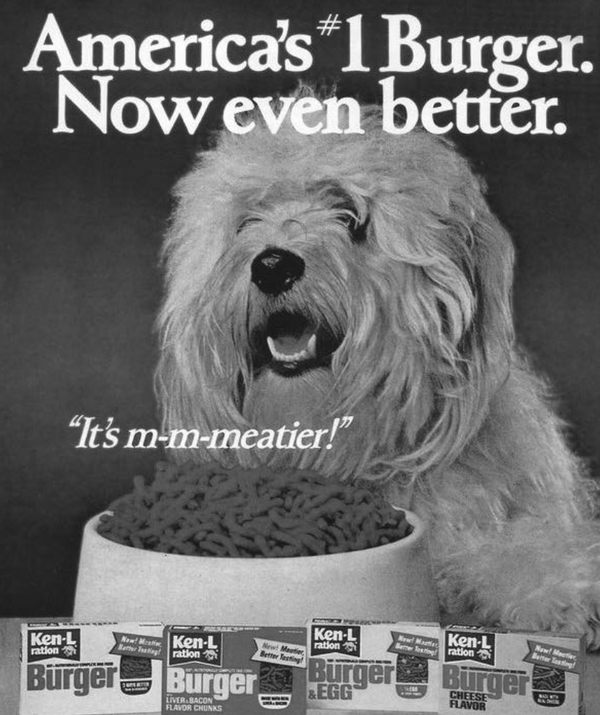 Although ubiquitous in American culture, manufactured dog food is a relatively new phenomenon in domesticated dogs' 100,000 year history. The first to come along was Spratt's in the early 1900s, followed by Ken-L-Ration in 1922. The first Ken-L-Ration was made with horse meat, a fact that was openly – and perhaps regrettably – touted.