Staying alive
Livestreaming, Rolling Revues and other tricks in the pandemic musician's 'toolbag' 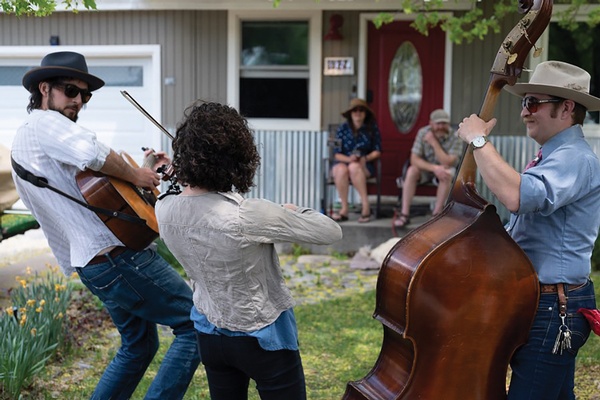 The Stillhouse Junkies on one of their impromptu "Rolling Revue" performances. When a tour in England as well as a summer on the festival circuit evaporated because of the pandemic, the trio began offering frontyard and driveway concerts via its social media as a way to keep playing. "We were feeling pretty depressed that we weren't playing much," lead vocalist Fred Kozak said. "The Rolling Revue was a way to pivot to something else."/Courtesy photo

Chris Aaland - 07/23/2020
Back in before times, I’d stare at the clock on Friday afternoons wondering when it would be appropriate to ditch work and head to the bar. Usually, the yearnings started around 3 p.m. By 4, I’d be barreling down the road. In the summer, that meant meeting my buddies at The Balcony to slam a few happy hour pints and watch a local band.
In this new normal – at least for most of my friends and me – these chances are few and far between. Call me a sheep or a snowflake, but I’m holed up in the house. While it’s a bummer to those of us hankering for a cold one with our pals, it’s financially devastating for bands that have lost gigs. It also takes away their best chance to sell CDs, T-shirts, koozies and other merchandise.
More than a half-dozen local artists have released full-length albums or CDs during the pandemic or the months leading up to it. Sales, other than donations to crowdsourcing to help with production costs, are few and far between.
Durango singer/songwriter Caitlin Cannon recently moved to Nashville part-time seeking a real music career. Over the past eight years prior to that, she fronted local groups like Caitlin Cannon & the Artillery and The Cannondolls, playing smaller local venues and street festivals while sporadically releasing recordings with her bands. The move to Nashville meant recruiting a group of seasoned veterans to record with, hiring a producer and even seeking management to handle publicity and bookings.
“My whole life was going to change,” Cannon told me last week. “And then it didn’t change at all, which is so sad. I was really upset because I had invested a lot of energy into my release cycle. Everybody was pulling their releases because they have teams of people helping them strategize how to be successful. The only way artists can make money off their albums is touring.”
The Huntsville, Ala., native had completed a record called “The TrashCannon Album,” which had been pushed back due to a variety of reasons. Instead of releasing it, she began releasing singles, some with professionally produced videos. She attended the Americana Music Association convention in Nashville last fall, making professional connections that could advance her career. One of those contacts was Denis Grabill, owner and booking agent for Black Oak Artists, which has a roster of more than 25 up-and-coming country and Americana acts. He quickly signed Cannon to Black Oak.
“Denis has been around to give me advice when I needed it, like starting this weekly livestream called ‘Married to Monday,’” she said. “We’re getting creative about how we’re going to do things when they open up.” One piece of advice was to release a few advance singles like “Toolbag” and “Deliver.”

Ride a raft with old Huck Finn? Email me at chrisa@gobrainstorm.net.