Still kicking up their heels
Haters say telemarking's dead. Just don't tell that to all its old (and new) adherents 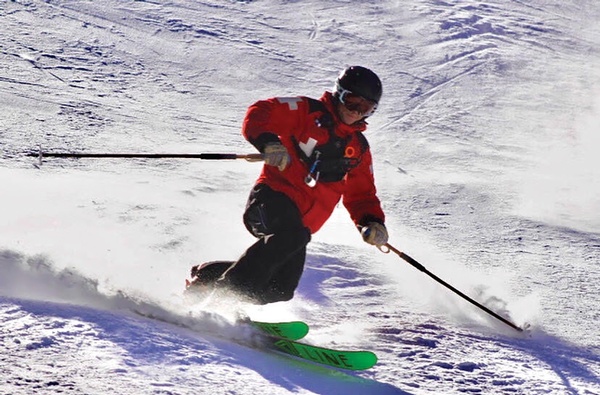 Dylan Meshew drops the knee while on duty recently. "When I was 9 or 10 years old, I decided that I was bored with alpine skiing," the 22-year-old Purg patroller said. He paid his dues on leather boots with plastic cuffs and three pins but stuck with it, adding, "I haven't locked my heel down since about 2012."/Courtesy photo

It appears the reports of telemarking’s death have been greatly exaggerated.

Announced in a May 2017 feature in Powder magazine titled “Telemark Skiing is Dead” (and, perhaps to drive the stake deeper into its heart, subtitled, “The last story about telemark skiing, ever”), the article cited crashing interest in gear sales in the 2010s as a sign of the sports’ imminent demise.

It attributed the passing of the 19th-century way to turn skis down a mountain, which had experienced a booming rebirth in the 1980s and ‘90s, to the sports’ “scruffy underground cool” going out of fashion. Noting that in 2017 there were no tele-focused ski makers and few boot manufacturers, the article concluded, “There are still a few thousand telemarkers in America, but that number probably won’t ever increase.”

Here in 2020, though, Matt Chmielarczyk sees it differently.

Chmielarczyk is owner of Mountain Chalet, a backcountry mountaineering and ski shop based in Colorado Springs since 1968. In February, he was at Purgatory Resort for the Telemarking Festival, a partnership between Mountain Chalet and Durango’s Backcountry Experience. At the day-long event, the two shops offered free demos of the latest telemark gear, lessons, education, beacon and backcountry skills workshops, group ski runs and an après-ski party.

“Telemarking’s on an upswing,” he says. “People had written it off for a long time, and just a few years ago really prominent brands and shops weren’t providing gear to telemark skiers anymore. Now, though, people are really embracing the new NTN-style of boots and bindings.”

While plastic replaced leather telemark boots decades ago, NTN – “New Telemark Normal” – is a new technology of step-in/step-out boots and bindings that is easier to use and provides skiers more powerful control than the traditional duckbill boots and “three pin” bindings that drove the last resurgence of the sport.

“Telemarking was huge up to about 10 years ago, and then it just kind of it kind of faded away,” Ben Rockis, owner of Backcountry Experience, says. “But the resurgence over the past couple of years is growing and growing. With the new technology, the new binding setups and a new commitment from vendors, it’s coming back.”

A telemarker himself for nearly 30 years, Rockis argues that it’s not the “scruffy underground cool” that is driving the sports’ new growth. He instead attributes it to the telemark turn itself.

“The grace of the telemark turn is almost like a religion,” he muses. “It’s this deep feeling of dancing on the mountain. A lot of people don’t get it, but once you feel that vibration in your body, it’s just an amazing experience.”

Chmielarczyk agrees that the combination of the unique skiing experience with better equipment is what’s bringing a new generation of telemarkers into his store. It’s also what inspired him to spread that joy through the traveling Telemarking Festival, now in its fourth year, with stops in Monarch and Taos this season. Next year they aim to add up to three more venues.

“A lot of young skiers, especially in Colorado, have been skiing or boarding since they were little, and they want to change it up a bit,” he says. “The young people coming from the park-skiing and the free-ride worlds are embracing the telemark turn because it adds to the challenge.”

That was Dylan Meshew’s experience. Meshew is a 22-year-old ski patroller at Purgatory and a telemarker, both on and off the job. “When I was 9 or 10 years old, I decided that I was bored with alpine skiing,” he recounts. “So I told my dad, hey, I want to try snowboarding. He said no, but that he had something else he wanted me to try.”

He started out on some of his father’s plastic-cuffed leather boots and narrow skis, but struggled with that gear. “But I stuck with it because it was a huge challenge for me,” he says. “Then, through the years, I’ve been progressing by improving the gear that I have. I haven’t locked my heel down since about 2012.”

Perhaps surprisingly, since joining Purgatory Mountain Patrol two years ago, Meshew has also found his telemark equipment to be an advantage in the job’s duties and demands.

“I can maneuver a lot easier,” he explains. “For certain end-of-day sweeps we have to cut back and forth across runs, and I can just tour across the cutbacks if I need to. And it’s a lot easier helping people put their skis back on. That maneuverability is also key pulling a toboggan because I can use a mix of walking and skating that gives me an edge over alpine skis or a snowboard.”

While Meshew agrees that improved equipment has helped his generation give telemarking a try, he thinks other technologies that didn’t exist during the sports’ last upsurge in popularity are also playing a role.

“It’s partially the gear, but it’s also the exposure, especially through social media,” he says. “There are a lot of people switching over because of things they’ve seen on Instagram and Facebook and YouTube. I’ve even noticed a lot of the little rippers at competitions starting to do those events on telemarks.”

Still, it’s not just for the young. Especially here in Southwestern Colorado, where telemarking retained a dedicated following through the national marketplace slump in the 2010s. That old way of turning still remains a sacred experience among those who converted to the “religion” a long time ago.

Ayla Moore was a latecomer to the sport, launching her telemarking career at age 30. “I tried alpine skiing once and found it deadly boring,” she remembers. “When my husband and I moved to Durango in 1995, it was here in this crazy town that I took up tele-ing, because that’s what these crazy people were into.”

Now, 25 years later, the mother of two alpine skiers is still dropping her knee and lifting her heel in her mid-50s, because of what she calls “those surfy, flowy turns.”

“I love it,” she says. “I love the strength it takes to basically do lunges all the way down a mountain. I love how I can skate-ski on the flats. I love feeling that free heel and being slightly untethered. Who knows how long I will last at this, but for now, it’s suffering and smiling all the way down the mountain. And then a lot of exhausted sitting on the sofa for the rest of the day.” 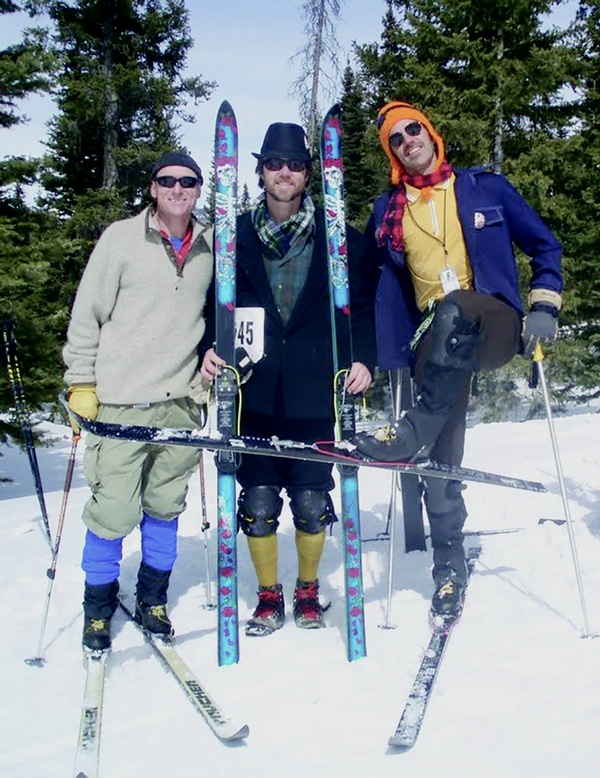 The author (left) in full regalia with cohorts during a recent Tele Fest./Photos by Ken Wright 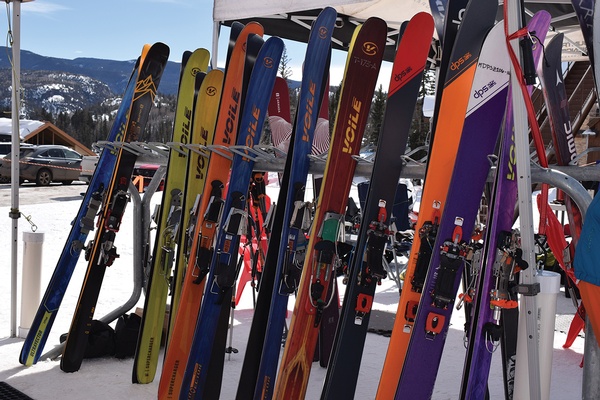 Tele demos line the racks at Purgatory during February’s Tele Fest. Co-sponsored by Backcountry Experience and Colorado Springs-based Mountain Chalet, the event drew a crowd of diehards as well as young’uns eager for a new challenge.