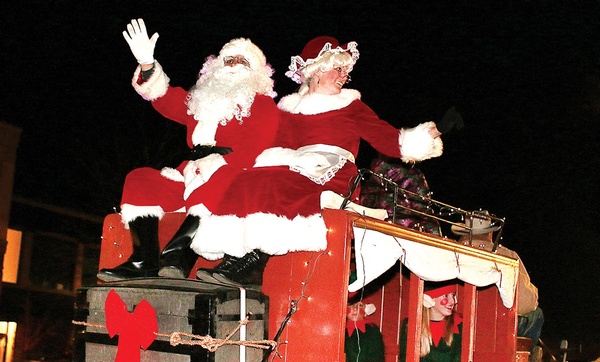 Mr. and Mrs. Claus ride in their sleigh right down Main Avenue, singing with other Durangoans toward Buckley Park for the annual tree lighting ceremony. The secret identity of the dedicated pair is a well- kept secret in this small town./Photo by Jennaye Derge

Secrets are hard to keep. They want out. They make you feel special, like a select member of some salacious club. They’re tangible, alive and make your brain itch as they try to wiggle free into conversations. And I have one hell of a secret. Actually, it’s probably the third biggest secret of all time according to my personal ranking: 1.) The truth about alien en- counters. 2.) The reason Trump’s only expression is a man-pout. 3.) Mr. and Mrs. Claus’ true identities.

Isn’t that awesome? I know the man behind the beard, the woman behind the smile: I know Mr. and Mrs. Claus, who we follow every year riding in their sleigh right down Main Avenue, as we sing our way to Buckley Park. It’s like I’m part of Gotham’s citizenry and I just figured out the connection between Bruce and Batman. That kind of secret gives you power, and the frustration is palpable because I have to keep my mouth shut (Mrs. Claus would’ve let me tell you, but Mr. Claus takes his job seriously). But there’s no reason I can’t share a story or two about my fairytale friends, because right now, I feel like that’s something we all need.

I met the Clauses on a triple date about a year ago at a local sushi shop, and when they’re in disguise, they just like the rest of Durango’s population: thirtysomethings, rugged and happy, comfortable and smart. Of course, they didn’t introduce themselves as the Clauses because that would’ve been weird. They used aliases. This is where things get tricky because quite a few of you could figure out who I was talking about if I dropped their January-through-November-names, so I’ll make something up... from now on, I’ll refer to Santa as “Edwardo Pimperton” and to Mrs. Claus as “Michele.” As a side note, how sexist is it that Mrs. Claus doesn’t have a first name? Strange...

About halfway through appetizers, I realized Edwardo Pimperton had the type of voice that carried. And I don’t mean that it was loud, per se; his voice had a baritone resonance that could cut through a room as it reverberated through the walls – it was far more than “merry.” I complimented the manliness inherent to such a voice because I’m a tad socially awkward, and then Michele said something like “I know, right? Edwardo’s loud voice is the reason he makes such a good Santa.” And then Edwardo was all like “do you want to hear it?” Of course, I had no idea what “it” was, but I said yes. Edwardo smiled, and then he belted out a classically genuine “HO HO HO!” as he waved to an imaginary crowd. It. Was. Awesome. You don’t truly know what Santa sounds like until you hear Santa say HO HO HO in a sushi shop. It was as if all the mall and movie Santa Clauses got together and spoke out in unison, their voices melding together into a singular holiday spirit (I’m embellishing, but that’s what the holidays are about, so you’ll have to excuse me).

Michele and Edwardo Pimperton told me their secret, that they were the Clauses, and they told me what it was like. Haven’t you always wondered? If you sat across from Santa separated only by a half-eaten bowl of edamame, wouldn’t your first question be “what’s it like?” Well here’s your peek behind the sleigh: it’s wonderful. You’re the center of a happy mob, everyone is willing you to be the real Santa. The kids look at you with reverence.

For Mrs. Claus, whose real-life smile turns strangers into friends, the older children keep their distance at first but then the magic breaks them and they come in for a hug or a candy cane. It’s all smiles and laughter and standing close to other people: these are the things that heal us, and the Clauses do exactly that for Durango every year just after Thanksgiving.

The strange twist to this story is that a year before our sushi date with Michele and Edwardo, we’d met them as Mr. and Mrs. Claus. The wife and I were there with the kids and our parents to walk and sing behind the sleigh and “light” the tree with an orange extension cord. It was one of those “full circle” moments that would’ve fit perfectly into a made-for-TV Christmas movie. We laughed about it, and then the conversation turned to other things we didn’t know about each other, other things we hadn’t tried in life. Standard dinner-date talk. That’s when Mrs. Claus told us that Mr. Claus had never tried sushi.

People make a big deal out of first times and last times because life is short and sleepy; we focus on novel moments because that’s all we’ve got. Eating sushi for the first time is one of these moments. Raw fish that you eat with sticks ... Ooo ... fancy. It was exciting to think that I could be there for Santa’s first sushi roll. He’s an eternal being, ethereal, and he’s been traveling the globe for an eternity, but he’s never eaten sushi.

I know that I’m stretching this metaphor a bit by taking the whole “Santa” thing literally, but to some degree, we all believe in Santa, just a little. And I embraced that belief. I called the waiter and ordered a spicy tuna hand- roll. If you’ve never had one, picture an ice-cream cone made from seaweed filled with raw and rubicund tuna. It came a few minutes later, and we all took pictures and cheered while Santa took his first bite. The wasabi was spicy. The soy, salty. The fish was fresh, and Santa liked it. A perfect night.

The wife and I have done plenty with the Clauses in the time that’s passed. We’ve dumped buckets of water on rafters during River Days; we’ll do it again next year. We’ve played epic games of kickball; I came away with a mild concussion and some fresh grass stains. We’ve par- tied and drank and smoked briskets and watched movies. It’s been awesome. And now the season is here again. It’s time to stop using Michele’s and Edwardo’s January-November names. Now, it’s time for Christmas.

If something is repeated enough times, it loses its magic and decays into a platitude. After this election sea- son, we’ve heard that we “need to come together” a nauseating number of times. But it’s true. We need to embrace all that saccharine Hallmark sentiment that floats around in the air with the falling leaves. We need to do our damnedest to love our neighbors, our friends, despite our differences. This season is the perfect time for it, and frankly, it shouldn’t be that hard. There is no better place to be for Christmas than Durango, Colo. Just think about the mountains and pines, our streets and buildings; the Polar Express. We have a dedicated Mr. and Mrs. Claus. We have a community that loves to sing be- hind Santa’s sleigh as he leads us to a park where we celebrate. So how hard could it be to come together right here, right now?

Because, guess what? When they’re not dressed in their holiday regalia, Mr. and Mrs. Claus are people who cherish their political, social, religious beliefs just like the rest of us. Their beliefs are different than my own. But I follow their sleigh every year. I call them friends every day. I keep secret their true identities because our differences don’t matter, despite how hard that might be, because that’s what it’s all about. So, this year, make sure you’re there, the Friday after Thanksgiving, in Buckley Park. We’ll smile and sing, we’ll come together and move on.

What: Singing with Santa, caroling procession with Santa and Mrs. Claus followed by tree lighting

Where: Meet at First National Bank parking lot, then proceeding down Main Avenue to Buckley Park