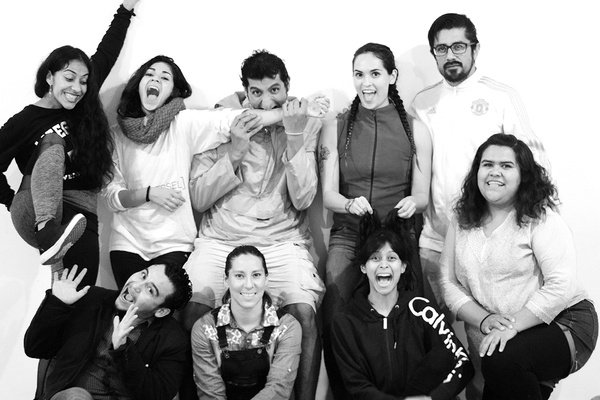 To most Americans, the annual “Day of the Dead” is conceivably Mexico’s best known holiday after Cinco de Mayo. The event, which takes place from Oct. 31 – Nov. 2, entails creating ornately decorated altars in remembrance of deceased loved ones. The “festivities” typically include colorfully decorated skulls and skeletons as well as the sharing of traditional foods, such as pozole.

But an upcoming performance at the Durango Arts Center plans to take the event a step further – or two. On Fri., Nov. 2, the Arts Center presents “11:11,” a remarkable contemporary – and participatory – dance performance by Mexico City troupe Sur Oeste Arte Escenico.

Peter Hay, the Durango Arts Center’s exhibits director, is a devotee of the holiday, believing it has become a cultural bridge and helped demystify people’s views regarding a range of universal topics, from death to what it means to be human. As a result, he not only shepherded the DAC’s recent “pozole” parade but the Sur Oeste performance as well.

“11:11 addresses people’s hopes; our connections and similarities to each other,” he remarked. “I am excited to share it with the arts community and believe it will be inspiring.”

The staging of the piece, which is described by Sur Oeste as reflecting “the anguish and impotence of the Mexican social, political and economic environment,” will require audience members to follow the troupe around the theater as they move. As a result, attendance will be limited to 100.

The Spanish speakers among us know sur oeste means “southwest,” but in this case the title refers not to our Four Corners region, but to the area southwest of Mexico City where the dance company originated. The group’s co-founder, Stephanie Garci?a, who was the creative director for 11:11, said the basis for the work grew out of an exhibit she saw at the Tate Museum in London featuring work by South African artist Jane Alexander. Titled “African Adventure,” the work consisted of 13 animal-like figures and was meant as a commentary on the legacy of abuse in post-apartheid South Africa.

She found Alexander’s piece, which featured human figures with animal faces, most of them monkeys wearing suits, stirred feelings reflective of her own experiences in Mexico: feelings of power, repression and abuse. Garci?a was captivated and said the Tate show was a revelation for her. “I was completely amazed about how powerful it is. I was shocked.”

In creating the choreography for 11:11, Garcia drew inspiration from the enigmatic yet politically charged nature of Alexander’s piece, incorporating her own elements of theater, light and sound. “I ... did my own work trying to express all the coincidences within my own social and historical context,” she said.

Out of that process came 11:11 (pronounced ohn-tze ohntze in Spanish.) As Garcia explained, many people have a synchronistic relationship with that number sequence, and numerologists believe events linked to 11:11 appear more often than can be explained by chance or coincidence. Some people claim that seeing 11:11 on a clock is an auspicious sign while others claim it signals the presence of a spirit.

Garci?a acknowledged that in the past three years, 11:11 was a recurrent hour for her and believes it can serve as a euphemism for trying to understand repetitive cycles and our seeing need to repeat the same historical mistakes. “It’s about how human beings are rational and civilized but (then) in the next moment react in an incomprehensible way,” she said.

According to Garcia, the performance explores the cycle of life and death and the search for meaning in both. It also asks, but does not answer, the questions: humans, animals or monsters – who are we? And what are we?

Performed by Garci?a and seven members of Sur Oeste, the performance had its debut in Havana, Cuba, last year and has been performed in Mexico City, New York and Albuquerque. The piece’s unusual staging and lighting includes writhing bodies emerging out of darkness and then vanishing, somber figures representing victims and oppressors, and mesmerizing movement meant to both compel and repel onlookers.

And tying into the Dias de Los Muertos theme, red paint will be used as a metaphor for the blood the Mexican people have spilled throughout their country’s history.

“That blood not only represents the people that have passed away as the result of our fight for independence and the revolution, but also for the ‘disappeared’ women and men,” Garci?a poignantly explained, “every murder, every colonization act, every submission or discrimination act, all the violence and crime, all the injustice that is there every day, every hour, every year since somebody taught us to feel that being a Mexican native is shameless.”

Hay cautioned that the audience will be following the dancers around the space so the number of tickets has been limited to 100, less than half the theater’s capacity. He noted, too, that following the performance audience members will be invited to stay for a Q&A with the dancers.

“The beauty of the dance and attendees’ connection to the nontraditional use of space makes this a unique occurrence,” he said. “We don’t often have this type of work.”