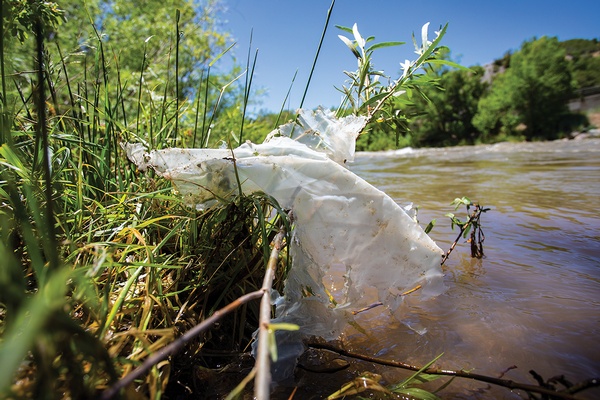 A piece of plastic hangs on a branch in the Animas River. If you thought plastic was only something seaside communities and island nations had to worry about, think again. All waterways eventually empty into the ocean, making it a problem for all of us. A new film, "Albatross," highlights this through the plight of, you guessed it, seabirds./Photo by Stephen Eginoire

The 1970s: a stormy decade with the silver linings of rock ’n’ roll, lava lamps and the magical mystery marketing genius behind the slogan “Reduce, Reuse, Recycle.” Only one of those was introduced to pop culture by the sometimes-groovy United States government.

According to the internet, the 3 R’s and iconic chasing arrows were pitched during the Environmental Protection Agency’s 1976 Resource Conservation & Recovery Act. As cities bloated with people and stuff, the RCRA was enacted to raise consumer awareness about wiser waste management. The alliterative catchphrase served its purpose, but, nearly 50 years down the garbage-strewn road, a new revolution of R’s has arisen: Refuse. Reduce. Reuse.

“Recycling should be the last-ditch effort, while the first thing we have to do is refuse: refuse the plastic straw, the plastic bag and the stuff wrapped in plastic – because that plastic’s not going anywhere,” Cristin Salaz, owner of WeFill, a local cleaning supplies refilling station featuring biodegradable products, says.

A part-time wildlife biologist with Animas Biological Studies, Salaz used to clean houses when she wasn’t bird-banding. She recalls crying as she scrubbed toilets, mourning not only the election results of 2016 but also the myriad cleaning-product empties she tossed away. The mindless waste prompted her to grab a pen and notepad and go through her own house to inventory all the single-use plastic she, her husband and the cat used.

The amount was life-changing, and out of that reality percolated Salaz’s raison d’e?tre: to open a household-and-personal-care-products replenishing station for the Durango community and thus provide another R option to the waste hierarchy: Refill.

“At WeFill, I sell an entre?e of hope with side dishes of fear and shame,” she says. “If everybody can find two things in their house to refill, that’s a lot.”

For Salaz, curbside composting with Table to Farm has been a single-use-plastic-reduction game-changer. She says she hardly uses garbage bags now. This includes plastic grocery bags that are somehow, to the shock and chagrin of local environmentalists, still unregulated in Durango.

While we wait for local citizen scientist and green business owner Alex Santos to open her zero-plastic-packaging grocery store, the day of reckoning is nigh for ye ole plastic bags. Santos, Salaz and Table to Farm Compost owner Monique DiGiorgio are resurrecting the bag ban conversation that last appeared on voter ballots in 2013. If their crusade prevails, the sack shall finally be sacked.

“Because the plastic bag ban was not supported by the community, we’re taking a step back and letting things build organically through an individual pledge,” says DiGiorgio, a former wildlife biologist and current managing director of Local First.

The opportunity to sign this individual pledge commences July 16 at the Animas City Theatre when WeFill, T2F and Santos will host a screening of the film “Albatross,” a beautiful, horrifying documentary (read: not suitable for kids under 13) that addresses what can happen when we throw plastic “away.”

“Albatross” is the culmination of The Midway Project, a collaborative film and photography venture that began in 2008 halfway between the U.S. and Asia in the Pacific Ocean on a 2.4-square-mile atoll aptly named Midway. Midway is known for two things: its military history as a U.S. Naval Air outpost till 1993 and its designation as the Midway Atoll National Wildlife Refuge starting in 1996.

Besides being a haven for monk seals and spinner dolphins, the Refuge also serves as the annual nesting grounds for 1.5 million albatrosses – and 20 tons of plastic debris from the Great Pacific Garbage Patch, a quarter of which ends up in the bellies of the gooney birds. While adult albatrosses can regurgitate the rubbish, albatross chicks cannot, and a third of the season’s hatch dies from bits of faded toys, toothbrushes and cigarette lighters obliviously fed to them by their parents.

As to why the gooneys confuse the plastic with healthier meal options, like squid or fish, scientists have recently discovered that as plastic biodegrades in salt water, it develops a chemical signature that smells like the marine creatures these seabirds deem food.

“Since they feed just off the surface, they pick up whatever has that smell and bring it back to their chicks,” Beth Wolff, wildlife biologist and U.S. Fish and Wildlife Service volunteer, said.

Like clockwork, the charismatic birds arrive on Midway every October. By the month’s end, hundreds of thousands of albatrosses have ascended on the tiny island joining the 40 or so humans who are there to witness what unfolds next: an extraordinary microcosm of the circle of life, birth and death.

Wolff, who banded birds on Midway from October 2016 - March 2017, explains that most of these 625,000 breeding pairs return to within 15 meters of where they hatched and end up mating with their long-term mates in view of their childhood bedrooms. And so begins two weeks of wild, languid fornication – with their brothers and sisters, grandmothers and great-grandmothers nearby relishing their own leisurely bouts of copulation followed by all the post-coital cuddling, caressing and pruning to make nonintimate beings cringe.

“The soil on Midway is made up of three things: sand, plastic and bones,” says Wolff. “We’d clean up the beach every day and there’d be more plastic every day. You see more plastic debris than driftwood or anything organic, and it’s the most remote island in the entire world. It’s more trash than I’ve ever seen in one place.”

Despite the soul-crushing sight of a baby bird corpse riddled with bottle caps, Wolff recalls her time on Midway as far from glum. She points out that, while global modeling reveals rising ocean levels will take out most of Midway in the next 40 years, the albatrosses are better off than they’ve been in a long time. In fact, on Midway resides the world’s oldest known wild bird, Wisdom, still knockin’ boots and laying eggs at 68 years old.

“Being on Midway was not depressing,” says Wolff. “It was complicated but exhilarating, so raucous and energizing.”

Wolff, a former Durangoan, now does compliance work for energy development projects in the Mojave Desert. Her role is to identify habitats of the desert tortoise and ensure the turtles are unharmed and their homes restored after construction.

“If we didn’t have the Endangered Species Act, I wouldn’t have a job,” she says, pointing out the power of law. “Solutions lie in governance and not just everyday consumption choices. If it doesn’t come from the top down, there’s an unrealistic pressure on people to protect the planet. The actions we take make a difference but so does voting and legislation. Vote for the bag ban. Outlaw balloons; they end up in the trees, in the ocean, in the desert, but they don’t disappear.”

Fun fact: According to the United Nations Ocean Conference, the oceans might contain more weight in plastics than fish by the year 2050.

“It’s hard to bring that message from the ocean back to landlocked folks who are busy and looking for convenience, but your day-to-day choices do make a difference,” says Wolff. “Anything we can do to reduce a culture of single-use plastics would be great not just for the albatrosses but for us.”

Apart from last summer’s brush with Hurricane Bud, Durango’s relationship with the ocean is long distance at best. We know about the plastic straws shoved up sea turtle noses, but there’s a sense of detachment that comes from being an inland state, which is exactly what inspired the Colorado Ocean Coalition to form in 2011. The organization grew into the Inland Ocean Coalition by 2017 with a mission to engage inland communities in land-to-sea stewardship.

“You don’t have to see the ocean to protect it,” states the IOCO website. “Those who live among mountains, rivers and inland cities have a direct impact on the cycle of life in the ocean.”

Watching a film like “Albatross” should also help drive that message home. Take it from film-hostess Santos, who first discovered the documentary at MountainFilm in 2017.

“After seeing ‘Albatross,’ my life was forever changed because no more could I look at a bottle cap and not think of an albatross chick,” she says. “I started looking at everything I use in my life differently. I even make my own hummus and cream cheese.”

On World Oceans Day 2018 (June 8), “Albatross” was screened at the United Nations, and, from that moment forth, director Chris Jordan announced the “collective-consciousness raising experience” would be made available to the world as free public art. You’d think free public art would be the perfect price for a nonprofit affair. But, alas, the hosts are two for-profit businesses, WeFill and Table to Farm Compost, and Santos, the impassioned hummus maker. The bar just got raised for how business can be a force for good, for social and environmental change.

“I don’t have kids, and I’m not doing this for me because I’ll be dead,” says Salaz. “I’m doing it for future generations of all species – and Keith Richards and Willie Nelson, cuz they’ll still be around.” 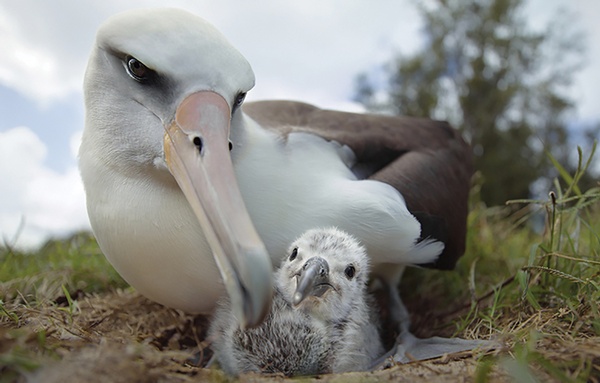 "Joy is the smell of a freshly hatched albatross chick," biologist Beth Wolff said of her time on Midway. However, the proliferation of plastics is threatening the large birds, who often ingest plastic and feed it to their young./Courtesy photo

What: “Albatross,” a creative film
When: Tues., July 16, doors 6 p.m. / discussion 6:30 p.m. / movie 7 p.m.
Where: Animas City Theatre
Cost: Suggested donation $10 contributed directly to the film
Note: This is a plastic-free event. If you’d like a beverage, please BYO cup (no glass). Due to graphic imagery, this film is not recommended for children under 13.