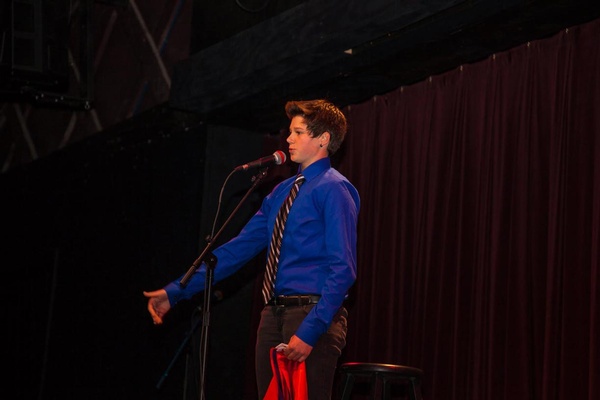 Last year, “Be Heard” was a vulnerable, raw and sometimes angry poetry championship for Durango – otherwise known as a poetry slam. The champion, Amy Leonard, rose to victory with a visceral style, fueled by her struggle to find a place in life as a homosexual teen. Yes, that’s right, the poetry champion of Durango is 16 years old.

And next Fri., April 14, Leonard and others will again take the stage as “Be Heard” returns for its second year at 7 p.m. at the Henry Strater Theatre.

The event is the brainchild of Ashley Merchant, director of community impact for our local United Way chapter. All proceeds from the event go to the United Way, which then distributes the funds to other Durango non-profits.

Merchant has been a longtime attendee of the open mic events held at the Steaming Bean and noticed many of the talented poets were moving on to bigger cities, with larger audiences for their craft in mind. Merchant decided she wanted to help local poets have a larger venue for their poetry, and “Be Heard” was born.

“At those open mic nights, I witnessed the ability of the poet to inspire people,” Merchant said. “Poetry really fires people up about issues, and it brings hearts and words out from the dark.”

Merchant is an organizer who is never one to say no to a good idea, and last year’s “Be Heard” had everything from straight-up poetry to beatboxing, hip-hop and modern dance. The participants ranged from teenagers to great-grandfathers. The emcee, Ben Fisher, also served as a stand-up comedian while the event went through the usual first-time glitches. The caveat for last year’s event was that each poet received a rating from the judges, poetry slam style, something that Merchant decided to do away with this year.

“This time we’re focusing on the art versus the competition,” Merchant noted, “We want to have a poetry jam, rather than a slam. Myself and all of the poets decided we’d rather focus on the element of voice and connection versus competition.”

The spirit of collaboration is something even the champion, Leonard applauded. “Last year felt very inclusive, and the poetry was exceptional. It was a great way to connect with other members of the community as well as learn from them. I grew that night not only as a poet but as a human being.”

For Leonard, it goes beyond a good performance, and she is wise enough to know that if she did take her poetry to a larger, national audience she would want to be clear about her goals for putting more effort into the craft. She’s also young enough to be bold about what she can do with her words and her life. “If I ever advanced to the national slam poetry scene, I would need to decide what I would like to try to change in the world first, and put everything into making that change happen,” she said. “Overall, I like the joy of poetry and not knowing where it will take me.”

Gretchen Groenke, a poet from Mancos who made it to the final round last year, said she appreciated the audience just as much as the performers. “I felt like everyone who shared was really held, and their words were given a safe place to land,” she said. “I’m a closet poet, and I know there are many others like myself. The power of poetry and words in general is to share them.”

Amongst the 30-some people who took the stage at last year’s event was a dancer named Natalie Benally. Last year, she performed a solo piece that used dance as a medium to call attention to the high rates of sexual assault on Native American women. This year, Benally, who is part of the Dancing Earth Contemporary Dance Co., will share the stage with Justin Giehm, who is also a member of the group. Dancing Earth is an inter-tribal dance group that strives to cultivate indigenous dancers as well as contemporary Native American performing arts. The two will also include spoken word into their performance.

“The piece I am showcasing this year will focus on the issue of suicide, but also the healing portion of such a difficult topic,” Benally said. “The piece emphasizes the moment when one decides whether to live, or to die, and derives from my own personal contemplation of death, loneliness and redemption.”

Benally also was immensely moved by last year’s event. “It was so inspirational and healing for people who not only spoke, but for people who just took part in being there,” she said. “I have always been an avid admirer of spoken word poetry ... the bravery and charismatic platform these poets give just sends a fire throughout my entire body.”

In addition to poetry, the evening will include an art exhibit compiled by Venaya Yazzie, a painter and Fort Lewis College graduate. Titled, “Musing the Matriarch: Neo-Native Women’s Art,” the show is comprised of Four Corners area multi-media female artists from various tribes.

Luke Mehall is the author of American Climber, and a spoken word poet. More of his work can be read at climbing zine.com and lukemehall.com.

What: “Be Heard” poetry jam

Where: The Henry Strater Theater

Tickets: $15 in advance, $20 at the door. Available at www.unitedway-swco.org.