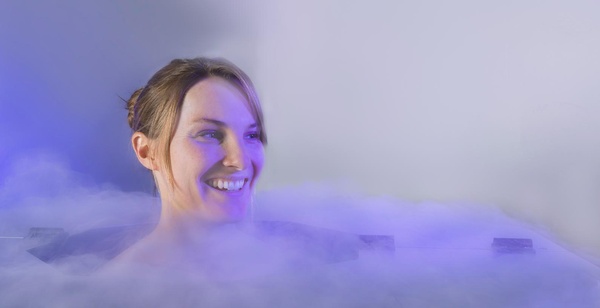 Local runner Claire Roser takes a dip inside the cryo tub. The newly opened Durango Cryotherapy offers a one-of-a-kind experience locally as a way to relieve aches and pains related to overuse and other injuries./Photo by Ben Brashear

Jason Skeens is a wall of a man. He served nine years with the Army 82nd Airborne and still looks combat ready. His shoulders barely fit through the doorway as he leads first time client Claire Roser toward the door of the sauna. Although a sauna typically conjures visions of warmth, this is a different sort – an octagonal booth roughly 6-feet tall that is capable of reaching temperatures more reminiscent of a deep freezer.

Skeens is the chief cryotherapy operator at Durango Cryotherapy. “Cryo” is the Greek word for “icy cold,” and the “sauna” at Durango Cryotherapy is capable of reaching temperatures as low as 220 degrees Fahrenheit below zero. The sauna opened in April of this year within the Assertive Wellness Center, which is located in the Tech Center and owned by naturopath Shauna Young. It is the only facility of its kind in the area, used to treat muscle and tissue injury and help restore mobility.

Roser, a long-distance runner, typically treats her muscle soreness with ice baths following runs. Standing in her white bathrobe and requisite neoprene booties, she is tense. Skeens assures her she will do fine considering her experience with ice baths.

He adjusts the height of the platform of the sauna with foam pads and has Roser step in. There is a hole at the top for her head to stick through, and he checks to see that she will adequately be above the escaping vapors.

A digital display on the sauna puts Skeens in control. From it, he can regulate duration and temperature (-180 degrees for new clients). He is required, as a safety protocol, to press a “continuation button” every 30 seconds. If that button is not pressed every 30 seconds, the sauna will automatically shut off.

“My main job here is to help clients navigate that fight-or-flight emergency response. I watch their breathing and encourage them to breathe with their diaphragm. After a few sessions, most look like they are just sitting in a hot tub, relaxed and calm,” Skeens says.

The chamber is cooled with liquid nitrogen vapor, dispensed through several ports inside the sauna. Skeens advises Roser to rotate about once per minute. “Like you’re on a rotisserie,” he jokes.

Because nitrogen displaces oxygen, several precautions have been taken. Skeens is CPR certified and is certified through Impact Cryotherapy, the manufacturer of unit. The room has been fitted with an oxygen monitor, and clients are continually reminded to keep their head above the escaping vapors.

Skeens is critical of cryotherapy chambers that require clients to breathe in the nitrogen. Although the vapors are harmless, he says if enough are inhaled, they can cause clients to get lightheaded and even pass out. “The hardest thing to get through to people is maintaining their breathing without looking down into the chamber,” he said.

Whole body cryotherapy (WBC) is a relatively new treatment developed in Japan in 1978 by Dr. Toshiro Yamauchi. Yamauchi had measurable success in lessening his rheumatoid arthritis patients’ perceived pain and in increasing their mobility. Its use was later adopted by medical centers in Germany and Poland. After gaining European Medical Device approval, much of Europe has incorporated it as a supplementary treatment for arthritis and physical therapy.

Despite not having approval from the FDA, WBC has over the past decade made its way into the United States. Made popular by professional athletes, it is now used by everyone from recreational athletes to members of the military. It has even crossed into the spa and beauty market.

Skeens is not dismayed by the lack of FDA approval. He says although WBC originated in the medical field, the way it is being used now is not intended to cure anything. He says it’s simply a way to trigger the body’s natural ability to heal itself.

“If you want to get into the meat and potatoes of cryotherapy research, look into the athletic community,” he says. “On the health spa side of things, you’re going to see a lot of ‘bunk’ with regard to claimed benefits … that it burns calories or helps with weight loss. And you know, it may be a side effect, sure, but it may just be that you are losing water weight. We don’t make any claims and don’t claim it will cure anything.”

Instead, Skeens says he can only attest to his own personal experience. A self-proclaimed skeptic, he said when the offer came to work at Durango Cryotherapy, he hesitantly accepted and was quick to test out the cryo-sauna. He said after a few sessions, he noticed relief in his neck and back. “I can say that all the Motrin and pain killers didn’t do what cryotherapy has done for me,” he said.

Now, you may be asking, if WBC is in the realm of ice baths, why not just jump into a tub of ice and save a few bucks? It all comes down to your intentions and delving into an age-old argument that goes beyond the scope of this article.

What can be said, though, is that notable fitness gurus, such as sports trainer and author Gary Reinl, crossfit pioneer and physical therapist Kelly Starrett, and even Dr. Gary Mirkin – the very doctor who coined the rest, ice, compression, elevation or “R.I.C.E.” modality – are now arguing against ice and ice baths to treat inflammation and overuse injuries. Their argument, summed up in a few words, is that the direct application of ice actually shuts down the lymphatic system, inhibits tissue repair and encourages congestion in damaged and inflamed tissue. Rather, they now believe that movement, compression and profusion, or flushing new blood into injured tissue, are required for a speedy recovery. However, they concede that ice still is useful as a simple analgesic to reduce pain, and ice baths have their place in cooling the body’s core temperature after intensive training.

How then does WBC differ? Essentially, WBC works by chilling the ambient air anywhere from -166 to -220 degrees, which, in turn, decreases the skin temperature to roughly 34 degrees in a very short time. It is this rapid cooling that triggers a systemic response – the “fight-or-flight” that calls for an increase in endorphins, adrenalin and noradrenalin. Then there is the vascular response that causes blood to quickly move from the extremities toward the core. As blood moves to the organs, it becomes nutrient dense, richly oxygenated and ripe with pain-killing endorphins. After the three-minute session is done, it is the drastic contrast in air temperature that causes this enriched blood to rush to the extremities, to sore, damaged, overworked muscles and joints.

“You will have an endorphin and adrenalin release and those are natural pain killers. Blood rushing into the core and flushing back out can potentially reduce swelling and inflammation which, again, is a huge thing even if it is only temporary,” Skeens says.

Skeens has finished prepping the cryo-sauna for Roser. She steps inside and he seals the sauna around her. She hands her bathrobe to Skeens over the top in exchange for a pair of warm gloves. Liquid nitrogen vapors begin to spill down the side as she slowly rotates.

For the next three minutes, Skeens is consistently checking in. He notes her breathing and anticipates the “flash” of her pupils dilating, the subtle indicator of the fight or flight. Roser is nothing but calm as Skeens jokes that it must not be cold enough. Next time, he says, she’ll get -200 to -220.

The session ends, and as Roser steps from the cryo-sauna, her skin flushes red. Giddy from endorphins, she says she is hooked and can’t wait to try a colder session.

A few days after the session, Roser admits she just might be a convert. “I felt great and the pain I feel in my hips from running was much less noticeable,” she says. “I think that multiple sessions will really help me out.” 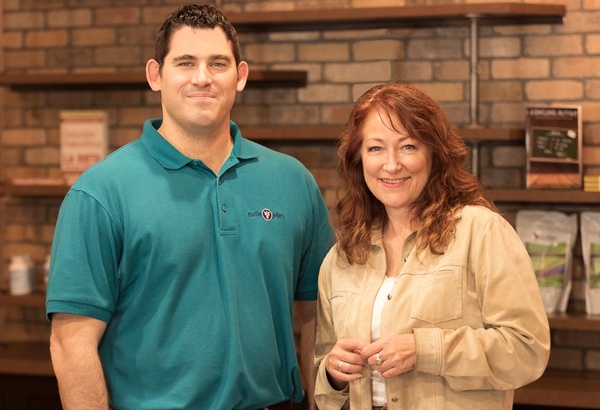 Jason Skeens and Shauna Young, owner of Durango Cryotherapy and Assertive Wellness Center. The center's cryo-sauna, which reaches temperatures of -220, is the first of its kind in the area./Photo by Ben Brashear