The cycle of life
For more than a decade, Devo Swap keeps good times rolling

There’s a long-running joke in Durango: You know you’re a local when your bike is more expensive than your car.

But, for anyone who has perused the glossy pages of the latest bike mag or the even glossier racks at the local bike emporium knows, the sticker shock of a brand-spanking-new bike is no joke. With things like carbon frames and wheels, dropper posts, and technology changing more often than most riders change their chamois, getting a new set of wheels can be a daunting affair.

So, what’s a family on a budget, a biking newbie or regular Durango-tango-ing Joe or Jane to do? Short of winning the lottery?

Fortunately, living in the mountain bike capital of the world (or at least Southwest Colorado) as we do, there’s the next-best thing: the Devo Swap.

Started as the Veloswap around 2007, Devo took the reins of the annual bike exchange soon after, as a fundraiser for its bevvy of youth development programs.

This year’s swap, which is expected to feature between 300-400 bikes, rolls into the recently thawed Chapman Hill Ice Rink this Sat., April 20. (Yes, that’s  4/20. But more importantly for the purposes of this story, it’s two days before Earth Day – so, talk about the ultimate way to recycle.)

“The cool part is, people get to bring their old equipment in and get the next level up,” Swap organizer and Devo uber-volunteer Amy Haggart said. “We recycle 300 bikes a year.”

For those looking to cull their quiver or put that bucket of random parts to good use, check-in for selling items is from 2:30 – 8:30 p.m. Friday, also at Chapman. Devo takes 20 percent of sale proceeds (15 percent from pros) and the rest is yours to keep (or spend on a new bike or new bike shwag.) And, of course, straight-up do-nations are always welcome.

Although the swap opens its doors at 7:30 a.m., she notes that volunteers (an army of 170 is needed to make things flow smoothly) get a special sneak peek the night before. This is particularly useful for the gear brought in by the plethora of local pros, including a certain legend who has a mountain park named after him and a sweet Specialized hook-up. (And no, we don’t know when or if Ned’s going to drop off his gear, so don’t ask.)

All joking aside, remember, the swap is for the children. So, please conduct oneself accordingly when bargain-hunting.

Robbins, who at 17 has a slew of race titles under her belt, was recently named Woman of the Year for mountain biking by Sportswomen of Colorado. And although she’s now sponsored by Trek, it wasn’t that long ago, at the tender age of 12, she was scoring bikes at the swap.

Fortunately for Robbins, dozens of experts were on hand to offer advice, from Devo coaches and local wrenches to the pros themselves. This goes the same for anyone looking to piece together anything from a dream race machine to a cool Frankencruiser at the swap.

“We make sure bike experts are there so people get the right bike and the right fit,” said Haggart. Several local bike shops help out at the swap as well, knowing creating more cyclists is a win-win down the road with parts, maintenance and upgrades.

For Robbins, her Devo coaches helped her find parts to trick out her Specialized Carve hardtail frame. “Then Ned got wind and picked through his parts to find what would work,” she said.

And work it did. Robbins went on to place second in nationals that year. She rode the bike for two years before turning it into a bike polo steed and then, as is often the case, having it stolen – by her dad.

Haggart has similar stories of swap, uh, swapping. Several of the bikes she’s bought over the years have been handed down to or shared with her kids, including an Orbea from Alicia Pastore as well as a Specialized from Howard Grotts. “Almost all of our bikes have been from the swap,” she said. “Good bikes get passed on.”

In other words, to riff on another (less politically correct) mountain town phrase: you don’t lose your bike, you just lose your turn.

“You’ll be at the swap and see your old bike come in, and then go out again,” said Robbins.

And keeping this cycle going is what it’s all about.

“We are doing this for the community and the environment,” said Haggart. Of course, the swap’s not all mountain bikes. There’s everything from antiques and road bikes to e-bikes, Huffies and unicycles – not to mention parts, clothing, shoes and widgets galore. (And don’t be surprised if an impromptu bike polo match breaks out while you’re there.)

“We get people from all walks of life,” Haggart said. “It’s really more of a community event, to get more people on bikes.” 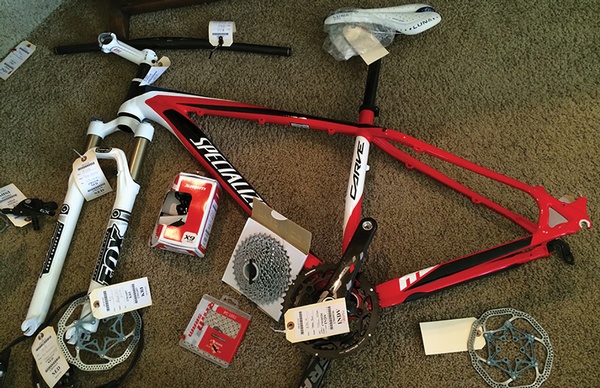