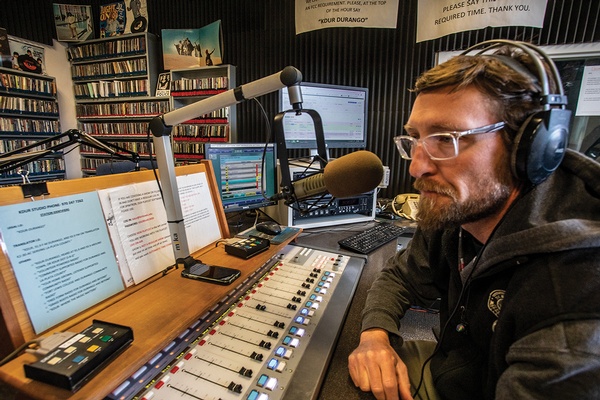 DJ Kynan Kelly, of KDUR's Velvet Rut fame, takes one last spin at the mic. After 10 illustrious years of filling Saturday mornings with rock 'n' roll, cowpunk and garage-acana, Kynan and cohost Rags are hanging up their headphones./ Photo by Stephen Eginoire

Many a Durangoan nursing a Saturday morning hangover may be finding themselves without their favorite hair of the dog. Quietly and with little fanfare, one of Durango’s most beloved radio shows, the “Velvet Rut,” left the KDUR airwaves late last year, leaving angry sober people and happy drunks everywhere without a home on the FM dial.

“I’m totally sad, it’s the only thing I’ve ever given up in my entire life,” Velvet Rut DJ Kynan Kelly said.

For the last 10 years, Kelly and childhood chum Jason “Rags” Ragsdale spent their Saturday mornings spinning alt country, cowpunk and other assorted oddities of the twang-iverse for local eardrums (likely still pounding from the previous night’s activities). When Rags moved to better climes in Arizona a few years ago because of complications from MS, Kelly carried the musical blow torch for a few more years. However, as is wont to happen, adulting soon caught up with the father of two girls, ages 7 and 10. (As many a Durango parent knows, weekends are reserved for things like Super Soccer Saturdays, trips to the Rec Center pool and Snowburner Sundays.)

With wife Marie at work on Saturdays, Kelly would often bring the girls to the studio with him – but even that became increasingly hard to juggle, with guest DJs having to frequently fill in.

“And I thought I had a hard time getting up there with a hangover,” Kelly said.

Eventually, it was time to face the music.

“It’s not fair to the others to keep having to fill the spot,” said Kelly. “I figured if there’s someone with three hours free on a Saturday morning, they should have a chance.”

As luck would have it, there was. Earlier this winter, “Rock Gypsum,” an indie-alt-college show by Alexandra Walters, took over the 9 a.m. - noon Saturday slot (and you all should tune in, hungover or not).

“(Kelly) just wasn’t pulling down the ratings like we wanted to get,” KDUR station manager Bryant Liggett joked.

But in all seriousness, Liggett wants the listening public to know he was in no way responsible for the Velvet Rut’s departure – so you can stop the angry phone calls and Facebook threats.

“It was not a management decision, trust me. We were willing to help out and do what it takes to keep it going,” he said. “It was a tough decision.”

In fact, it was much tougher than the decision to make the foray into radio all those wasted days and wasted nights ago. According to Kelly, he was inspired by mentor, friend and frequent drinking buddy Chris Aaland. Back then, Aaland, who writes the “Top Shelf” column for yours truly, was doing his “Cask Strength” Americana show on KDUR (in case you haven’t gathered, the drinking theme figures heavily here).

“We thought why don’t we try to do a show?” Kelly remembers.

As luck would have it, Chap Myers was wrapping up his “Go Pogo” Saturday morning show on the Fort Lewis College run station – and the “Velvet Rut” was born.

Except it wasn’t called that – at least not at first.

“The original name was ‘Righteous Wronged,’ but it was too hard to say intelligibly,” Kelly said.

The “Velvet Rut” moniker came from a common saying of Rags’ when Kelly moved away from Durango after high school and Rags stayed. And no, it has nothing to do with hunting or large ruminants.

“I would call Rags and he would say, ‘I’m in a rut, but at least it’s lined with velvet,’” he recalled.

The name stuck – and ended up encapsulating the show’s ethos perfectly. Despite having to get up early on a Saturday morning with a pounding headache and fuzzy if not remorseful memories, there were worse places to be than spinning rock and roll with your best bud.

“You did it no matter what, no matter if you were black-out three hours before,” Kelly said. “You’d drag yourself in there and order burritos from CJ’s.”

In fact, the show went on the day after Kelly’s father, former FLC History Professor Reese Kelly, passed away.

“I don’t think I did a very good job, though,” he admits.

Other things you could count on from the “Velvet Rut:” witty, irreverent banter; lyrics that would make Hank Williams roll over in his grave; and at least one set featuring the Supersuckers followed by the Rev. Horton Heat. It was, after all, the “dark and hilarious side of country,” which entailed everything from “Old Blue Car,” by Canada’s indigenous Big Twang Band to “People Who Died,” by the Jim Carroll Band.

“A lot of times, it was cover your eyes and hit ‘play’ and wait for the blowback,” Kelly recalled.

Surprisingly enough, after 500-some shows, that blowback never came (although just to be safe, Rags never used his real name on the air for fear of repercussions at his real job.)

“We just assumed it was because the weather was too nice,” Kelly said. “Everyone was out skiing or mountain biking.”

Of course, no first show of the month for the Rut, as aficionados came to call it, was complete without “Common People” by none other than Capt. Kirk, aka William Shatner.

“We were just perusing the KDUR stacks and were like, ‘Holy crap,’” Kelly said of the discovery. “We’d seen him on the Priceline commercials, but had no idea. When we listened to it, we were like, ‘Oh my god.’ It spoke to us, and we hoisted it on everyone else.”

Kelly is quick to note that much of what they played wouldn’t fly at other radio stations – not even ones in progressive West Coast bastions like British Columbia, where he lived for a stint.

“KDUR is awesome, you can’t do a show like this anywhere else,” he said, “to just say, ‘Hey, let’s open this up to anybody who wants to play any kind of music.’”

Rags, from his home in the banana belt, said he was crying quietly into his beer over the end of the Rut.

“It was a good run,” he said. “I am sad that it finally had to come to an end. I love everyone at KDUR – I just couldn’t stay in Durango any longer since they closed the KFC.”

Alas, like all raging parties, and raging hangovers, all things must come to an end.

“I didn’t tell anyone about it, not even my wife,” Kelly said of his last show Dec. 14. “I kinda just wanted to do a regular show with a few shout-outs and fade away.”

So, after some AC/DC for his dedicated 6th Avenue fans (and neighbors), he cued up Capt. Kirk one last time, and then dropped the mic.

“People loved it, hopefully it will come back some day,” Liggett said.

And for Rut holdouts, maybe there is still a small glimmer of hope in that velvet-lined pit of despair.

“I never want to say never, but who knows,” said Kelly.

For the full rundown of all of KDUR’s offerings, go to www.kdur.org. 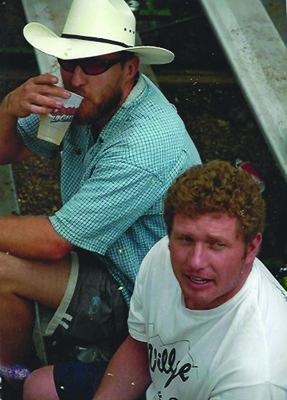 Kelly and Rags at the Demolition Derby in earlier days. Rags recently moved to Arizona for health reasons and because Durango's KFC shut down (some would argue the two cancel each other out.) 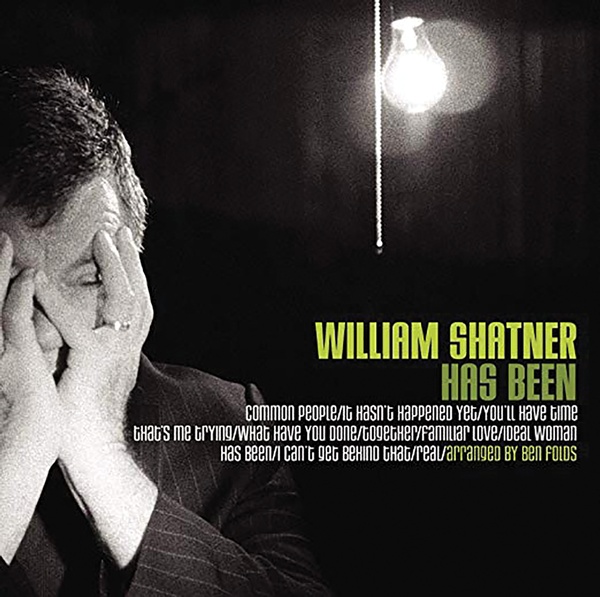 The coveted William Shatner album “Has Been,” which features a rocking cover of Pulp’s “Common People.” It’s not as strange as it seems. The album, which actually got some critical acclaim, was produced by Ben Folds and features Joe Jackson. The Velvet Rut closed out the first show of every month with “Common People.” Because they could.