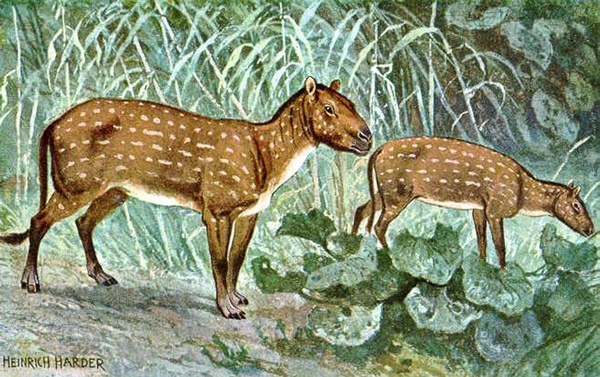 It was the spring of 1959 when my father took me, for the first time, to the Museum of Natural History in New York City. We were living in Brooklyn at that time, and dad was stationed at Fort Jay. I remember anxiously waiting to enter the famous Dinosaur Hall with a swarm of other children. Upon entering, we reveled and gazed with amazement at the enormous skeletons of prehistoric reptiles. It is the same today, as kids always love the majesty of those great lizards.

It was while perusing the various displays of early mammals that I became fascinated by the delicate, miniature reconstructions of Paleocene fossils. Around the corner was a unique display of “The First Horse (Eohippus).” It had a label stating that it was found in the Tiffany Beds of Southwestern Colorado. They were only the size of cats. Somehow, the word “Tiffany” stuck, as I associated it with the candy of the same name.

Years passed, and while in college, I pursued courses in historical geology. Later, I started working for an environmental firm as a consultant. I spent countless hours preparing environmental impact statements for various municipalities on the East Coast. By the spring of 1980, I decided to head west. I fell in love with the expanses of the Colorado Rockies and their geological splendors. I started working for the Southern Ute Tribe, and my avocation was exploring the geology of the area. So when one of my colleagues took her students on a field trip into the HD Mountains, little did I know it was in the same area paleontologists from the Smithsonian explored in the early 1950s. I decided to contact the tribal geologist, Dick Baughman, to see if he was interested in exploring the area as permits were needed. My interviews with the local inhabitants led me to Ethel Chambers. It was my understanding that she delivered food on horseback to the excavation teams years ago. I went to see her, and she consented to guide Dick and I to the dig sites, even though she was confined to a wheelchair. My journal entry reads:

Saturday May 11, 1991 Went out to the Tiffany Beds with Dick Baughman, the tribal geologist.

Picked up Ethel Chambers and her sister Alice in a special van. They guided us to the 1917 and 1953 dig sites. Ethel is 84 years old and hasn’t been to these sites since 1953, even though she lives only a mile or so from the study area. It has been 38 years.

Weather is sunny, around 50 degrees, a cool and windy afternoon.

We explored the sites. Ethel was ecstatic to return to the area after so many years. The escarpments were beautiful with numerous gray, yellow and maroon layers representing the early Paleocene and Eocene epochs. We reconnoitered the wash for about an hour and then returned to Ethel’s trailer. Before leaving, she placed in the palm of each of our hands a rock. Astonished, we both examined the specimens, which revealed a mandible with three distinct molars. She laughed while wheeling herself up the ramp of her porch, “Eohippus, the first horse!” We told her that we couldn’t take these prized treasures. She whispered, “It was a gift from the Smithsonian Team, and they are discarded fragments. I am passing them on to you boys!”

Ethel has passed to a better place, and the little Eohippus jaw and numerous other fossils are now part of a collection I gave to the Ignacio Elementary School Science Department. They are shown frequently to students who, first hand, are able to examine them while studying earth science.

On occasion, while driving to the lake, I pass the old singlewide. It is now empty and gone is the porch that held Ethel’s prized collection of rocks and minerals. As I motor up the road, I smile and think of dad, the museum, Ethel and Alice, and especially, Tiffany, the land of “The First Horse.”