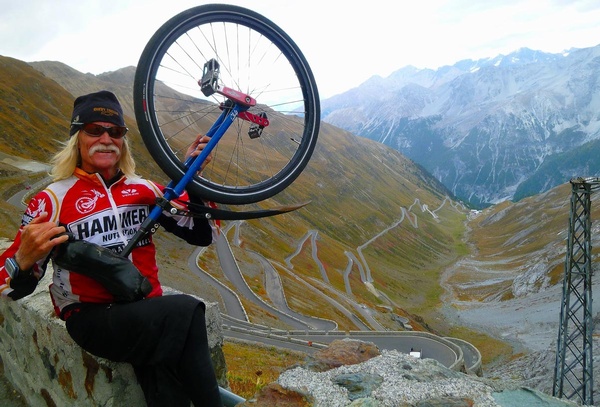 Mike Tierney atop Italy's storied Stelvio Pass – all 48 switchbacks of it – with his trusty uni./Courtesy photo

As you board the struggle bus to Silverton this Saturday and find yourself digging deep over Coal Bank, remember this: Mike Tierney is riding uphill, both ways, with no hands. In other words, he is riding a unicycle. (For the uninitiated, unicycles are fixed gear, meaning riders must work to pedal up, and down, hill.) Even better, this will be his fifth ride to Silverton on one wheel.

If, like me, the questions are flooding in (like, where does he keep his water bottle?), sit tight. They will be answered in due time. But first, a little back story. Like how the heck does one embark on such a journey, literally and existentially?

Well for starters, hopping on a unicycle for the Iron Horse is not a game-time decision, like what flavor GU to bring or what color socks to wear.

“My wife jokes that I created my own category, that way I can win,” jokes Tierney, an Aspen resident who spends his winters ski patrolling at Aspen Highlands (which, like unicycling to Silverton, is also not for sissies.)

But, his love for the one wheel goes much deeper – to his childhood, as most of these types of stories do. When Tierney, 58, was growing up in Tempe, Ariz., a friend threw down the gauntlet. “He challenged us to both learn to unicycle over the summer,” he recalls.

They joined a unicycling club – which, presumably, there are in large cities – and the two quickly took to their newfound endeavor, appearing in various parades and the like.

“It was more the circus side of it,” he admitted.

Alas, he did not run off to Barnum & Bailey – instead running off to Colorado, where he pursued the quintessential ski and river bum existence. Eventually, in 1982, he ended up in Aspen, where he settled down with a regular gig patrolling in winters and running his small solar company in the off season.

It wasn’t until 2001, when his wife – having seen the old photos of his unicycling glory – brought home an antique uni from a yard sale that his fondness was rekindled.

“I got on and rode off into the sunset,” he recalled. “It’s true what they say.”

From there, the spark grew into a full, burning passion.

“I really got into it,” he said. “I started riding stuff I rode on two wheels and having success.”

This included not just paved roads, mind you, but singletrack and gnarly, rocky trails that might make fully suspended two-wheelers squirm in their cleats. (This subgenre is known as “MUNI,” for “mountain unicycling.”)

But by far, his preferred terrain was the monster climb; the more switchbacks the better. In fact, his favorite climb of all time is Italy’s Stelvio Pass, all 48 switchbacks (but who’s counting?)

So, it’s only natural that Tierney would gravitate to the Iron Horse Bicycle Classic (along with the

Pike’s Peak and Mount Evans’ hill climbs, which he counts as among his top three.) His first Iron Horse was in 2005 – goaded by fellow unicyclist and former Trails 2000 guru Bill Manning.

“I showed up and there were eight of us,” recalled Tierney. “Bill made it to Purgatory. The rest just rode down main street.”

As for Tierney – he went all. The. Way. And while surely there was plenty of guts, not to mention muscle cramping, meditating and going to his “happy place,” there was little glory.

“It was before they turned people back on the passes,” he said. “I was riding down from Molas to Silverton with traffic.”

When he arrived in Silverton, it was a ghost town.

“There was a sign on one of the restaurants that said, ‘Free food to Lance Armstrong and unicyclists,’ but by the time I showed up, they were closed,” he remembered.

But instead of being crest-fallen, he was strangely elated. “As the bus with the riders was going back to Silverton and passing me on my way down, people were hooting and hollering out the windows,” he said.

It wasn’t until 10 years later, in 2015, that an older, fitter and wiser Tierney attempted the fete again. “This time I had it dialed in. I started early with the old people, although I guess I am now one of the old people,” he said.

But don’t let that “old” funny business fool you. Tierney now has four Iron Horses in his seat bag, typically finishing in about twice the time as the fastest two-wheeled honches. He’s ridden every pass over the Continental Divide in the state, and then some. He’s tackled high passes in Europe and set a world record for his sea-to-summit of Hawaii’s Mauna Kea volcano, a 13,888-foot gain in 42 miles.

And when he can’t ride due to snow? Well, in case you haven’t noticed, there’s no “can’t” in Tierney’s vocab. Instead, he rides his uni down the ski runs until he can start training in the Grand Valley sometime around February.

And, he has brought his love of unicycling to Aspen kids, offering a program at the local schools. “I’ve got hundreds of kids to ride in town here,” he said. And why wouldn’t they? Among the benefits of unicycling Tierney extols are an excellent core workout, good cross training for skiing and, perhaps best of all, convenience. “You can park it in front of a store, and it’s usually there when you come out,” he said.

And while he dreams of riding in the Pyrenees some day and eventually tackling all of the world’s hardest hill climbs, one of the highlights is right here in Durango, USA.

“The Iron Horse is my favorite event,” he said. “There’s nothing like it – going down Greene Street with everyone going nuts. It’s a whole other level of enthusiasm,” he said, adding that he never thought he could do one race, let alone five. He credits the beautiful scenery and the camaraderie – not to mention lack of cars – for getting him through. “It’s all because we support each other. When I go by

the other riders they yell, ‘go unicycle,’ and I say, ‘go rider.’ That’s awesome. It’s a big ride for me, a lot of pedaling. But the event is incredible.” 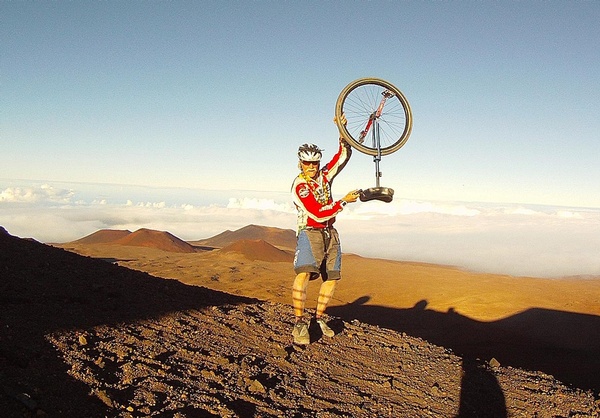 ... and atop the Big Island's Mauna Kea volcano. /Courtesy photo