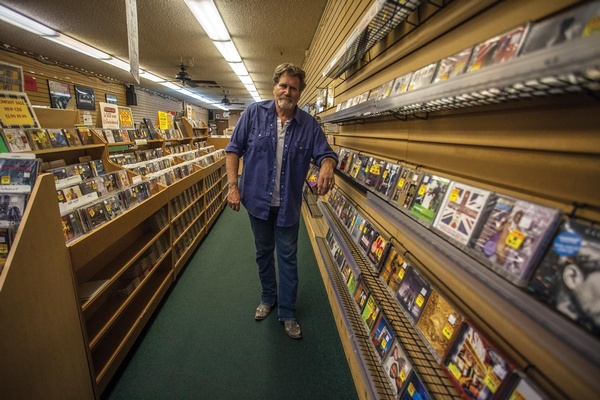 Southwest Sound owner Robert Stapleton in the store Tuesday. The store will sell its last record this Saturday./Photos by Stephen Eginoire

Elvis is about to leave the building. That’s right. In case the huge yellow “store closing” signs or melancholy music lovers flipping through the increasingly thinning CD racks didn’t alert you, Durango’s main purveyor of music, Southwest Sound, is closing after more than 40 years in business.

Take a moment if you need to.

The door officially shuts, the music dies, the fat lady sings and Lloyd lifts the boombox at 8 p.m. this Sat., July 14. But it won’t just be a funeral for a friend. Owner Robert Stapleton has a few surprises up his trademark pearl snap sleeve.

“Dan is going to wear an Elvis costume,” he said, referring to employee and KDUR DJ of “The Horse Show” fame, Dan Groth (who looked a bit stunned at the news.) “If he doesn’t I will, but the suit makes my butt look big.”

In addition, the store will be offering up whopping savings of up to 50 percent on anything that’s not nailed down, as well as food and beverages. “And balloons,” Stapleton quipped.

And for those who’ve had their eye on the “coveted” N’Sync beanie bear keeping watch over the cash register all these years: now’s your big chance. Anyone who stops by can be entered into a drawing for the bear (*Must be present to win. Or not. Details are a little sketchy.)

Of course, the store closing is not all balloons and beanie babies. It’s bittersweet – and for those who immediately begin humming the Big Head Todd song here, likely more bitter than sweet.

“I am thankful for everyone who has come in this door and bought something,” said Stapleton, who bought the store from former owner Hal McLean in 2003. “I would’ve been gone a long time ago if it wasn’t for our customers.”

Indeed, despite it being a Monday afternoon, Stapleton was greeted by a seemingly endless stream of well-wishers during this interview. The SoCal native, quite possibly the sharpest dresser on Main Avenue at any given time, is a veritable walking encyclopedia of musical knowledge. As well he should be. The music biz is really all he’s ever known, from his father working at Capitol Records to him starting the first Tower Records on Sunset Boulevard in 1970.

And while his resume may not be impressive, his personal record collection certainly is. He estimates he  has 2,500-3,000 records at home – a few of his gems, a mere fraction of the total, grace the walls at Southwest Sound. For him, owning records is a tactile thing.

He admits to liking almost anything, from old time blues to Prince (whose poster graced the store window for many months following his Majesty’s death in 2016) to Taylor Swift (hey, the girl can play). However, he does have his preferences: Give him Byrds over Eagles and Yes over Rush any day. The only music he’s not so fond of (this is where some of you will want to take a bathroom break or switch to another channel): bluegrass.

“When I moved here, I had a fear of bluegrass,” he admits, referring to a distaste for the “noodleyness” of the genre (which we totally get).

But – and this is where it’s OK to start reading again and stop planning an indignant banjo mob – he has grown to like it. Sort of.

Because, acquiring a new taste is what it’s all about – in music and in life. In fact, if you study Southwest Sound’s logo, you’ll see that’s their motto: “know music, know life” (co-opted from Tower Records’ “no music, no life.”)

“It’s a learning experience every day,” said Stapleton. “That’s why I do this. I learn a lot from my customers. I like talking music with people. There’s a sense of community people don’t have on their phone or the internet.”

Stapleton, who plans to move to Florida, house-sale pending, first came to Durango via Boston. There he oversaw a Tower Records with millions of dollars in inventory.

“We had every single thing available,” he said. “When I bought this store, I didn’t stuff $1.5 million of inventory in here, but I sure tried, much to the dismay of my wife.” (Speaking of which, Southwest Sound is a true mom and pop, with Robert doing the day-to-day; wife, Sue, doing the books; and son, Cooper, who has since left for the greener musical pastures of Portland, working the register.)

Stapleton said it was always his goal to represent every genre, from hip hop (they once had an entire section dedicated to artists starting with the name “Lil’”) to classical to Native American music. And while you could easily find the Norah Joneses and Justin Biebers, it was also his mission to introduce you to the lesser known Glenn Danzigs and Punky Meadowses (a 1970s favorite of Groth’s that can be Youtubed.)

“I tried to have stuff people couldn’t find in a Walmart or Best Buy. You can get hits at Walmart but you can’t find Albert King,” said Stapleton. “That’s what a record store is all about. That’s what made us cool.”

That coolness Groth to work at the store three years ago, upon returning from a sabbatical in Portland. To be sure, when we say “cool” here we are not referring to blinking neon, blaring music and flashy corporate signage. We are talking an esoteric mix of 1970s band Caravan and Springtsteen B-sides playing over the sound system. Quirky homemade signs with Christopher Walken hoping to thwart anyone with sticky fingers. A “Hot Wheels” display (which were the first to go in the sale), and that unique record store smell, a peculiar mix of vinyl, musty cardboard and nostalgia. Like comfort food for the nose.

“When I grew up, you went to the record store, that’s what you did. It was a way of life,” recalled Groth, who grew up in Boulder. When he took off to college in Iowa, he became unmoored when he realized there

was no record store in town. But dismay soon turned to relief when he moved to Durango in the late 1990s to find Southwest Sound.

“Not only was there a record store, but it was really good. It’s always been really good,” he said.

But, as we all know, the times, they are a changing. In the ever-evolving technology universe, video killed the radio star; the iPod killed the Walk Man; and, most recently, the Mp3 killed the CD.

Stapleton said his high point was 2008 – a lot of good music was out (the aforementioned Norah Jones’ 2007 debut CD, “Come Away With Me,” was his all-time best-seller) and smartphones hadn’t yet exerted their death grip on other forms of musical conveyance. But then the economy went in the tank and this little thing called the iPhone arrived on the scene, with what Stapleton refers to as the “little shot of heroin:” iTunes.

“Suddenly, everything you need is in the palm of your hand,” he said. But it didn’t just turn off the younger generation. It also ate into his bread-and-butter: the Deadheads, skatepunks, festivarians, Parrotheads, headbangers and everyone in between (yes, we’re talking to you, classes of 1984-92.)

“A lot of the older generation stopped buying music,” he said. “Cars and computers no longer even come with CD players.”

He noted he did get a little bump in action with the vinyl renaissance of the late aughts/early teens. And while it was partly a hipster phenomenon, it was also due to the fact that digital music is compressed, taking out all of the nuances, high notes, low notes and rainbow of aural information that can turn an audible feast such as Neil Young or Pink Floyd into a soggy, bland, bread sandwich for the ears.

“A lot of people said this sounds like crap, the sound quality was so much better in physical form, and suddenly vinyl was hip and happening again,” Stapleton said. Alas, the bump wasn’t enough to keep the ship afloat. Despite what some may think, Stapleton said the profit margin in the music-selling world is slimmer than David Bowie’s necktie. Typically, the markup is only 20 percent on new titles, 40 percent on older ones.

If you’re at all good at math, you’ll realize that’s a lot of $16.99 CDs to keep the lights on and the turntables turning. At some point, it’s time to pull the plug on even the noblest labor of love. And Stapleton knows he is not alone in this grim reality of surviving in the Amazon and Sound Cloud age.

“That’s what’s affecting lot of small-town stores. A lot of people don’t realize their convenience and saving a few bucks is putting a lot of people out of business,” he said.

But, in the three days until we mourn the loss of this little slice of local culture, Stapleton wants to party like it’s 1999. And maybe introduce you to your next new favorite artist that you’ve never heard of.

“The more I sell, and the more music I put into people’s hands, the better,” he said.

Although Southwest Sound has been liq- uidating for the last several weeks, it’s by no means slim pickins (which would be a great band name, BTW.) Sure, all the Zeppelin and Pink Floyd is gone. But there are still plenty of musical treasures, Christmas gifts and fu- ture collector’s items to be found lurking in the racks (including a Lenny Kravitz Greatest Hits, a guilty pleasure that was quickly snatched up by this writer.) Here is a mere sampling of some of the store’s unique offerings, as of Monday after- noon. (*Don’t forget to say “shazam” to get an extra $1 off. And if you ask nicely, they will even take the CD out of the plastic case and remove all the annoying plastic for you.) Happy hunting.

Justin Bieber - Canada’s greatest ex- port since the Canadian tuxedo. We were sur- prised to find the Biebs still on the shelf, but according to SW Sound’s Robert Stapleton, a lot of his fans have grown up and moved on to high school. We still love you, Biebs.

GNR “Chinese Democracy” - Axl’s long-awaited return to the spotlight took 11 years and $13m to produce, making it the most expensive album in history. Slash-ess, it was a mild fi- nancial and critical suc- cess. “It’s decent,” said Stapleton. Of note: The Replacements’ Tommy Stinson plays bass – worth the price of admis- sion alone.

Brinsley Schwarz - OK, we’ve never heard of this guy, but Dan Groth likes him. And he should know, he’s a DJ. Plus, just look at that ’70s uni-brow. All. Good.

Neko Case - The best Canadian export since poutine, Neko is sort of the dark princess of indie rock. Plus she is wearing what appears to be lit cigarettes. On her head. That’s bad ass.

Lord of the Dance - Remember when this was all the rage? Mom will love it – trust us.

*Missy Votel has no musical expertise whatsoever. Her favorite band is Journey. So take this with a huge grain of salt. And maybe a shot of tequila.