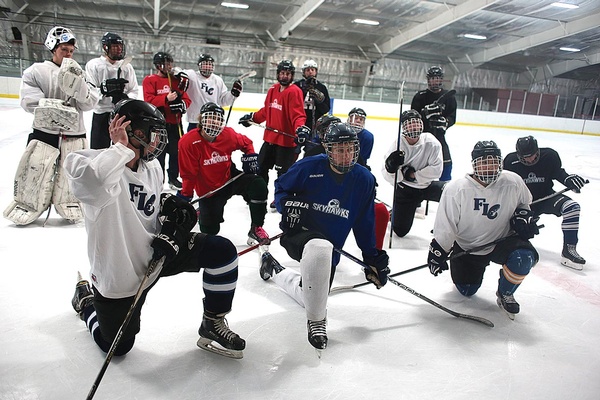 The FLC men's hockey team takes a knee for some chalk talk during a very early morning practice recently. After several years as a bit of a hodge-podge program, the hockey Hawks are coming on strong, ranked 15th in the American Collegiate Hockey Association's Pacific Division. The next round of home games is this Friday-Saturday./Photo by Jennaye Derge

OK, maybe that last one is a bit of a stretch. For now.

But an infusion of new blood and enthusiasm for the school’s mens hockey club could lend some cred to the program, if not a national championship.

Operating under head coach Tim Dionne (with shout-outs to assistant coaches Dave Hytinen and Robbie Morrison), the men’s hockey team is currently basking in a personal best six-game winning streak. And if you’re scratching your head saying you never knew FLC even had a men’s hockey team, not to worry, it’s a relatively new thing. Until about 2011, the team was a self-described “hodge podge,” that played various college games it could scrape together as well as in the Durango Adult Hockey League. There were a few seasons with no team at all. And, up until this year, the men’s team had a prior winning streak of, well, two.

But now, there’s more to get excited about than the chance to catch a bloody brawl. Aside from the aforementioned winning streak, the hockey Hawks are ranked 15th out of 29 in the American Collegiate Hockey Association Pacific Division, of which they are members. Not only is it the first time the Hawks have been ranked na-

tionally, but it’s the first time the team has broken 500, with a record of 24-20. Adding to the momentum, for the first time this year, the students beat the alumni in the annual Skyhawks Cup – handily.

“Being above 500 is remarkable,” said Dionne, who took the helm three years ago.

Fans certainly have taken notice, with as many as 400 showing up for Hawks games at Chapman Hill. But if you come to see the aforementioned “bloody brawl,” you could be disappointed – that kind of hockey is so 1995, and something Dionne has steered his team away from.

“People come to watch the competition and see a team that plays hockey the right way,” Dionne said.

In other words, the tin-foiled knuckles and hockey-shirting ala “Slapshot,” which incidentally turns 40 this year, is passe?. Instead, Dionne instills values like pride, humility, respect, perseverance and character in his players.

“Hockey is not the same sport it was when I was growing up,” said Dionne (who appears to be 40-some-thing, so definitely of the “Slapshot” era.) “I tell my players hockey is a lesson for life. What matters is that they’re solid players and, more importantly, how they take lessons learned on the ice and apply them to life. You’re only as good as your last game.”

I guess you could say it’s a kinder, gentler, more nuanced hockey. Dionne keeps careful track of stats (something known as plus/minus in coaching jargon) to give players measured standards to shoot for. He also holds development camps in places like Santa Fe and Canyonlands, which really have less to do with hockey and more to do with team bonding. But, there’s plenty of hard work, too, with twice-weekly 6 a.m. practices in 10-degree weather.

“The commitment my guys put in is incredible ... to being the very best on and off the ice,” he said. “We as coaches set the table, but they have to eat.”

Dionne also takes time to remind his players why they’re playing in the first place: the challenge, hard work and, most importantly, the pay off. And there’s also reverence for the game. As a wise man once said, “Every time you step on the ice, it’s a privilege.”

“Sometimes, we need to look back at why we enjoy hockey,” he said. “It’s a challenging task. You weren’t born to skate with an 1/8th inch blade on a frictionless surface when it’s 5 degrees out,” he said. “It’ an experience we all share. Camaraderie, friendship – that’s the value more than goals and losses.”

In case you can’t tell, Dionne is passionate about the sport. A native of one of the northern “M” states (Maine) he played as a kid, went on to play college hockey for the University of Maine and later became a coach for an ACHA-level team “back East.” In other words, someone you want coaching your team.

“Hockey’s been a part of my life forever,” he said.

However, when he moved to Durango in 2008, hockey was about the furthest thing from Dionne’s mind. However, low and behold, there was a thriving adult hockey scene here, and it was a matter of hours before Dionne was lacing up his skates. Or in this case, loaners since he didn’t have his here.

“I was here for three days and played my first hockey game,” he said. “We certainly have a unique hockey culture here in Durango.”

In addition to playing Level 1 in the Durango Adult Hockey League, Dionne, who works as a business consultant by day, plays in the over-40 “Geezers with Breezers” league and also refs. It is through officiating games that he got a closer look at the FLC team. Let’s just say he wasn’t impressed – at first. “I didn’t get involved until I really saw some opportunity,” he said. “I interviewed some players and got reassurance that we could develop the program on and off the ice.”

From there, it’s been balls, er, pucks to the wall. Dionne has begun recruiting promising young players, with the hope of selling them on the whole FLC package: higher education, great town, beautiful scenery, tons of outdoor opportunities and – oh yeah – you can play competitive hockey, too.

“Anywhere you can have what the Southwest offers and play hockey ... you can’t beat that,” he said. “We’re trying to build a program that has a reputation in our state. If a kid wants to play hockey and have academics, they can look to this program as a great solution.”

Eventually, he hopes to make the program, which operates on a shoestring, self-sustaining while helping to attract students to FLC in a time of declining enrollment. In other words, if you build it, they will come.

To that end, Dionne has launched Friends of Fort Lewis Hockey Boosters, which will hold its first meeting at 7 p.m., Thurs., Feb. 1, in the Dolores Room in the FLC Student Union. (If you’re busy Snowdowning, but still want to get involved, contact Dionne at tadionne@fortlewis.edu.) The goal is to help raise not just money but momentum around the program.

“I dream big,” he said, “We need to capture the resources that are out there. If people believe hockey is a valuable asset to the community, I hope you’ll join me to help this program grow and move forward.”

He also envisions bridging the gap between the program and the Durango hockey community, as well as the community at large. With more than 500 adult rec league players spread out over various levels, he envisions FLC becoming a leader in the local hockey community. He also hopes that building the college program will, in turn, help boost the youth program, which hasn’t quite caught fire like the adult league.

“We feel we can be a major pillar for hockey on all levels in Durango and continue to develop and bring the sport to a new level,” he said.

To foster that connection, Dionne will be hosting the first-ever Stanley Keg Championship adult hockey tournament fundraiser in March. “We’re gearing this as a celebration of hockey in Durango,” he said, adding the day will include music, food and drinks. Players will first be drafted to teams of eight, with teams playing round robin 20-minute run-time games over the course of 12 hours. Although only open to levels 1-3, Dionne said if there’s enough interest, the lower levels will be added next year and the tournament expanded to two days.

Add to this a partnership with XRock for sponsor radio spots and a very strategic deal with A&L Coors (BTW, no beer is served at the FLC games – sorry) and Durango is practically starting to look like Hockey Town, USA. With better hair.

“I want to bring a program that people will want to be proud of,” Dionne said. “It all goes back to pride.” 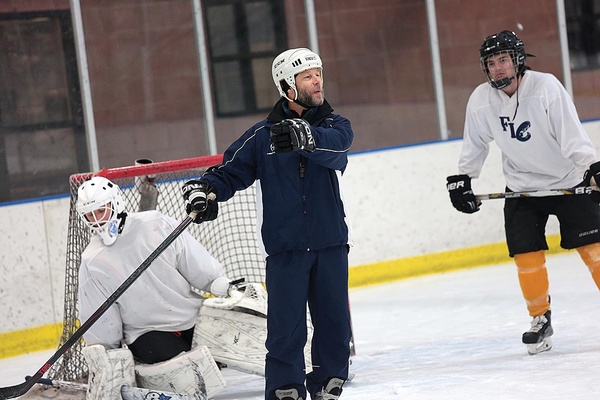 Tim Dionne offers some pointers. He likes to use a new car analogy with his players: he gives them the keys, how they drive it is up to them./ Photo by Jennaye Derge 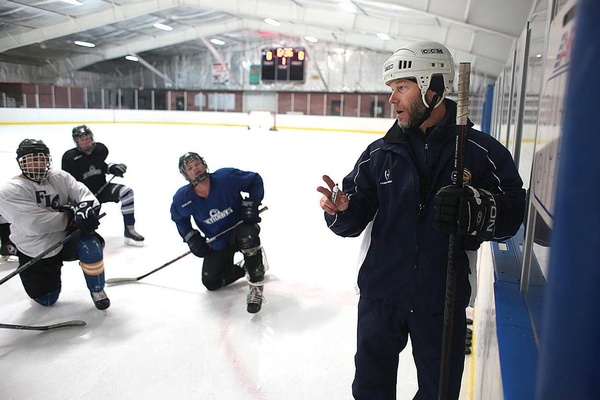 Tickets: $5 gains entry to both games; available on campus or at the door