The path of the ancients 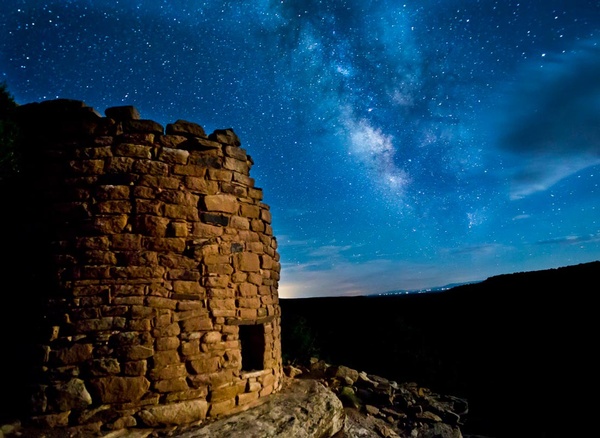 When I retired from teaching after almost four decades, I felt a sense of urgency to retrace the reasons why I had moved here so many years ago. My thoughts went back to my first encounters with the West. I remembered how I was awed by the sheer expanse of the land and endless horizons. I needed, desperately, to once again commune with the natural world, to visit pristine and uninhabited areas. You could do that in the “Land of the Ancients,” the track of lands that comprise the Four Corners region and encompasses three great tribal nations. I was anxious to head out to this less familiar terrain, unfenced and filled with unforeseen adventures amongst cliffs, canyons and the ruins of ancient civilizations.

Each time that I had hiked into the land of the Anasazi, I was always transformed by the light that complemented the enormous cliffs of sandstone. There was a readiness, without guile or calculation, that led me on to be engaged in the beauty of the land and its gifts. I stood upon the edges, arms raised before the sun, reached out with joy, and casted a shadow toward the distances that could never be touched. I could only transform the visions of the present moment into a memory by altering something within me, weaving it into the pattern of present existence, dissolving the worries of my tomorrow.

It was this communion with land that revitalized me and brought me back to understanding the importance of wilderness and conservation. If I wished to be let in on the secrets of life, I had to be mindful of the great melody of life; its scents, feelings and needs. I had to be aware that my insignificance was a prerequisite to humility. The immersion into the “quiet” led to quietude, and the dawns and dreams were voices that completed the song of knowing as I was led by some inner guide to hike those massive cliffs and deep, thirsty washes.

Visiting a ruin was a special experience. I sat outside the dwelling, careful not to trespass on the past, for there were spirits here that must be honored and respected. I imagined the hands that carefully carried and positioned stones, building those centuries-old walls. I imagined a stew being boiled in a corrugated a pot. I heard women laughing while children scampered near warming fires. I was mesmerized by my imaginings. Gestured back to reality by a passing crow’s caw, I began to more clearly understand that life pushes and urges us forward, that it is governed by the necessity for survival. There was a conscious fate that I could only speculate, a wonderful destiny of history that played out here so long ago. I felt honored to have witnessed this place, this festive gate of return that marked a hard life. I was reminded that we do not acquire wealth by hording possessions but rather by letting everything pass through the journey. This was the message of the cliff dwelling. It could be said that owning property allowed one to be governed by want. There was no want here, just the artifacts of perseverance.

I rose, took my walking stick and headed down the canyon. A few birds whisked by, chattering their annoyance. I remembered, years ago, giving a tiny bird a little water, hoping I had kept it away from the edge of death. It was an act of compassion; of contrition you may say, knowing its little heartbeat was as valuable as mine. The land evokes such memories. I was reminded that fate, rejection and hardship were not entirely without prospects; somehow something of value was to be gained from the toughest times. I headed for the next ridge, swimming in thought and looked back at the ghostly outline of a forgotten community and all that it became.

Years ago, I worked as an environmental consultant in the most densely populated area of our nation, New Jersey. I remembered being solicited by the EPA, after working for a well-respected and honorable conservation firm. Something told me to reject the offer. I headed for Colorado the following spring. I have come to believe that everything that happens to us, whether we desire or solicit it, is somehow governed by our intuition, though I didn’t know it at the time. I left because of an inner voice or some unconscious beckoning that had haunted me. Walking along the pin?ons and cedars, I was grateful that I listened to that inner voice or calling, for it had given me an abundance of life and a depth of experience. As I hiked back to my campsite, I was reminded that life must be taken in and honored in its entirety. I guess I had, somehow, followed the Path of the Ancestors. There were no detours.

History on the chopping block

Canyons of the Ancients is currently on President Trump’s list of 27 national monuments under “review.” Designated by President Clinton in June 2000, the nearby monument covers 178,000 acres including Sand Canyon, the Anasazi Heritage Center and more than 6,000 ancient and irreplaceable Puebloan sites. To comment to the Deptartment of Interior, visit www.regulations.gov (the link was not working as of press time) and enter “DOI-2017-0002” in the search bar. Or mail “Monument Review, MS-1530” at U.S. Department of the Interior, 1849 C Street NW, Washington, DC 20240.

You can also comment via the San Juan Citizens Alliance website at www.sanjuancitizens.org by clicking on “Public Lands/ Canyons of the Ancients” tab.