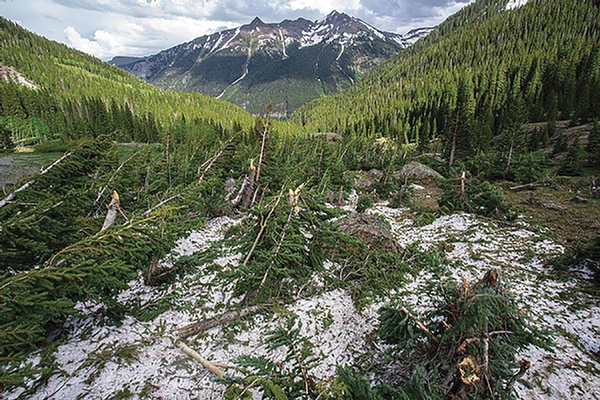 A debris field outside Silverton earlier this summer. Over one two-week span last March, the CAIC recorded an unprecedented 87 avalanches in the 4-5 category, with 5 being the most destructive on a scale of 1-5./ Photo by Stephen Eginoire

Colorado’s 2018 avalanche season was bad, and scientists now say it’s even worse than they thought. As this year’s snow season gets under way, Ethan Greene, director of the Colorado Avalanche Information Center, spoke to Colorado Public Radio about the historic season that was and what might be in store for Colorado this season.

CPR: Last spring there was an unusually high number of avalanches being triggered. But since then, you’ve been looking at satellite images and you’ve been on the ground in these areas. What have you found and just how unusual is it?

Ethan Greene: We had a really unusual cycle in early March last year, and at the time we knew it was a very unusual event because we were seeing really large avalanches and a large number of these really big avalanches.

Over the summer, we’ve gotten a chance to look at some other parts of Colorado, places that are a little harder to get to in the winter. And it’s really just reinforced that idea that we had a widespread avalanche cycle that really destroyed timber and changed the nature of the terrain in some places.

CPR: And so no one has seen anything like this before?

Greene: Well, we certainly see avalanches every year in Colorado, but the number of large avalanches in a small timeframe – and really the size of some of the avalanches that we saw – is unprecedented.

One of the ways that we look at the size of avalanches, as we try to track them, is looking at the destructive force that these slides can produce. And we rank them on a scale from 1 to 5, with 1 being small and 5 being the largest. It’s pretty unusual for us to see avalanches in Colorado at that upper end of the scale. In Colorado, we recorded 24 avalanches in that 4-5 category in the eight years previous. And then, just in this two-week period in March, we recorded  87 avalanches in that size range. CPR: Wow.

Greene: Yeah, it’s impressive. And like I said, as we’ve seen more of the terrain, some of the really deep backcountry areas in Colorado over the summer, that number is growing. But we’re still sort of processing some of that information.

CPR: And there was a combination of three weather events, is that right?

Greene: Yeah, a big cycle like this really doesn’t happen from one event. And in this case, there were three events over the course of the whole winter that led up to this event in early March.

The first was early season snow. We had snow on the ground in October, really covering slopes that face every direction near and above treeline throughout Colorado. And that snow turned into a very weak layer right at the bottom of our snowpack.

And then, as the winter progressed, we had lots of snow events but not really big ones in January and February. And that built a very strong layer of snow on top of that weak layer.

And then came March, where we had lots of precipitation in a short amount of time and that just overloaded that snowpack and caused it to break. And when it did, it broke really far and wide.

CPR: It is early December, and we’ve already had a number of snowstorms. Do you think that this year will be as bad or possibly worse than last year in terms of avalanches?

Greene: We’ll have to see how the winter plays out. Certainly, the safe forecast is to say that no, it will not be like last winter or certainly not worse because that is an extremely unusual event. But the three different periods of the winter that led to this cycle – the first one being snow in October to form a weak layer – that is exactly what we’re seeing in the mountains of Colorado right now.

CPR: What are the consequences of all the avalanches from last season? We know several people died. Are there other consequences?

CPR: Is this at all connected to climate change?

Avalanches in Colorado are really weather-driven, and so these are more sort of short-term weather effects. And as we talked about, this cycle really was the combination of a number of events over the course of the winter. So, we certainly don’t know or have direct evidence that this cycle is tied to climate change. But there is a lot of climate research that points to a changing trend in weather in the mid-latitudes and an increase in precipitation and the volume of water in some of these wet storms.

CPR: What advice would you give someone who is playing around in the snow in terms of watching out for avalanches?

Greene: The most important thing to do is to know what the current conditions are, so you can be prepared for what you’re going to see out in the mountains. And the best way to do that is to get the current avalanche forecast at colorado.gov/avalanche. And a little bit of education can also be really helpful. So getting a little bit of training, whether that’s an online course or looking at some tutorials or videos online or taking an evening class or a multi-day class. And then the last thing is to make sure that everybody in your group has proper rescue equipment – that’s an avalanche transceiver, a probe pole and a shovel.

To read this story or more from Colorado Public Radio, go to www.cpr.org. 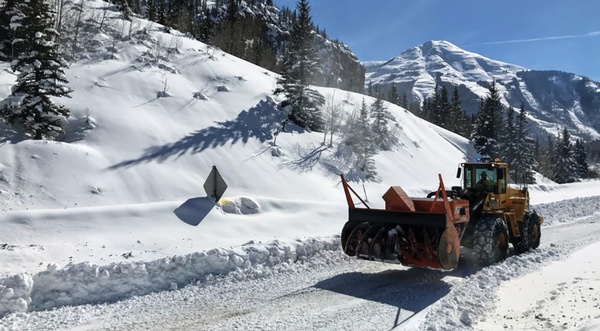