This man can (still) break you
At 55, Steve Ilg is still crushing it and helping us all channel our inner warrior 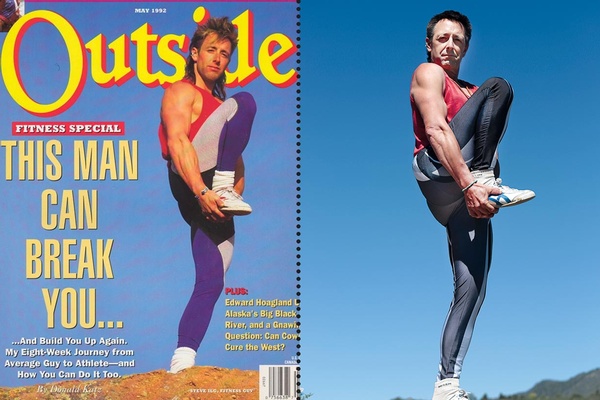 Ilg, then and now, sporting almost the exact same gear, minus the mullet. Which can – and should – never be duplicated./ Photo by Jennaye Derge

Spartacus. Sun Tzu. William Wallace. Alexander the Great. Ilg the feeble? It might not have the same soul-rumbling gong to it, but it’s true: local super-athlete Steve Ilg, who refers to himself as “feeble ilg,” is just as much a warrior as these other historical studs. And guess what, says Ilg, so are you.

The svelte 55-year-old adventure athlete, author and coach has been touted to excel “in more sports than most people ever try,” and was deemed a “multisport mutant” by Outside magazine, where he’s the only athlete ever to grace the cover twice. Ten years after being

featured in an article entitled “Aged to Perfection,” feeble ilg has yet to hang up his six-pack. Rather, he spent the ‘17 winter season beating competitors a third his age, making the podium at 100 percent of his events. Let’s just say he’s one “old” man who didn’t get fat over the winter.

Those events weren’t just snowshoe races – which he’s known as the founder of the Winter Warrior 10K – either. Alas, feeble ilg competed in five other disciplines from distances of 5 to 50 kilometers: freestyle ski, classic cross-country ski, ski mountaineering, biathlon and fat bike.

The cherry on top was a third place overall finish and first place win in his age group at the Tellurando, his first real ski mountaineering race. Ilg’s a machine, no doubt, but his ability to swing between fast-twitch and endurance is what makes his Herculean feats even more impressive.

“Ilg is just a paltry practitioner of Wholistic Fitness R,” he explains. “I reckon the Path works when one works the proven Path.”

Yes, feeble ilg refers to himself in the third person and prefers lower-case letters, and this chosen “Path” he speaks of is his trademarked 35-year-old training program, Wholistic Fitness. Forged from his days working as a trainer at Farentino’s Gym in Boulder, Wholistic Fitness has shaped Ilg’s body to perform at peak by incorporating strength and cardio training mixed with yoga and meditation, capped off with mindful nutrition.

What kind of nutrition do superhumans eat? Ilg and his tribe use supplements as the base of their diets. Surprisingly, they’re not scared of gluten, sugar, processed food, alcohol or battery acid.

“We’re like peacocks,” says Ilg. “Peacocks are admired because of their brilliance of colors, and they are so colorful because their digestive chi is so strong.”

Since he founded Wholistic Fitness, Ilg has not only won more than 200 races in dozens of sports, he’s also coached thousands of people, from Olympians to soccer moms, to strive for improved sport performance and spiritual development simultaneously.

“While you work out, you also work within,” says Ilg.

Formally trained in Tibetan Buddhism at the university level, Ilg believes that, in this life, he’s an athlete, and the race is toward enlightenment. He sees it as his sacred duty, the athlete-warrior’s obligation.

“We have to, because the intellectuals aren’t doing it; they gave us Trump,” he says. “We have to rise. That’s why we race.”

Warriorship is our birthright, says Ilg. It’s just that nowadays most of us have to go looking for our inner warrior. This is why we toe start lines, says Ilg, to see what happens when the gun goes off and things get uncomfortable. What happens when you can’t take another inhale? You must practice breathing, says Ilg.

“Breathing fires up the body’s energetic pathways and turbocharges your efforts,” said Ilg in the “Aged to Perfection” Outside article. “Overcome your fear of the esoterically weird and learn to breathe.”

Durango’s ambient cocktail should make breathing easier, says Ilg, because as you breathe, your breath creates friction, and the turbulence transforms the air into ether. Ilg believes that Durango’s ether is extra special, probably thanks to so many healthy athletes breathing hard on the trails around town.

“I’ve seen some beautiful places but nothing really vibrates like the prana of the high desert and mountains here,” says Ilg. “Every breath is profound nourishment.”

His intro to Durango’s ether started in the San Juan National Forest near the Ilg home at Junction Creek. In the 1960s, Ilg would run through the woods, shooting his bow and then timing himself to see how long it’d take to find the arrow. His pet wolf, Apache, would race alongside. Ilg also played ice hockey and then found skiing, competing on the alpine team and serving as an alternate on the Junior National Nordic Combined team.

“I am fantastic at water sports, as long as the water is frozen,” laughs Ilg. “The moment it goes back to liquid state, I just sink.”

Ilg moved to Boulder for his senior year of high school, graduating in 1980. He started taking cellular biology classes at CU but was more focused on his climbing career. When the snow started melting in the high country, he and fellow dirtbags would boil a big vat of potatoes, put them in the pickup and drive to Yosemite to climb all summer. The more time he spent moving in the mountains, the more Ilg severed himself from formal education, taking instruction instead from “rock, snow, ice, wind, nature.” He eventually stopped going to college but would still learn life’s out-of-the-classroom lessons.

Ilg was exactly as you’d picture a 19-year-old climber: tan, unruly hair, so Colorado. One cold day in early winter of ’83, this specimen and another of his kind headed out to climb the notorious “Diamond,” aka, the East Face of Longs Peak. As the wind ripped and weather rolled in, Ilg moved up the wall steadily, until he unleashed a rock the size of a smart car. Down Ilg fell, smashing onto his back, where a couple water bottles attached to his pack exploded on impact. The internal engine sputtered. Ilg gasped, finding air. He was in pain and couldn’t move his leg without great difficulty. He didn’t know it yet, but he’d broken his back and shattered his pelvis.

“How exactly we got me off that ledge, rappelled to the snowfield below, and hiked 10 miles out to the car, I don’t know. All I can recall is searing pain and my attempt to rise higher than it.”

When he got back to civilization, Ilg sought alternative remedies for his injuries, spending months seeking answers and undergoing eclectic healing practices. But the prognoses were never good, and the noise was much, so Ilg turned inward.

“When I couldn’t move the left side of my body, I set goals for myself,” he explains. “I would say, ‘I won’t go to surgery until I can’t get into a full lotus.’ That would create space. I just kept creating different cairns along the journey, meeting the breath, rewiring the chakras. An injury must be accepted as a guru for healing to happen.”

He deepened his meditation practice, where he envisioned strange yoga postures, received mysterious mantras and “etherically downloaded” new training paradigms. He learned that one must flip his or her focus when injured. For instance, since he was injured in a yang, or more masculine, activity (that is, strength or cardio focused), then he was meant to heal by cultivating the yin of his training, that is, yoga, meditation and nutrition.

This approach not only brought feeling and movement back to his leg; it also produced a comprehensive training effect that Ilg says would eventually allow him to compete at even higher levels than before. More than three decades later, he’s still never had surgery and claims to rarely get sick.

“I’ve never had insurance,” says Ilg. “I like to live life di- rectly. I don’t want to miss the lessons.”

In 2007, another life-teaching would unfold for feeble ilg. He had just left Los Angeles, where he’d moved 10 years prior because his teachers told him he was “too attached to the mountains.” He relocated to Flagstaff with his partner at the time, actress Joy Kilpatrick. The two free spirits learned they were going to have a baby girl: Dewachen, “Dewa” for short, which means “heaven” in Tibetan.

After Dewa was born, Ilg thought, “The only way I’m going to pull this off is to get her home to Durango.”

So Ilg moved back to Durango to start the ultimate adventure of his life: raising a kid.

“Everything that comes out of her mouth is either wisdom of the dharma or absolutely hilarious ... or both!”

Like her dad, Dewa competes in multi-sport disciplines, winning often and charging always. She’ll be the focus of his next winter season, when she receives her fifth-grade ski pass, which means free skiing at most Colorado resorts. So instead of racing full-tilt, feeble ilg has plans to quest with his little warrioress in pursuit of the holy grail of powder.

“This will give all the youngsters I kicked ass on this past winter a chance to regain their confidence,” laughs Ilg. “Then? Yup. ilg will be back on the Nordic circuit. Have fun, young guns, while you can!” 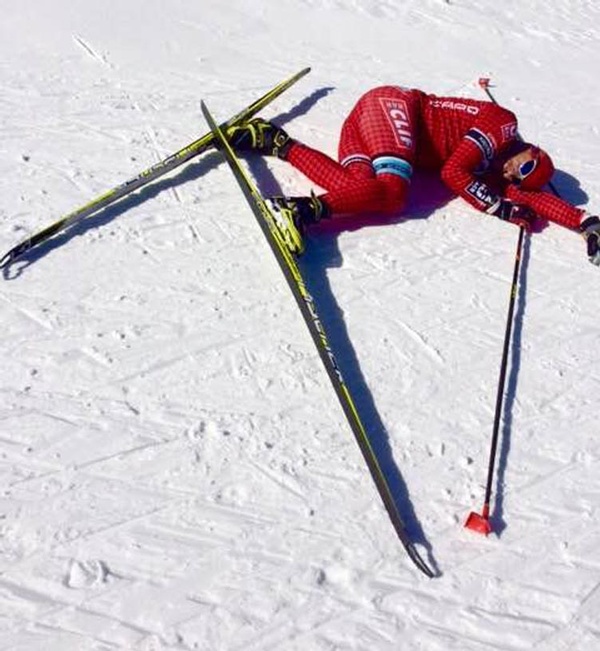 Ilg in utter collapse after spanking some younguns at a recent Nordic event./ Courtesy photo