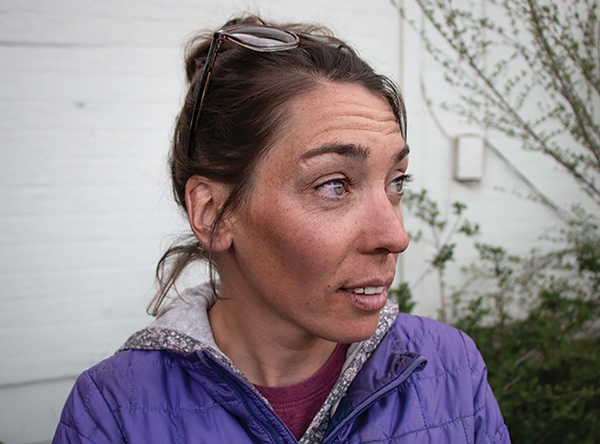 I arrived in Durango almost seven years ago with my now-husband, a cat and a few cooking utensils. We drove into town in a GMC Yukon, which doubled as our house. This was before #vanlife existed, or at least before we knew it existed, and the fact that we had been camping and working out of the back of an SUV for a few years seemed both avant-garde and, well, cheap. It was early fall when the mountain frost ushered us off Wilson Peak and onto the Million Dollar Highway to look for a shelter without wheels in Durango. Now, two kids, six rentals and a handful of jobs later, I’m still here.

My Durango migration story is not an uncommon one. This place is full of vagabonds and delightfully confused 20-some-things looking for adventure while remaining First World. Throw in some recreating yuppies and a rural crowd, and Durango is the equivalent of any Colorado town out of view of the I-25 corridor. While these identity assumptions include elements of truth, I wonder if attaching such stereotypes is endearing or simply lazy. By equating Durango with “another mountain town,” what life are we skimming over in the valleys? What diversity right outside our front doors are we tragically failing to recognize? What would we find if we look further than the kayaks being carried or the SUVs in front of mansions? In Localphiles, I endeavor to take an authentic look beyond the Durango “norm” and solidify the roots of this community through the people I meet.

Each month in “Localphiles,” I will interview a member of the community to celebrate the power of social interaction and discuss and document the fascinating lives I encounter here. So without further ado, here is the first profile in the series: Kylie Krauss.

Kylie Ann Krauss grew up in Cleveland and moved to Durango in what she thinks was 2011. One of her college friends was working for a landscaping company in town and convinced her to visit during summer break from graduate school. She decided to stay in Durango after that summer, and she now spends most of her time mountain biking, partaking in other general outdoor activities and running her own landscaping business.

I began working with Kylie five years ago and feel fortunate to call her my friend. After spending countless days hauling rock and working in garden beds with her, I figured I knew Kylie pretty well. Still, I thought I could practice my interview skills and profile her as a “typical” Durangoan.

At our meeting last spring at North HomeSlice, I found Kylie sitting at a patio table, writing in a pile of notebooks. She wore Chacos on her feet and a few jackets on top to combat the brisk air. Kylie stands a few inches shorter than my 5’7”, but don’t let her small frame fool you. I have seen her move countless wheelbarrows of rock and mulch and carry flagstones half her size. Oh, and she is some sort of mountain bike guru. I am not even sure what mountain biking is, but she is really good at it.

I bought Kylie a beer, turned on my recorder, and we started laughing uncontrollably.

“Don’t worry, I am way more nervous than you are,” she told me.

When I think of Kylie, “nervous” is the last descriptor that comes to mind. She is always the first to strike up a conversation or accept a challenge. But we weren’t in the workplace, on a ski slope or on a bike ride. We were staring at one another, sitting in the shade at a pizza joint, talking about her.

Kylie’s parents divorced when she was young. Her father cheated on her mom, and her mom’s father cheated on her grandmother. This has all the makings of a melodramatic, good ole’ American, post- WWII family saga; Kylie’s grandmother found out about her husband’s infidelity, then proceeded to iron his shirts while tears streamed down her face. Kylie told me this story with a look of sadness and disbelief: sadness at the fact that her mother told her this story instead of relaying her own emotions; and disbelief at her grandmother’s resignation to a life of mistreatment based on false expectations.

As a kid in Cleveland, Kylie started biking as a way of transportation – her mom and older brother usually claimed use of the family’s one car. In the open space near her home, she explored as much of the natural world as one can in a Midwestern city. As the painful grip of her teen-age years took hold, Kylie turned to biking as a source of solace and stability. By the time high school graduation rolled around, Kylie was ready to go anywhere but Ohio, and she attended college at Warren Wilson in North Carolina, majoring in biology.

Durango often seems synonymous with mountain biking, and Kylie is mountain biking royalty. Before I knew her, I heard town folklore of her bike racing exploits and victories. I always figured Kylie was an adrenaline junky who liked competition and fitness. During our interview, I wanted an official answer: “Why do you like to bike?”

Without looking away or taking a moment to think, she answered, “You know as a kid, when you got to go out for recess?”

Yes. It’s freedom. When Kylie is on a bike, she is free. A human and her bike, one unit, riding into the sunset. Or sunrise.

The evening chill crept up on our meeting. Kylie rubbed her hands together and reached into her pocket for a can of chewing tobacco. She packed some into her lower lip, a sight that has become endearing over the years.

I asked her if she liked living in Durango. She does. She likes being so close to outdoor recreation opportunities, and she likes her work. With some amusement in her voice she added, “Some people are born where they are supposed to be.” Kylie wasn’t. It took her a long time to get here; she had no family grooming her for races or guiding her through steep terrain. She is the definition of “self-taught.”

Kylie takes full responsibility for the path that brought her here, yet she remains humble that she has no idea where that path will lead.

Our interview began to lose focus as we discussed the pros and cons of living in Durango and then started talking about our cats. I asked Kylie what she was going to eat for dinner. Burritos. What book is she reading? The Big Divide by David Lavender. We thanked each other for being friends by laughing and hoping for good weather. Then she took out her planner and started asking me what dates I would be available to work.