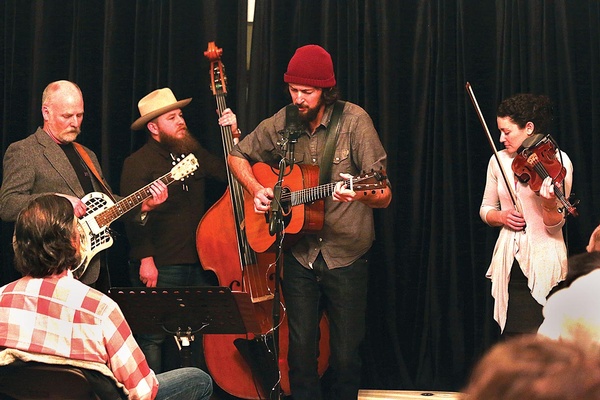 When you go to the new music venue in town for the first time, and you end up staring at a warehouse up North Main, you’re certain you must be in the wrong place. Where’s the marquee? The grand fac?ade announcing the entrance? Where’s the glitz and glam, or the modern edginess, or anything at all to indicate that artistic magic is about to happen?

I don’t believe the exterior of the Red Scarf Studio Listening Room (121 W. 32nd St.) is meant to exemplify McCarson Leigh’s (formerly Jones) philosophy behind this intimate, once-a-month music venue. Though in a roundabout way, it does. It’s the music and the musicians that matter most. Forget all that other junk tied to the performance industry today.

The interior, on the other hand, is every bit deliberate.

In an open room just large enough to seat 40 people, there’s tea, coffee and pastries – help yourself. A chandelier is hoisted to the ceiling, and velvet drapes veil the green room behind the band’s setup. You can explore the art gallery on the walls (currently displaying Leigh’s own photography; this is her studio, after all, when it’s not a concert hall). The candles around the room invite you to get comfortable while you await

the show. You can’t help but feel tended to in this space. Loved, really.

All this special treatment is part of Leigh’s vision to put audiences in direct, intimate contact with artists, and vice versa.

“I feel it’s important to treat musicians well, help them feel good, honor them, value them, and let them get out there and just see what they do best, which is delivering their work to an audience who has paid to see their performance,” Leigh said.

As the name suggests, The Listening Room is primarily about paying attention to the music. That right there sets it apart from many other venues in town, which also serve as bars, restaurants and hangouts, where the music is just the sideshow. Something to be talked over, and occasionally applauded.

For local and regional musicians, the Listening Room is a chance to put themselves and their art on full display without distractions.

“I think the audience gets the feeling of a one-on-one situation with some really talented people,” Leigh said. “There’s that opportunity to get to know them better. I think in a bar setting, you got your cocktails, you got the band playing, listening is your own prerogative. But at The Listening Room, it’s the band’s prerogative to be there with you.”

I attended the debut show with the fledgling band loki moon, a duo with Ashley Edwards (long known as the frontwoman for Hello Dollface and Ace Revel) and Davis Jones. Their current project is a radical entrant to the Durango scene – they describe their multi-instrumental acoustic/electronic music as “alien lullabies mixed with drunken sailor beats” – and The Listening Room gave them an opportunity to experiment with their sound for a rapt, sold-out audience.

“It was more intimidating than I would have imagined,” Jones said. “I noticed during the first couple songs I was short of breath just because it was such an intimate experience. But, it went from being super uncomfortable at first to extremely comfortable by the end. It was probably one of the more

comfortable shows that I’ve ever played.” Edwards put her own impression more directly. “No TVs,” she said. “No drunks. People want to hear music.”

The show offered the audience a truly connected experience with two vulnerable musicians. It’s inspiring to sit within mere feet of skilled artists immersed in their flow, and it’s humanizing to see their slip-ups too. It’s all part of the experience, and the dialogue between loki moon and the audience reached deep beyond the between-song chatter.

“There could just be a two-way exchange,” Edwards said. “Even though the audience is just sitting, they were there to have some kind of experience. It was so intimate that everything was felt between both sides.”

Not only is the connection between audience and performer a rare experience, but so is the opportunity for musicians to get paid decently for their time. Talking about money tends to make people uncomfortable, but Leigh, a champion of artists of all stripes, is putting that subject right out at the fore: Artists deserve to be paid for their work.

So she designed a setup where there’s really no bullcrap hoops for artists to jump through. No playing for tips. No playing for a house rate or for a percentage of the bar. Straight up, the artists go home with 70 percent of all ticket proceeds. And she doesn’t cut corners to make it happen – the green room sports the musicians’ favorite food and drinks, and the audience is treated to quality sound from Scott Smith at Sound-smith Audio.

“For me, it’s a collaborative philosophy,”

Leigh said. “I have a space. You come play, you set the ticket price as a band or solo musician, and we’ll both media-blast this and fill the seats, collectively. I like that because it’s artists having some responsibility and control over what they want in their pocket when they go home at the end of the night.”

Edwards acknowledged that booking gigs works a bit differently in the Southwest than in other parts of the country she’s played, but even so, The Listening Room’s model stands out. “I feel like ... it’s a whole different mentality of how to value music in general,” she said.

Edwards and Jones see the potential for this to have a ripple effect on the Durango arts scene, as well.

“There’s a lot of entertainers here, and this gives a space for artists to step out and experiment,” Edwards said. “The trickle-down effect will elevate other people wanting to be authentic.”

Jones agreed. “I think people are definitely craving authenticity,” he said. “No matter what it is or what facet it comes out in.”

But let’s put all the philosophizing aside for a moment. That’s the clockwork that makes The Listening Room tick. But when I was absorbing loki moon’s performance, I wasn’t thinking about how my ticket was supporting the artists. I was riveted, listening to a show unlike any I’d ever heard, in the kind of room where I might someday brag about I-saw-them-when.

The joy was evident as loki moon greeted the audience after the show.

“It reminded me much more of a symphony setting, where it’s just expected that everyone’s attentive,” Jones said. “At a smaller scale, but it still is wonderful to have that type of attention to what you’re doing, not just feeling like a piece of meat on stage going through the motions.”

And for all the details that make a concert at The Listening Room so special, I can’t think of a higher compliment than what Edwards observed that night. “I didn’t see anyone on their phone,” she said. “And that was awesome.” 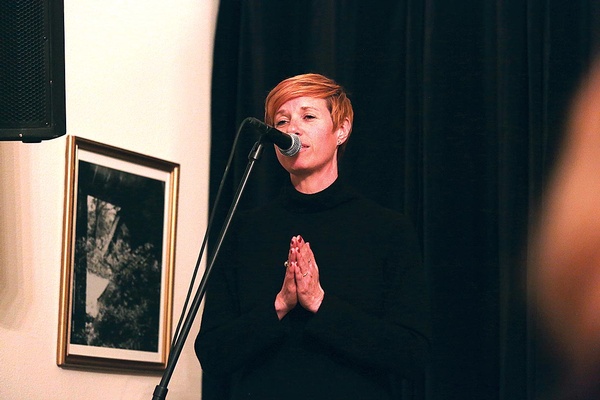 Leigh introduces the next act at her newly opened Listening Room. The space is already booked through the end of the year./ Photo by Jennaye Derge

The Red Scarf Studio Listening Room has at least one concert scheduled each month through 2018. Upcoming shows include:

For info. or tickets, check out Red Scarf Studio on