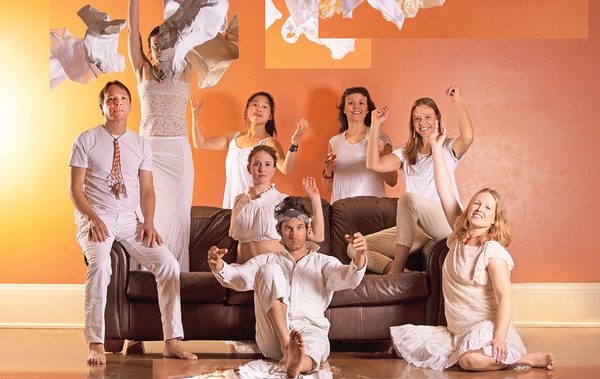 20MOONS dance company tackles the question of truth in a contemporary, cutting-edge style in its newest performance./Courtesy photo

Art is often meant to tackle the big questions of existence. Who are we? Why are we here? What’s the meaning of it all? The answers, of course, are less important than the process of asking the questions themselves. And 20MOONS dance company is taking on one of the Big Unanswerables – What is  true? – with its upcoming performance, “Between Vigilance and Sleeping.”

“The show is this continuing contemplation and deepening of the question,” Jessica Perino, co-artistic director, said. “It’s less about the answer and more about the act of questioning and searching and exploring.”

The choice of deep question for this show is far from random. In the fall of 2018, the dance theater  company hosted a community performance art event called “What is True?” where, for 38 consecutive hours, Durango denizens delved into the question in the Durango Arts Center gallery. There were no direct conversations between participants, and the 20Moons cast members didn’t hold dialogues with anyone. But nonetheless, about 250 people addressed what is true through movement, speaking, sitting in silence, sleeping, writing on the walls, and witnessing others in that space.

“We were really inspired by everybody who came and offered their thoughts,” Anne Bartlett, 20MOONS’ other co-artistic director, said. “The papers that were on all of the walls were completely full of writing and drawing. So we wanted to use that as a springboard for this show.”

Now those who are familiar with 20MOONS understand that their style of contemporary dance theater is constantly growing and changing (thus, making it contemporary). It’s a cutting-edge experience often reserved for larger metropolitan art centers of the world. For those who are less familiar with the company, or with the art form, the “theater” component has much more to do with performance quality than with common theatrical structures. “Between Vigilance and Sleeping” doesn’t have acts or a plot, per se; rather, it uses music, spoken word and dance to journey into the human experience.

Still not sure what to expect from the show? Good, one might say. It’s meant to be experienced more than understood – much like the big questions themselves. But if you’re still trying to wrap your mind around dance theater, it might help to understand it as a multidisciplinary art form.

“I don’t just have to dance,” Perino said. “I can use any means necessary to explore or share a message or ask a question. There’s so much freedom and excitement in that potential. It really opens up collaboration amidst friends and community members.

It’s really exciting to work with visual artists and musicians and writers and actors. Why limit ourselves?”

Perino explained that she and the rest of the cast gathered deep impressions from witnessing and sharing space with the community during “What is True?” The company members brought their individual impressions together in the 20MOONS rehearsal space and began collaboratively shaping the then-undefined performance to come.

“It’s interesting to see how (those impressions) are playing out in the work that we’re creating now, because we weren’t explicitly bringing that in,” she said. “But it’s coming in anyway as we’re creating the show. I’m doing a lot of photography and  video work with the scrolls to project in the show, and I’m realizing how much all those impressions were collected by the people writing. It’s all in there.”

The words recorded on the wall-mounted scrolls are also serving as inspiration for the show’s musical directors and performers, Jeroen van Tyn and Jon Bailey,  who are playing what Bartlett calls “soundscapes and compositions” throughout the performance. The lyrics are all coming from the guests’ words written on the scrolls, and other writings are being spoken by cast members. Still other pieces of spoken word performance are poems written by the cast and inspired by their impressions.

In these and other ways, “Between Vigilance and Sleeping” represents new directions for the dance theater company. This should come as little surprise given that for seven years now, 20MOONS has thrived on creative self-expression and pushing its own boundaries. For instance, the company often performs in nontraditional spaces, and this one, on the Main-Stage Theater at Fort Lewis College, is an exciting exception to that rule. For once, the cast isn’t having to create the physical space from scratch.

“I feel like we keep coming closer and closer to the heart of who we are, in terms of how we work with the elements of words, texts, music,” Perino said. “It keeps getting more refined and clear. This is a show where we’re working more closely with poetry than we ever have, and also with a lot of really developed choreography. A lot of our shows are improvisational, and this is a highly choreographed piece in comparison to other shows we’ve done.”

After seven years of co-directing shows, both Bartlett and Perino are finding themselves continually surprised by the process. Bartlett explained how they have made a conscious decision as directors to be open to the unknown and allow ideas and input from everyone in the company when developing a performance. She feels the company thrives on inspiration and allowing the mystery to work through them, because the right things always emerge in the end.

Speaking of working with the mystery, Bartlett admitted that even with the show opening this week, it’s not yet complete. It can’t be, she said, until it’s performed with an audience.

“The last piece is when the audience comes,” she said. “Our pieces aren’t complete until the audience arrives, because a big piece of it is that interaction and getting the feedback and sharing and feeling the audience’s response. It’s not done yet. It’ll keep evolving as we get people to the show.”