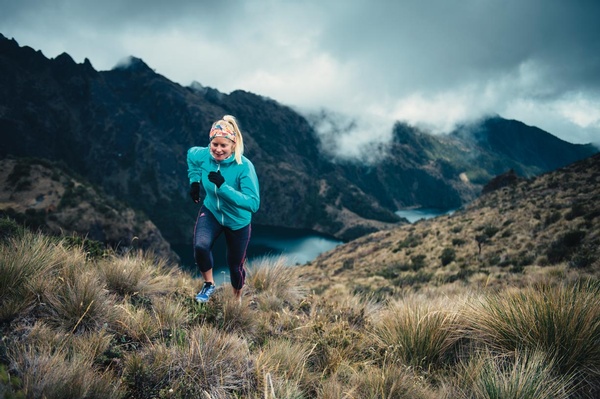 Spring is in the air, which means so are the most pressing decisions for many a Durangoan: bike or skis? River or singletrack? Crack climbs or corn couloirs? And enough with Euphoria; when does Mexican Logger come out already??

The struggle is real, and the flames of these First World problems will only be fanned when Backcountry Experience’s Women Outside Adventure Forum rolls into town next week. Taking place March 28-30, the forum will grace several venues in town, bringing with it the soul-stirring breeze of inspiration that’ll have us all reaching for topo maps in dogged determination to create more adventure in our lives.

This year’s presenters aren’t coming just to talk about how true-to-life their Instagram feeds are. They’re also bringing stories about overcoming challenges, fighting injuries and illnesses, surviving rape and cancer, and the not-so-glitzy sides of being an athlete, activist, ambassador or entrepreneur in the outdoors industry. Because nobody is living the dream without a few scars to show for it.

A few sunsets just for you

The second-annual event kicks off Tues., March 28, to the lilting laughter of the canyon wren with Hilary Oliver’s award-winning short film, “Being Here.” A Denver-based free-lance writer, Oliver is currently wrapping up the manuscript for her first book, and, as you’ll learn watching her poem come to life, trying to make more time for the wild.

Oliver knows that to do her line of work, she either needs to be meeting people who are doing interesting things or doing those interesting things herself. She has to “live some stories” so she can keep her work fresh. We spoke before she headed into Canyonland’s Maze District with her partner, fellow freelancer Brendan Leonard (of semi-rad.com fame).

While it’s glamorous and re- warding scribbling words for a living, Oliver reminds us that being a professional creative in the outdoor industry is, at the end of it all, still a job. If you’re always trying to capture that special something for social media, you’re missing the point. We need to unplug every now and then, she says. “You need a few sunsets that are just for yourself.”

Following Oliver’s presentation is ultrarunner Anna Frost, who, just a few years ago, had to take some time off of racing for a few personal sunsets. An athlete

her whole life, the New Zealand native stumbled into trail running as a career not because she woke up one day thinking she wanted to be a professional runner but because she just kept following her passion, which led to opportunity.

One day, after a bout of injuries, the passion froze, and “Frosty,” as she’s better known, lost sight of who she was. She threw away her running shoes and sank into depression. “When I couldn’t run, I didn’t know who I was,” she says. “I had to work hard to remember I’m enough as a person.”

Her long crawl from rock bottom began simply with learning how to breathe again. With the support of family and friends, Frosty eventually made peace with the reality that she didn’t need to be perfect to be complete. Failing and falling were OK – and even necessary – to get her where she is today, thriving as one of the world’s greatest mountain runners. She is also an ambassador for SisuGirls, a global community founded on the Finnish word, “sisu,” meaning resilience.

“You can strive to do something better, but you’re always going to be enough,” says the 35-year-old winner of back-to-back Hardrock Hundreds. “Being perfect is not a thing; aiming for your best is.”

Wednesday night’s speaker, Shannon Galpin, agrees that you can’t be scared of trying and failing; it’s part of the process. Like Frosty, the Breckenridge-based author and founder of the Mountain to Mountain non-profit organization, didn’t set out on a path to become a women’s rights activist. Instead, she graduated high school early and followed her heart, pursuing modern dance.

In 2006, the road opened for a visit to Afghanistan to work with women there, who are among some of the most oppressed in the world. In fact, girls can’t ride horses, motorcycles or – gasp – bicycles unless they’re side-saddle. After a few trips to the mountainous country, Galpin packed her single-speed and set out to become the first person to mountain bike across the Panjshir Valley in north-central Afghanistan.

To the Afghan men, who ride bikes everywhere, Galpin was seen as a “hybrid gender,” welcomed into their homes, fishing and chewing tobacco with them, like an honorary man. She could get away with and was even admired for riding a bike, while these men would never dream of allowing their women to ride. Galpin quickly realized the bike was not just an ice-breaker but a critical tool for eliminating barriers to everything from education to medical care.

“Bikes are vehicles for social justice,” says Galpin, 2013’s National Geographic Adventurer of the Year. “The bike can mean the difference between a life fulfilled and a life of oppression.”

At a recent TED Talk in Denver, Galpin reminded audience members that, just over a century ago, American women who rode bikes were seen as “immoral and offensive.” An integral component of the women’s suffrage movement, the bicycle didn’t only change fashion with the introduction of bloomers; it changed the very fabric of our culture, according to Susan B. Anthony:
“I think the bicycle has done more to emancipate women than anything else,” she wrote in 1896. “It gives a woman a feeling of freedom and self-reliance. The moment she takes her seat ... away she goes, the picture of free, untrammeled womanhood.”

In 2013, Galpin helped launch the Afghan National Women’s Cycling Team, a group that’s far from making the Olympics but is fighting hard on the front lines of women’s rights. They know, like Galpin, that their strength is in their numbers. Galpin says it’s no different for women who live in the United States, who are still dealing with gender issues, like wage inequality and abuse.

When she was 18, Galpin was raped at knife point, nearly losing her life. Twelve years later, her sister was also assaulted. Galpin – who is a single mother – looked at her daughter, Devon, 14, and realized she had to do something.

“This is the time to take action,” she says. “We need to plug in together, into resources that already exist, and seek out mentors. We don’t need to recreate the wheel with more organizations ... there’s strength in numbers. What’s the worst that can happen?”

Galpin points to this year’s womens marches as powerful examples of peaceful activism. Ironically, it was at one of these in London where Women Outside organizer and marketing coordinator at Backcountry Experience, Margaret Hedderman, got reinvigorated for the event she’s been piecing together since last year.

“It was such a positive, can-do atmosphere,” says Hedderman. “I wanted to bring that same kind of energy to Durango. Women Outside is an opportunity for people

to come together (men and women), talk about the outdoor adventures we love, discuss the challenges we face in the future, and create a positive forward momentum.”

Hedderman said she chose speakers with impactful stories who represent sports different from last year’s presenters. Besides an ultrarunner and cyclist, there’s also World Champion freeskier and “Cooking to Conquer Cancer” Founder Alison Gannet, and a slew of influential women in business scheduled to partake in the Outdoor Industry Panel Discussion on Thursday evening.

“Don’t send unprofessional email pitches,” she advises those looking to score a job in the outdoors industry. “Get an advisor or multiple advisors, and work your contacts. (The outdoor community) is a pretty open bunch; we’re not super guarded. You’re probably more qualified than you think you are.”

If these subjects intrigue you, don’t miss Thursday morning’s coffee and a hike with Durango-based Amanda Goad, owner of media shop BoldBrew and founder of the Wild Women’s Project. Goad will lead an informal discussion about entrepreneurship in a mountain town and address the ever-looming question “How do I build a life and a lifestyle in the mountains?” Goad says it starts with one simple concept: “Having the will to not wait for the right time but to create the right time.”

While both Tuesday and Thursday events are free and open to the public, tickets for Galpin’s presentation at Eolus can be purchased at Maria’s or Backcountry Experience for $28. Tickets include a signed copy of Galpin’s book, Mountain to Mountain, as well as one adult beverage. Prizes from Osprey, Ibex and more are available for the winning, and all proceeds benefit girl-powered and empowering nonprofit, San Juan Mountain SOLES (Sisters On Leadership ExpeditionS).

Unlike other stressful springtime decisions, there’s no sacrifice required for this event. And Mexican Logger release is April 5, so enjoy Euphoria while it’s still here. Finally, don’t be an idiot; wear sunscreen. 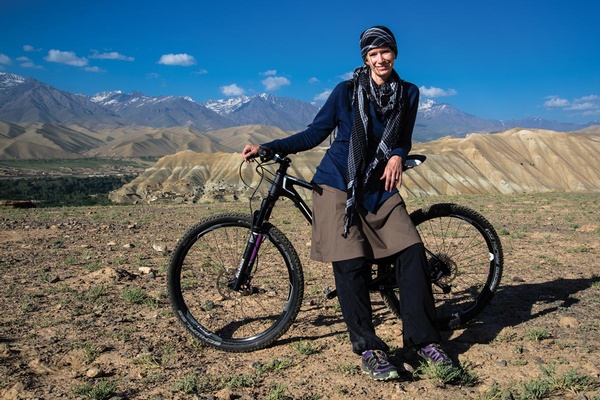 2013 Nat'l Geo "Adventurer of the Year" Shannon Galpin doing what she does best./Photo by Deni Bechard 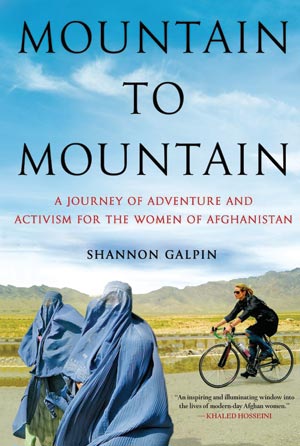