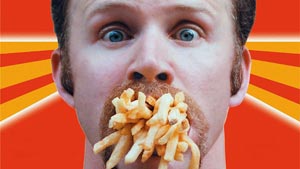 image caption:
(While 2004’s “Supersize Me” helped bring attention to American’s obesity epidemic, the newly released Food Sustainbility Index has gone largely unnoticed. In it, the U.S. is ranked among the world’s bottom three countries for obesity and food waste.)

The report was commissioned by the Barilla Center, an Italian nonprofit that seeks to “promote an open dialogue between science, politics, business and society to push the big topics relating to food, nutrition, well-being and the health of our planet.”

The task fell to the Economist Intelligence Unit (EIU), which shares a corporate umbrella with the Economist magazine. The EUI has a reputation for in-depth analysis that combines the best in science and journalism. For what it’s worth, the EIU had consistently given Trump a better chance of winning than most analysts.

While it may seem obvious to some that agricultural methods, food waste and nutritional are all connected, having numbers and metrics to pour over and compare adds flesh and helps illuminate paths forward.

France had the highest combined food sustainability score, thanks to a healthy population that’s neither obese nor malnourished, an agriculture system that’s low on fossil fuel, chemical and water use, and with aggressive policies aimed at curbing food waste.

According to the report, laws in France “include legal obligations for supermarkets to donate excess food to charities, bans on expiration dates for certain categories of goods such as wine and vinegar, education at the primary school level, and tax incentives (to not waste food).

Italy also scores highly in the index for its laws that incentivize food donation. “Other countries can look to these for ideas and best practices on tackling food waste.”

With Earth’s population rapidly growing, one of the world’s most densely populated nations, India, provides a lesson in the toll that feeding that many mouths can take. India is challenged nutritionally and environmentally by its food system, and despite having such a hungry population, it still manages to rank in the bottom of the food waste prevention category. By co trast, South Korea is even more densely populated than India, with much less land to work with, yet places a respectable seventh in the overall rankings. The index provides country profiles that allow you to drill down into what these two countries are doing differently.
The relationship between food waste and nutritional challenges is especially rich, and often surprising. One third of food produced globally is wasted, rather than consumed. This wasted food amounts to four times what would be necessary to feed the world’s hungry and malnourished. It amounts to a huge release of greenhouse gases, and supports the idea that world hunger is more of a food distribution problem than a food production problem.

Ethiopia was the hungriest nation, and it also scored very high on minimizing food waste. South Africa scored nearly as high as Ethiopia, with the two countries ranking third and fourth behind France and Australia at preventing food waste. And while one would expect, or at least hope, that hungry nations would generally do a decent job at preventing food waste, Ethiopia and South Africa prove to be more exceptions than the rule. Colombia, Brazil, Indonesia and India, among others, all have high rates of food waste and malnourishment.

With the exception of Ethiopia and South Africa, the countries that do the best at preventing food waste are a prosperous lot, including Canada, UK, Japan, South Korea, Germany and Italy. These are countries where obesity rates are largely kept in check.

In a way, this shouldn’t be a surprise, as being frugal is a road to prosperity. But it’s hardly the only road. It begs the question of what about nations that are so rich in natural resources that wealth comes easily?

The answer is to be found at the bottom of the food-waste barrel. The United Arab Emirates and Saudi Arabia both waste extreme amounts of food, while the populations are roughly 70 percent overweight. These two nations also ranked at the bottom in terms of water wasting. It’s almost as if sitting around, eating a Western diet and earning a passive income isn’t great for your health.

While these numbers say some important things about the relationship between available calories and health, they also say something important, if disappointing, about human behavior. We’re barely different from lab rats who will keep hitting the pleasure bar if given the option, regardless of the consequences on our health. When given access to unlimited calories that are completely untethered from any work necessary to produce them, we must decide to either self-moderate or pig out. While Saudi Arabia and UAE provide a cautionary tale, in Europe, and parts of North America and Asia, there seems to be a healthy balance between calories “earned” and calories consumed. Africa and South America, mean-while, are noticeably lagging.

And the United States is perched conspicuously on the precipice.

The U.S. ranks in the bottom three for both obesity and wasted food, right there with UAE and Saudi Arabia. And it makes you wonder what else we, as a nation, have in common with our Gulf State friends.

Interestingly, however, the U.S. scores relatively high in both the nutritional challenge and food waste-prevention categories. I reached out to the report’s co-author Maria-Luiza Apostolescu for help understanding this apparent discrepancy.

“The index looks at both the ‘problem’ and the policy responses to it,” she explained in an email. “The U.S. is scoring quite low for the level of food waste per capita per year because it has one of the highest in the list of 25 countries (277kg/cap/year), but indeed, it has rather interesting policy responses to it, hence it scores quite high in the policy response indicator. In the next years, it will be interesting to see whether these policies have had any impact on the levels of food waste.”

Much of the work being done is at the local level, insulated from the whims and shifting priorities of Washington, D.C. This is good, because I’m not sure the president-elect is going to get around to reading this one.