A dose of Thanksgiving cheer 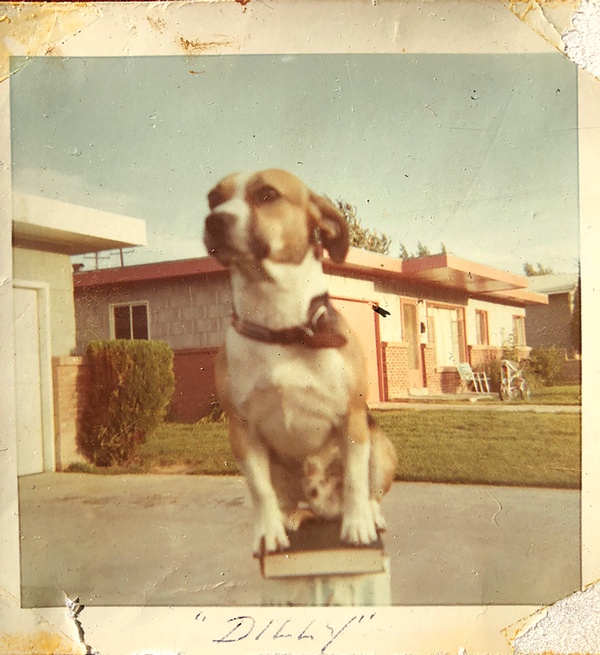 “Don’t play with your food!” As a child this phrase was hammered into my head. But what else was I going to do besides rearrange it on the plate?

“That food costs money!” was another cockamamy mantra that always sparked a dry chuckle. I’d reach into my jean purse, pull out a quarter and slide it over.

My dad couldn’t help but smile, god bless him, while mother, fingers splayed, murmured not to encourage me.

When I finally began to accept the hot food put down in front of me, the least favorite suppers always seemed to be trotted out on the most hungry of nights. Then, it was a contest between homemade bad or store-bought worse. The No. 1 most-hated dish: chicken pot pie. Old-school Swanson, frozen in a kicked-around box; peas, phony carrots and bits of chicken by-product packed beneath a burnt crust. It smelled like a hot version of our dog’s canned food.

“What is your sniffer broken? That’s your dinner!” The odor brought out the barking dogs up and down the block. But it was Dilly, our own, who would place himself beneath the table within immediate, beady-eye contact. We had an agreement: he would discreetly gulp whatever I dropped, just as I asked for a second helping.

This was a win-win that usually went off without inci-ent. But chicken pot pie was different. Poor Dillinger. He was as brave and as dim as his namesake, and couldn’t help but devour the entire pie in one bite. I whisked up the tin and plopped a paper towel over it, stretching back.

As she turned from the freezer, dangling the awaited- for fudgesicle, my dear dog stumbled forward to vomit the entire pie at her Swedish feet. The un-bitten, bright green peas swimming across the worn linoleum made it undeniable. Though Dilly promptly ate the entire thing again, my dessert would have to wait until Saturday.

That was the day Roberta Westbrook and I were left to our devices at the local movie theatre from 11 a.m. to around dark:30. The first course of our sugar feast began with the delicious cavity builder, Double Bubble, just before noon. In the dim light, we would unwrap two pieces and shove them into our small mouths. Our jaw muscles, like baseball players, were fully realized; we’d chew until all the sugar was coursing through our blood. Then, when there was no more of the pink flavor to be extricated, we’d toss it over the balcony, down into the lustrous locks of members of the junior high Kelly Greens. They barely noticed until one would come up with a wad in their hand and start screaming.

Then, sick and wired, we’d wave goodbye until the next time.

Maybe it was the routine sugar overload or pure boredom, but we became malicious in our intent to use food in, shall we say, unhealthy ways. Slumped in seats behind grade-school kids untethered by their parents, we’d wait until the scariest part of, say, “Big Foot 2.” When the kids tipped their little heads back to scream, we’d decant Campbell’s vegetable soup, nicely warmed by our hands, down their small collars. They always cried. Babies. Our favorite usher was finally on to us, though. He hissed through buck teeth: “Get! Get out!”

He made the mistake of pulling Miss Roberta off her seat. Nonchalantly, she tossed the rest of her soup into his glasses and kneed the area between his legs. He slumped into the carpeting. We couldn’t help but feel victorious as we ran off into the wonderful world of alley ways that led us back to TV in an empty house.

One day, I got home to find Dilly laying uneasily upside down. I felt his nose. Very dry. I felt his stomach: ice cold. There on the floor I found the evidence. The ripped-up wrapper of frozen hamburger meat: 2 pounds. There goes dinner! Yeah! When mother asked what I’d fed our beloved dog this time, I pointed to the remains. “Nothing he didn’t already crave.”

I relished in Dilly’s undignified taste; his joy in troubled times. His attitude inspired me one day to put on a lab coat and get to work in the kitchen. I still laugh to think of the cake I made that stained everyone’s teeth black at my grandmother’s fancy retirement party. I tried to explain that the trick was only temporary. But she didn’t speak to me again until my third year of college.

Today, I am a perfectly sane person with a carefully developed palate. (This is sometimes up for conjecture.) It’s mid-November and I’ve got the family coming for Thanksgiving. I look at my list: young Tom turkey, check; carb after carb after carb; check, check, check. Is it worth it? The time, the money, the fat?

My husband, who’s a bit psychic, walks into the room and leans over my shoulder. (He knows I hate this.)

“I hope that’s a shopping list for our friends this year.”

“No. Mom and dad are coming. So is my brother.” He looks unwell.

I don’t see him again until the next morning, and he’s still sulking.

The memory of last year’s Thanksgiving skips through my mind: My dear brother explaining to us not in the know how the killing spree in Las Vegas was paid for by rich Democrats in Hollywood.

“Hillary’s behind it all! Don’t you people get it?”

“Donald Trump’s my friend,” dad expresses with a fishy grin. I can see his face now, already soft with blended whiskey beneath the dreaded red hat. “Donald Trump’s got balls just like a big brass monkey,” said mother. I slam my glass of red wine.

“Really, mom? Is that what you and Melania discuss in your private texts? Our president’s ginormous genitalia?!”

My poor husband tries to catch my eye, which suddenly caught a speck of pepper. I tear off for the bathroom, where I vape blueberry sativa until I calm down.

This year I’d like to conjure up something that will bring us all closer. But what? I thumb through the paper. I see ads selling recreational herb. Wait. Could this be a solution? Dare I mess with the food, just a little? (My grandmother just turned over in her grave.)

I could, let’s say, boil some green shake into a flavored brine and squirt it into the appendages of the turkey; and/or use it as cannabutter in a virtuous apple pie crust. One (though not both) might just switch the conversation from piss-poor politics to something more important like love and happiness. Perhaps. And why not? My parents don’t get blood tested. But my brother? Ethics, smethics. It’s time we come together as a family and have fun. Loosen up. Live a little! I mean, no one’s breaking the law here. We don’t drink and drive. And so reader, I’m going for it. I empty an ounce of weed into a slow-cooker, along with a pound of butter. Suddenly I remember why I vape: because I can’t stand the grassy smell of marijuana. The phone rings and guess who? It’s Roberta, now a skinny dietician, calling from her home outside of Denver, one she shares with 14 rescue beagles and a Siamese cat.

I remind her of the liberal laws of Colorado.

“That doesn’t make it right. It’s like feeding pigs meat. Can’t you come up with a better way to decatastrophize the holiday?”

I ask if she has any puppies left.

And just like that, the Thanksgiving I’d dreaded is now the most anticipated in recent memory.

“I can get him to you by Wednesday.”