A new way to 'mow dandelions' 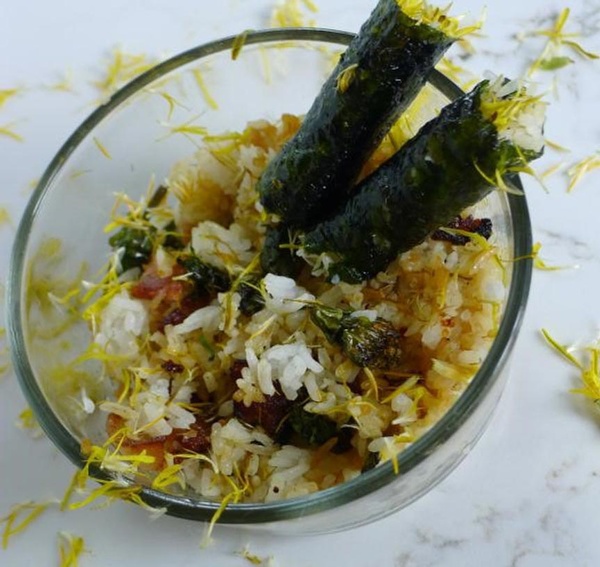 We are born into this world loving dandelions.

We grow up playing with them, blowing seed heads and rubbing the yellow flowers on our faces. Our country was born loving dandelions, having been brought – intentionally – on the Mayflower by the pilgrims, presumably as an easy source of nutrition but also perhaps for its medicinal value as a digestive aid, blood thinner and its many other uses.

Somewhere along most of our personal journeys, the grownups manage to convince us that dandelions are actually bad, not good, because of what they do to the grass monocultures that most Americans cultivate instead of food. My wife is the outlier who would have me veer the lawnmower around a dandelion, which are like the sacred cows of our yard. But unlike most people who worship sacred cows, she eats the object of her reverence.

In fact, she’s got the whole family doing it, which is no mean feat. Human beings may be born with an appreciation
for the aesthetics of dandelions, but not so much for the flavor. You could say it takes work to overcome that bitter hump, but it’s really a matter of appreciating the benefits and associating them with those bitter flavors, as I’ve managed to do with bitter foods like beer, chocolate, coffee and other bitter foods that make me feel good.

I try to pay as much attention to how something makes me feel afterwards as I do to how it tastes, and dandelions make me feel good. So it isn’t surprising to learn they are full of nutrients like carotenes, antioxidants, calcium and vitamin A. The secret to eating dandelions is a decadent sauce.

The entire plant is edible, from the tip of its tenacious taproot to the bright yellow pollen in the blossom. While bitter is the dominant flavor throughout, there is complexity as well. The flowers have an aromatic flavor that has been likened to banana or licorice.

Some dairy farmer friends of mine say that their butter becomes noticeably more yellow after the dandelion flowers appear in spring. When you drop a dandelion in butter, dandelion-tinted or not, some magical stuff happens. The flower waves its petals for a few minutes like a dying creature, and slowly browns, absorbing butter,

shrinking down to a crispy nub that tastes like artichoke with a faint, intriguing note of bitterness.

There are two basic approaches to dandelion eating: bury the bitter flavor, or work with it. Either way, a rich sauce is involved. Most examples of burying involve cooking, while the more daring approaches leave the plant raw. We consume bitter greens with a salad dressing

But for many of us, the right sauce may be that into which we dip our batter-fried dandelion blossoms. Or perhaps it is the bitter beverage that washes down this most spongy of beer sponges.

The only food I like deep-fried is seafood, which is why I batter my dandelions with a hint of the ocean. I hit the supermarket for a box of Tony Chachere’s seasoned Creole fish fry mix, which contains a mix of corn flour and corn meal, in addition to seasonings. The checkout guys were excited about my dandelion plans.

The cashier told me he likes making dandelion leaf tea with cinnamon. The bagger said it’s crazy people hate them because they are an important source of nectar for bees at times when no other flowers are open. “Some-times dandelions are, like, the only option.”

At home, I made an egg wash so the batter would stick to the dandelion flowers. It contains one beaten egg with a splash of cream, a shake of garlic powder, a few drops of fish sauce and a teaspoon of oyster sauce. Oil from a jar of anchovies would work too. I dumped the Creole corn coating in a pan, and went outside for some dandelions.

It was sunset time, and the sky was beautiful. My wife was in the garden, and all of the dandelion flowers were gone. Every single one. I assumed she was responsible, but she informed me that dandelion flowers close up at night, so I needed to look a little more closely. And sure enough, there they were, tight buds, pointing straight up, with tufts of yellow poking out the tips. Plucked them in my socks reaching in from outside the garden.

To deep fry open or closed flowers, first wash them and let them dry. Drop the blossoms in the egg wash, pull them out one at a time, and roll each flower in the breading.

Heat an inch of olive oil to 300 degrees, and drop the flowers in. Cook until they are golden brown all around. Remove and drain.

They really do taste like little animals, like insects would taste if insects tasted good. I ate them as fast as I usually eat fried calamari, dipped in a sauce of mayo mixed with salsa.

Another approach to eating dandelions is to just eat the yellow petals. If you pinch and squeeze the sepal area behind the petals, you can work them out. They can be added raw to anything, from salad to sushi to pancakes. They make a striking garnish for a soup, and the way they dress up rice is perhaps my favorite way to eat dandelion flowers.

Tossing those bright stamen into the grains of jasmine or basmati rice is kind of like a poor-man’s saffron rice, with a similar pollen-y glow. Whole dandelion buds can be added too, raw or cooked, to any dish at virtually any point, as can the leaves, typically chopped. Topped with some crumbled nori sheets, soy sauce, sesame oil and hot sauce, the bitter dandelion flavors disappear into a symphony of other strong, wonderful notes. My wife’s favorite cooked dish is dandelion leaf mashed potatoes. The bitter power of the dandelion can give pizzazz to the bland and balance any strong flavor, be it spicy, sweet, salty or fatty, and even more bitter.

The key is to get yourself some dandelion parts from a young plant that hasn’t been sprayed by the nozzle of a pesticide applicator or territorial animal. This can be a challenge in the city, but if you understand the habits of dogs it’s possible to find pristine specimens in public spaces – including some tasty shade-dwelling varieties – throughout the summer. They are free, they are handy and frankly, they are pretty dandy.