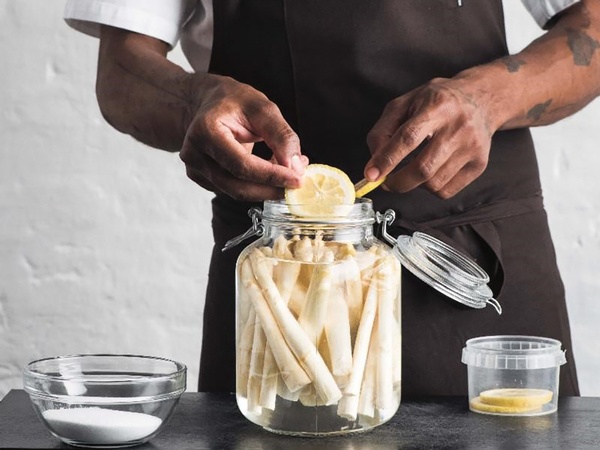 Excerpted from Foundations of Flavor: The Noma Guide to Fermentation by Rene Redzepi and David Zilber./ Photo by Evan Sung

As you read this, most of Germany will be eating its way into a feeding frenzy known as spargelzeit, a two-month long, white asparagus-fueled celebration of asparagus and spring. About 125,000 tons of white shoots will be consumed, plus another 15 tons of green, by summer solstice. After that, the asparagus fields are given a rest, to ensure a bountiful harvest the following spring.

Until the harvest stops, the festivities are on, from roadside stands to grand festivals, with peeling contests and asparagus queens wearing asparagus crowns, hikes along trails on asparagus farms, and every other kind of asparagus enjoyment they can think of. All the while, more of the party’s raison d’e?tre sits underground, or at least with the shades drawn, waiting to feed the next round of revelers.

White asparagus is the exact same variety as green but is grown in complete darkness, traditionally under a layer of earth. The shoots don’t produce chlorophyll, or other molecules related to photosynthesis, unless they sense light, so the shoot remains unpigmented. Apparently those photosynthetic materials have flavor. Green asparagus is grassy and earthy, while the flavor of white asparagus is more subtle.

White asparagus is labor-intensive to grow, expensive to buy and a pain-in-the-neck to prepare, because it must be peeled. White asparagus also has less protein, calories and fiber than green. This is a lot of work and expense for a relatively tough, nutrient-poor and arguably bland version of its above-ground, counterpart.

Perhaps the satisfaction is rooted in aesthetics. Freshly unearthed and dusted with brown dirt, the white shoots are shockingly bright. Eating them gives the impression of hungry humans not waiting for spring, clawing through the dark earth in search of anything to eat.

That’s my image, at least. But from what I’ve read, if you mention spargelzeit to the average German, their mental screen likely flashes a serving of light yellow spears lined shoulder-to-shoulder on a plate, flooded with Hollandaise and flanked with peeled potatoes. That, with or without ham, is the most popular serving method and makes one wonder if spargelzeit is truly an embrace of spring, or a drawn-out goodbye to the pale, decadent pleasures of the winter diet.

Since one of the most striking qualities of white asparagus is its bright, translucent luminosity, I looked for ways to make it that allow us to enjoy the spectacle. The Lacto White Asparagus recipe from The Noma Guide to Fermenta-
tion was a logical place to start. The radiant shoots sit there in jars, visible from all sides, allowing sunbeams to pass through their pigment-free bodies.

Lacto refers to a type of micro-organism, not to milk.

Making these pickles is an extremely simple process that requires only salt and water. The subtle flavor that develops becomes more intriguing by the day, with creeping umami and pleasant, lingering bitterness. It’s hard to imagine these luminescent sticks of lemon perfume being as good if they had been made with green asparagus, which I guess means I’m warming up to white.

I have an asparagus recipe of my own that’s tailor-made for white asparagus, and the celebration of pale foods in general. The asparagus is cooked, half-submerged in savory milk, in a jar inside a double boiler. The thick lower parts, which are most in need of cooking, simmer in the milk sauce, while the tips receive a touch of steam from the double-boiler. The cut ends absorb the milk into their vasculature, giving the asparagus a chowder-like flavor, while the tips remain worlds apart, lightly seasoned and barely cooked.

I tried this recipe with both colors of asparagus, and now I’m eating any crumbs of my early skepticism of white asparagus that remain, as I feast on white asparagus itself. It has a pleasant, clear and simple flavor that’s less busy and even less earthy, despite living in the ground.

An average-sized bunch of asparagus will require two pint-sized Mason jars, or similar vessels. You also need a pot large enough to stand asparagus up inside while allowing room to cover the pot.

1 bunch white asparagus, the thickest spears you can find

Peel the white asparagus, starting from just below the tip where the fiber starts. Trim the bottoms if you wish.

Put the lemon slice in each jar, flat against the bottom. Add the spices and garlic, and fill the jars halfway with milk. Add the asparagus spears, with the cut ends against the lemon, and more milk if necessary to bring milk level to an inch below the rim.

Put the jars in a pot with enough water so that the waterline is an inch below the milk level inside the jars. Sprinkle a pinch each salt and pepper onto each jar from above. Turn heat to high and boil.

While that’s going, simmer the peels and cut bottoms in two quarts of water, along with any pieces of carrot, onion or celery you may have, old or new, scrap or fresh. Cook scraps for about an hour, and strain. Use as a stock or serve as is, salted. Or add leftover asparagus milk, to taste.

After boiling the asparagus for 15 minutes, put the lid on, and turn off the heat. After five minutes, remove the jars and let cool to room temperature.

Pluck the spears from the jar, holding the dry, sauce-free tip in your hand. Munch the saucy base, toward the tip, dipping as necessary.